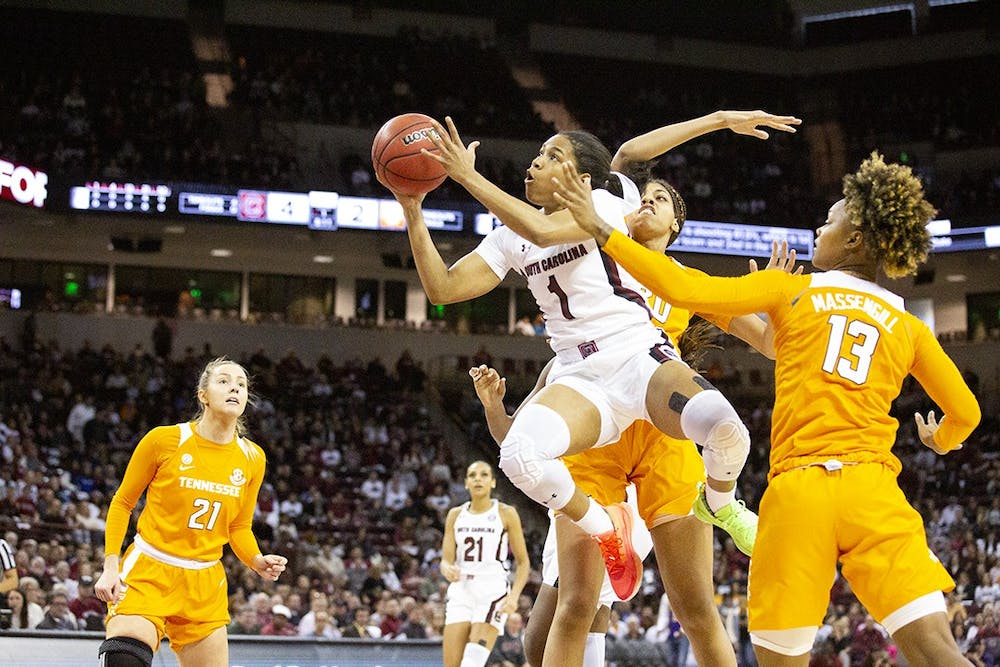 No. 1 South Carolina remains undefeated in SEC play with a win over No. 22 Tennessee

The No.1 South Carolina women’s basketball team remains undefeated in SEC play after a 69-48 defeat of No. 22 Tennessee, the biggest win over the Lady Vols in program history, on Sunday afternoon at Colonial Life Arena.

In the first half of the game the Gamecocks shot 43% from the field, and the Lady Vols shot 31%.

After the first media timeout, the Gamecocks went on a 13-5 run to end the opening quarter. South Carolina's defense didn’t allow the Lady Vols to score for the last 2:33 of the first.

South Carolina went on another 10-2 run after the second media timeout of the day, prompting a Tennessee timeout.

The Lady Vols were then able to slow the Gamecock offense a bit during the late minutes of the first half, but South Carolina still maintained a 38-23 lead going into the locker room.

Tennessee continued this defensive momentum into the third quarter as they cut the South Carolina lead to ten points, but the Gamecocks responded by building their lead back up to 20 at the end of the quarter.

Gamecocks freshman guard Zia Cooke led South Carolina in points with 20 along with three rebounds and two assists. This is Cooke’s fourth 20+ point game this season.

“I just tried to slow down, I was starting to go a little too fast,” Cooke said. “Coach [Staley] took me out just to get me a breather and for me to slow down and rethink some things and once I did that, everything fell right back into place like the first time.”

Senior forward Mikiah Herbert Harrigan was also a big contributor as she led the team in rebounds with eight, along with nine points and two assists.

The Gamecocks limited turnovers with only six and took advantage of Tennessee’s turnovers as South Carolina scored 28 points off turnovers alone.

“It was huge for us to speed the game up,” Staley said. “To allow our guards to get up and down the floor. I thought we just did a really good job of just disrupting and forcing them to play a little bit quicker than they wanted to play and sometimes that turnover led to a dead ball situation, sometimes it was a live ball turnover where we converted on the other end in transition.”

The Gamecocks will hit the road on Thursday as they travel to Fayetteville, Arkansas to take on the Razorbacks. The Gamecocks and Razorbacks are set for an 8:30 p.m. EST tip and can be seen on the SEC Network.