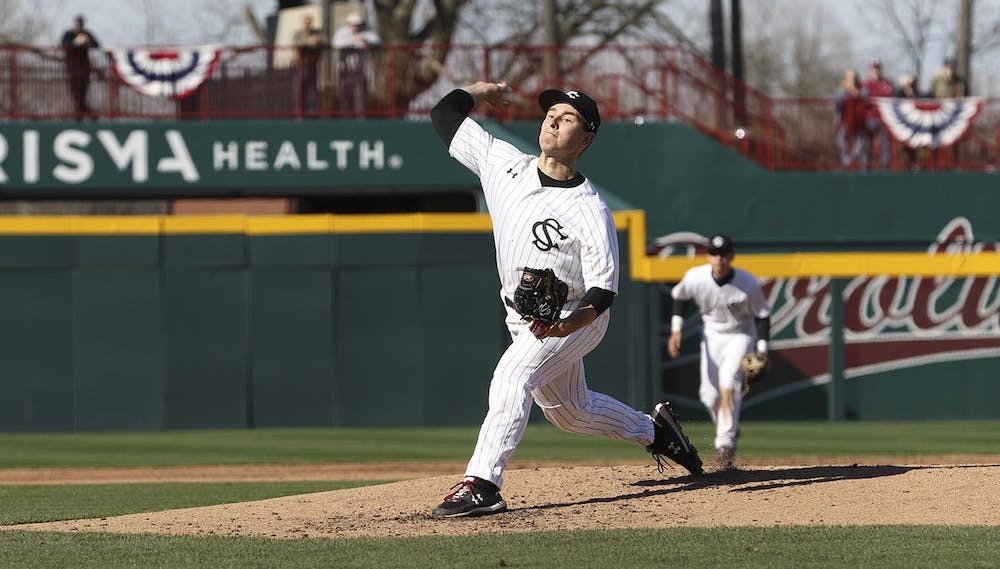 Kerry started accumulating his strikeouts early in the first inning, as the Crusaders struck out three times to begin the game. The South Carolina bats followed suit in the bottom frame with five runs.

“Any team wants to be balanced and have multiple ways to score,” South Carolina head coach Mark Kingston said. “We scored with power, we stole some bases, we got a safety squeeze down, just have to be multi-dimensional.”

The Crusaders responded in the next inning with three runs of their own, including a two-run homer from Holy Cross freshman Ben Dellacono.

Kerry didn’t allow another run until he was pulled after the fifth inning with 89 pitches.

South Carolina scored three more runs in the next few innings, with a solo homer from Eyster in the fifth, a two-run homer from sophomore infielder Wes Clarke and an RBI double from freshman catcher Colin Burgess to give the Gamecocks a 9-3 lead.

The Crusaders responded in the eighth with a solo homer from Holy Cross junior infielder Cam Meyer and bases loaded with one out. However, junior right-handed pitcher Parker Coyne struck out back-to-back batters to end the Crusader threat and eventually give the Gamecocks the win.

Although Kerry’s 12 strikeouts were crucial in the first half of the game, Eyster’s two RBIs on two hits and Clarke’s three RBIs on three hits were important as well.

“We have a lot of good hitters who can get — one day it could be the beginning of our line up gets all the RBIs, another day the end of our lineup. It just depends on the situation and timely hitting, and it happened to be me and Eyster today," Clarke said.

One of the key aspects of Saturday’s win for South Carolina was the Gamecocks’ five-run first inning to jump into an early lead.

“You always want to try to get out front and score first and try to control the game like that,” Kingston said. “It allows your pitching to kind of settle in and do what they want to do.”

The Gamecocks beat Holy Cross for the weekend series on Sunday and now prepare for Winthrop on Tuesday, Feb. 18. First pitch is set for 4 p.m. at Founders Park and can be streamed on SEC Network+.