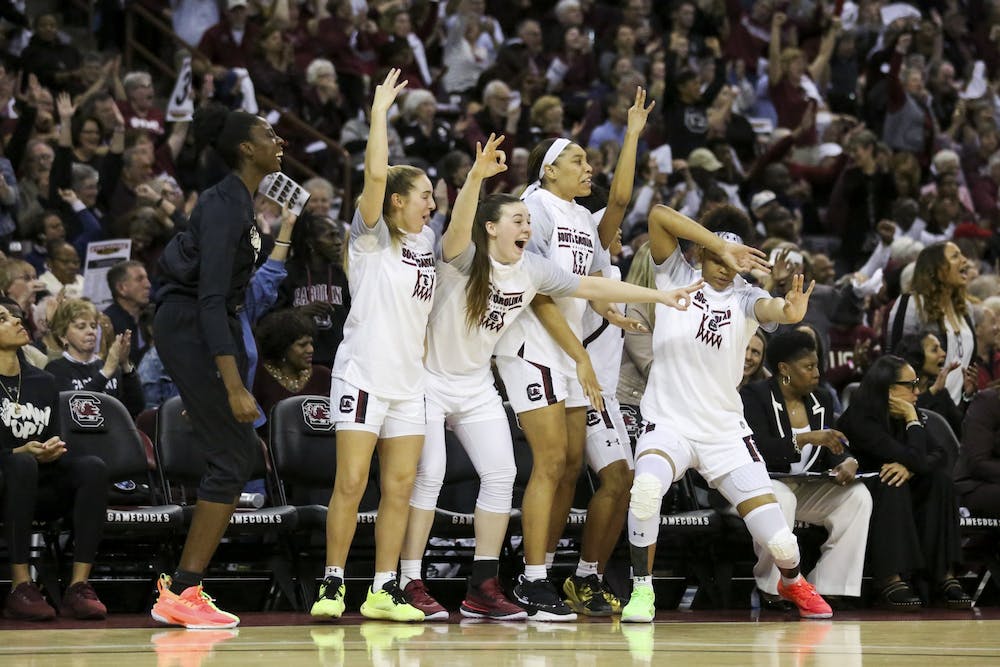 No.1 South Carolina wins first game in program history against No. 5 UConn

The No. 1 Gamecock women's basketball team defeated the No. 5 Huskies 70-52 in a sold out stadium on Monday at Colonial Life Arena. This is the first time South Carolina has beaten UConn in nine meetings.

Early in the first half, freshman forward Aliyah Boston blocked a shot that led to a layup in transition by freshman guard Brea Beal.

The second quarter consisted of more offense from both squads, specifically from senior guard Tyasha Harris. Harris scored 10 straight points for the Gamecocks, and their lead extended to 20-9.

Freshman guard Zia Cooke hit a 3-pointer with under 20 seconds remaining in the half, giving South Carolina a 35-23 lead heading into the locker rooms. The Gamecocks shot 73% in the second quarter.

South Carolina opened the third quarter on an 11-2 run and had its biggest lead of the game, 46-25. Boston recorded another double-double halfway through the third quarter when she grabbed her 10th rebound. The Huskies ended the quarter on a 7-0 run, bringing the score to 54-41 following a floater at the buzzer.

Throughout the fourth quarter, the Gamecock defense caused another five turnovers. Boston scored with an assist from Harris, making the score 56-43. South Carolina finished the game on a 6-0 run, capped by a Cooke steal and layup.

Harris finished with 19 points and 11 assists, notching her first double-double of the season for the Gamecocks.

"She never tired today," Staley said. "Overall, this is probably her most complete game."

Boston earned another double-double with 13 points and 12 rebounds.

South Carolina forced 15 turnovers on defense against UConn, led by three blocks from senior forward Mikiah Herbert Harrigan and three steals from Boston and Cooke each.

The No. 1 Gamecocks host the Auburn Tigers Thursday at Colonial Life Arena. Tipoff is at 7 p.m. and the game can be watched on the SEC Network.