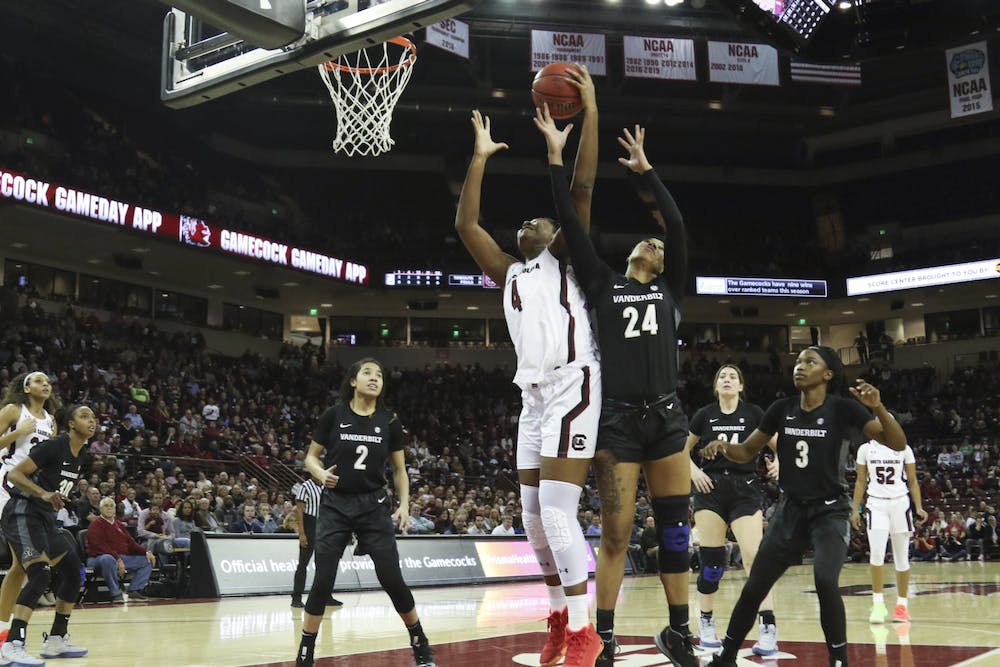 The No. 1 South Carolina women's basketball team shut down Vanderbilt 95-44 on Monday night. The Gamecocks are first in the SEC and third in the nation in scoring margin with +26.6.

The Gamecocks had the same starting lineup on Monday that they have had all season. Freshman guard Zia Cooke put the first 3 points on the board for the Gamecocks. Cooke has scored double digits in 10 SEC games this season, including 10 points against Vanderbilt.

At the end of the first quarter, the Gamecocks led the Commodores 30-10 after a 17-0 run that spanned over five minutes. Freshman forward Aliyah Boston led the team in the first quarter with a total of 8 points and seven rebounds.

Heading into halftime, the Gamecocks led by 31 points with a score of 52-21.

Despite senior guard Tyasha Harris leaving the game in the third quarter due to an apparent injury, she still had a total of five assists in tonight's game. She leads the SEC in assists per game with 5.4.

"We're just taking precaution," Gamecock head coach Dawn Staley said. "Ty could have probably finished the game, but she did her job, she got us a big lead."

Gamecocks are No. 5 in the nation in field goal percentage defense.  They shot 51% from the field to the Commodores' 28% Monday.

"I want to be as close to who we are and what we've been all season long, just throughout the remaining of our games," Staley said.

Staley made sure other players got playing time in: At the start of the fourth quarter, each player on the court was not a starter.

Gamecock junior guard LeLe Grissett made a block and turnover, and sophomore forward Elysa Wesolek scored a 3-pointer in the fourth quarter for South Carolina. Grissett scored a game-high 14 points.

South Carolina will face the LSU Tigers in its next game at Colonial Life Arena on Feb. 20. Tip off will be at 7 p.m. and the game will be broadcast on the SEC Network.