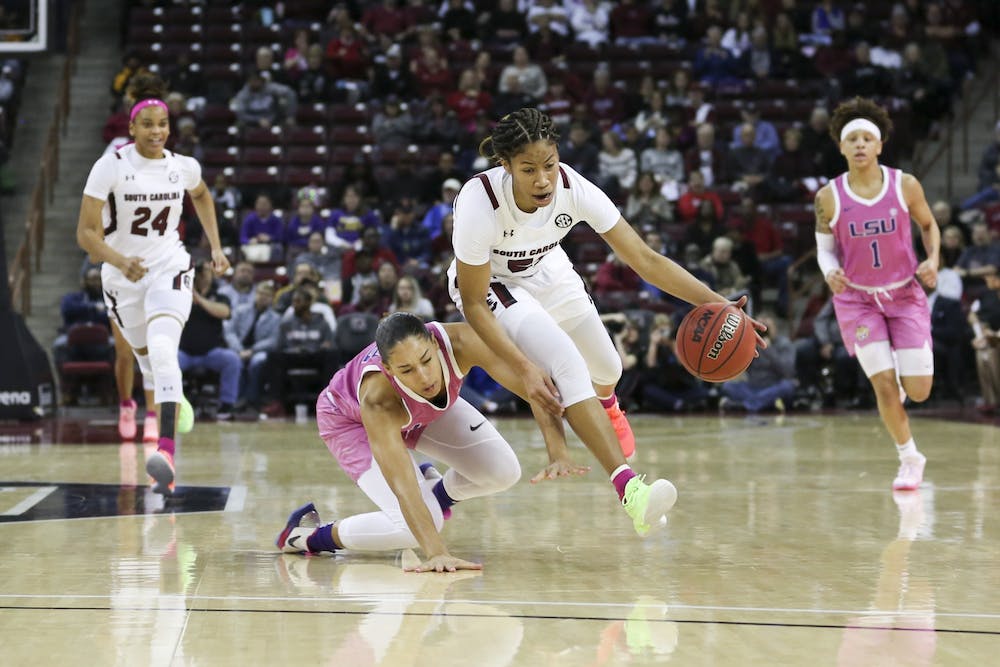 Dawn Staley and the women’s basketball team improved to 26-1 tonight after defeating the LSU tigers 63-48.

Freshman forward Aliyah Boston won the tip-off for the Gamecocks, but LSU was able to get on the board first after senior Jaelyn Richard-Harris stole the ball leading to a bucket down low from junior Awa Trasi.

Boston was able to score the first bucket for South Carolina after grabbing a rebound from a shot she missed, giving the Gamecocks their first points.

Boston later scored off of a missed shot from freshman guard Zia Cooke with 7:25 left in the first quarter.

However, LSU junior Jailin Cherry got a steal that led to two points for the Tigers.

The Gamecocks then got the ball after a LSU turnover. Harris grabbed one of her two steals of the night and kicked it to Herbert Harrigan who made a two-point jump shot.

Led by Aifuwa, the Tigers outscored the Gamecocks 12-9 in the second quarter and managed to cut the lead to six.

However, South Carolina was able to go into halftime with a 32-26 lead.

South Carolina has averaged just over 13 turnovers per game so far this season. However, in this game, the Gamecocks turned the ball over 13 times in the first half.

Led on the defensive side of the ball by Boston and the offensive side by Herbert Harrigan, the Gamecocks were able to outscore LSU 18-10 in the third quarter.

The duo led the Gamecocks on an 9-0 run at one point in the third, but a three-point shot from junior Khayla Pointer quieted the crowd again.

Gamecock Herbert Harrigan ended the third quarter scoring by back to back possessions and blocking a shot from Pointer.

In the fourth quarter, both teams traded buckets to start off, but after fouls and turnovers on both sides, both teams found themselves scoring less than previous quarters.

Every player that touched the floor tonight managed to have a foul called against them, LSU had 18 total player fouls while South Carolina had 16.

By the time the teams were finding the net again, the clock was nearing zero. Before the game ended, though, Boston blocked one of her five shots of the night. Putting her at 74 total on the year, setting a freshman single-season block record.

A steal by Gamecock junior forward Lele Grissett sealed the game, and South Carolina added another win to their record.

LSU shot 36% from the field while South Carolina shot 49%. From behind the three-point line however, LSU shot much better, shooting 43% while the Gamecocks only shot 18% from three.

After the game, LSU head coach Nikki Fargas said, “Well if you had told me that we were going to hold South Carolina to 63 points, I would’ve thought we might’ve had a chance of taking this game, late game, but to South Carolina's credit their interior defense is one of the best that we’ve played.”

Head coach Dawn Staley acknowledged LSU’s first half defense: “Took us a while to make an adjustment to that, when we were able to play fast and get up and down the floor and not let them set their zone up for most of the second half.”

The Gamecocks next game is at Kentucky on Sunday, Feb. 23 at 2 p.m. The game can be viewed on ESPN 2.