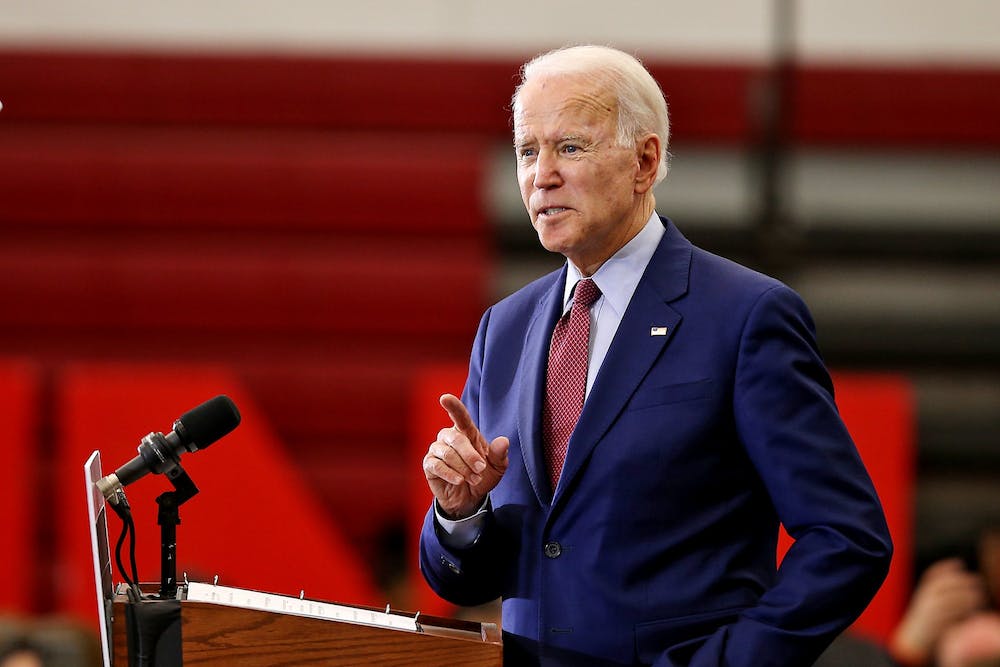 Editor's note: This column discusses sexual assault encounters and may be triggering to some readers.

With recent accusations rising of presidential candidate Joe Biden’s history of sexual misconduct, voters should consider not only the politics of their chosen candidate but also their character. Only one candidate currently remains who has not personally been accused of sexual harassment of any kind.

It should not be considered a political act to believe women who accuse men in power of sexual harassment or assault. It is simply a moral one.

While any allegations of sexual misconduct should, of course, be subject to the same due process of any other crime, it is statistically unlikely for these accusations to be false. Though there is limited research on the topic, only about 2% to 8% of sexual assault allegations are falsified. These reports give voters reason to err on the side of caution when it comes to casting their ballot.

2016 showed us that charges of sexual assault do not impede a candidate from winning an election. Donald Trump, the only current Republican candidate in the 2020 election, has had over 20 allegations of inappropriate behavior, including groping, kissing and one accusation of rape.

Trump is not the only candidate who faces allegations of misconduct. Recently, Biden has come under fire due to Tara Reade’s accusation of sexual assault. Reade said that, in addition to touching her in an unsolicited manner, Biden nonconsensually pushed her against a wall and digitally penetrated her.

Other women have reported Biden stroking them and making them feel uncomfortable. Lucy Flores recounted an instance where, before endorsing her at a rally, Biden smelled her hair and planted a “big slow kiss on the back of [her] head.”

Flores wrote the encounter made her feel “uneasy, gross, and confused.”

We, as voters, should take all of these accusations more seriously. For the love of our country, we should hope to find a candidate, regardless of party affiliation, who has proven to treat all people, including women, with respect.

Sexual assault is not a partisan issue. Women face discrimination and harassment regardless of their politics.

It is our responsibility to keep their assailants from being elected into office.

Bernie Sanders’ campaign was not immune to accusations, either. His 2016 campaign was marred by several counts of sexual harassment by top male campaign staffers. Additionally, there were records of pay inequality, with findings that some female workers made thousands of dollars less than their male peers.

Sanders apologized for the harassment, tweeting that “[w]hat they experienced was absolutely unacceptable and certainly not what a progressive campaign, or any campaign, should be about.”

Since 2016, Sanders has tightened sexual harassment policies, including adding an independent human resources department for any cases to go to.

These recent accusations against Biden, the issues with Sanders’ campaign and the many women who have spoken out against Trump are all harsh reminders that, in spite of any rhetoric in favor of women’s rights, the man representing our country in 2021 will have, in one way or another, been culpable for some form of oppression against women. This leaves those states who have yet to vote in the primary in a difficult predicament.

The voices of women have been systemically shunted out of this election.

Politics cannot be the sole thing that determines our vote. We can judge candidates for their reaction to these accusations. While Sanders’ campaign is not spotless, he changed his policies after 2016 instead of being dismissive of women’s claims of unjust treatment.

I wouldn’t dare call myself a Sanders supporter, but in order to truly prioritize women’s rights — my rights — the difference between a sexual assailant and someone unaccused should take precedence over their identities as moderate and progressive.

In 2016, we decided that a candidate’s treatment of women shouldn’t affect his ability to get elected. Let’s not make the same mistake twice.