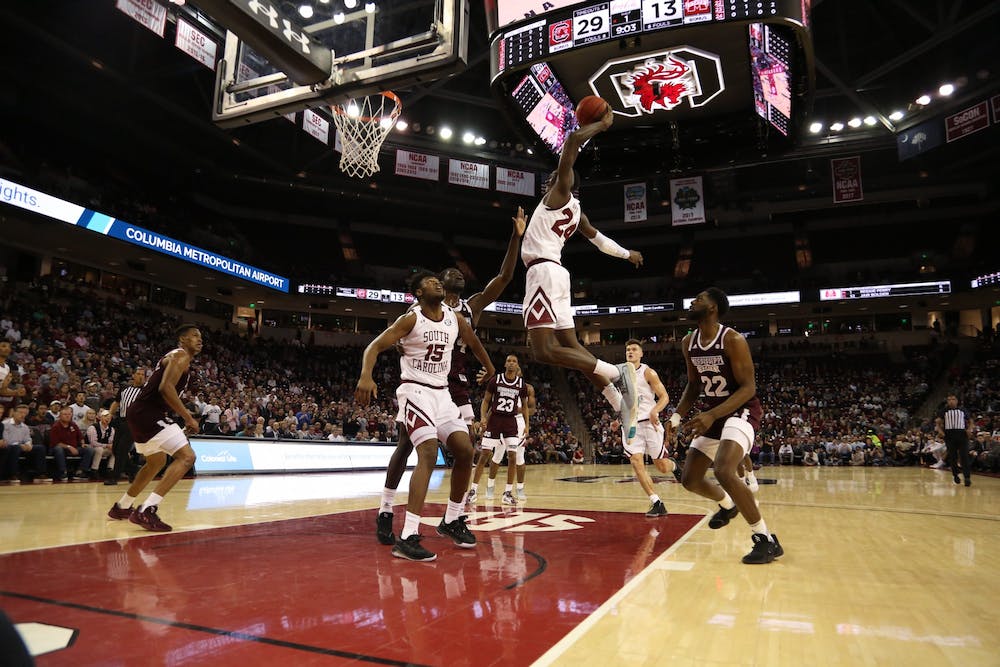 South Carolina trailed in the first quarter 9-4 to Mississippi State heading into the first media timeout. It was not until junior guard Jair Bolden hit two consecutive three-point shots that the Gamecocks took the lead 13-11. The Gamecocks went on a 18-2 run that increased their lead to 31-13.

The Bulldogs trailed the Gamecocks 40-38 at the half. Sophomore forward Reggie Perry scored 11 points and grabbed nine rebounds in the first half for the Bulldogs.

The Gamecocks never lost the lead in the second. With 13:01 remaining in the second half, sophomore forward Keyshawn Bryant threw down a dunk to put the Gamecocks up 57-49. With the Bulldogs rallying late, sophomore guard A.J. Lawson made a layup to expand the lead to 75-66.

In his last game at Colonial Life Arena, senior forward Maik Kotsar scored 20 points, helping to secure the win for the Gamecocks down the stretch. After the game, Kotsar took a lap around the court, thanking the home crowd one final time.

“Meant a lot. First of all, to play your last game at CLA, get the win, just to play home with the guys one last time, it just meant a lot. I want to thank the fans for coming out and showing love,” Kotsar said.

Perry dealt with foul trouble all night for the Bulldogs but went on to finish the game with 17 points and 16 rebounds. Senior guard Tyson Carter also added 24 points for Mississippi State.

The Gamecocks defense forced 14 turnovers and held the Bulldogs to 39.3% from the field for the entire game. The Bulldogs were held to 5-14 from behind the arc and 22-56 overall.

“I thought we were pretty good defensively the first 12 minutes or so of the first half, and then, you know, we got in a little foul trouble at the guard spot, and we start slipping,” head coach Frank Martin said. “I thought we battled defensively today. I wish we would have battled like that a couple of days ago.”

The South Carolina Gamecocks look to face the Vanderbilt Commodores in their last regular season game on Saturday. Tip-off will be at 12:30 p.m. and can be watched on SEC Network.