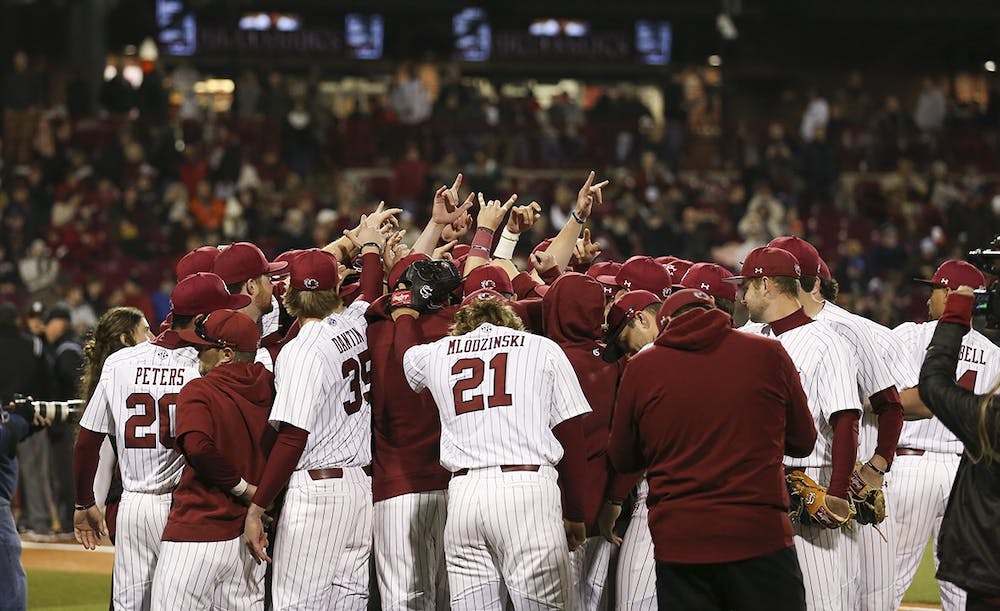 Over the weekend, the South Carolina baseball team faced off against Clemson. In the three-game series, both South Carolina and Clemson hosted one game while the neutral site game was set at Segra Park, home of the Columbia Fireflies.

After a loss at home, the Gamecocks won at Segra Park. Clemson broke the tie and won at home, which resulted in South Carolina losing the series 2-1.

The South Carolina Gamecocks fell 7-1 to the Clemson Tigers in the first game of their weekend series.

Redshirt sophomore right-handed pitcher Carmen Mlodzinski was given the start for the Gamecocks, pitching a total of six innings in the contest.

He ended with eight strikeouts and only one walk and gave up six runs via three 2-run homers, registering his first loss of the year.

In bottom of the ninth inning, sophomore outfielder Brady Allen had a pinch-hit solo home run to put the Gamecocks on the board.

South Carolina head coach Mark Kingston acknowledged struggles at the plate and credited the Tigers' performance on the mound, describing their starter as "elite."

The Tigers left-handed junior pitcher Sam Weatherly ended the night with 11 strikeouts in seven innings of work without giving up a hit.

South Carolina ended the contest with 4 errors in the field on the night.

Kingston said, "It was just a tough night and we're ready to move on.”

Less than 24 hours after Clemson’s Sam Weatherly and freshman left-handed pitcher Geoffrey Gilbert's near no-hit versus the Gamecocks at Founders Park, South Carolina competed at Segra Park for 12 hits to lead the way to an 8-5 win.

Gamecock redshirt sophomore right-handed pitcher Thomas Farr picked up the win after playing five innings and whiffing three Tigers' hitters. He gave up one run and two hits along the way.

Despite inheriting a jam in the bottom of the ninth and facing the tying run at the plate with the bases loaded at one point, Gamecock sophomore right-handed pitcher Brett Kerry shut the door to pick up the save and even the series up at one game apiece.

On his team turning the page after last night’s 7-1 loss to the Tigers, Kingston said, “That’s what baseball demands. You have a tough day, you gotta bounce back. In the big leagues, they play 162 of 'em. We play 56 in the regular season. You get punched, you gotta be able to punch back the next day.”

After recording three RBIs in the loss, Clemson sophomore right-handed pitcher Davis Sharpe said the Tigers will move on to the series finale at Clemson’s Doug Kingsmore Stadium.

“Tomorrow is gonna be a new day, a new game. We’re going to be energized, you know, Game 3 with the series on the line, so everybody's gonna be pumped,” Sharpe said.

On Sunday, the Gamecocks fell short to the Tigers 5-2 at Doug Kingsmore Stadium.

On the mound for the Gamecocks was junior right-handed pitcher Brannon Jordan. For the Tigers, sophomore right-handed Spencer Strider took the hill.

After one run in the bottom of the first inning for Clemson, Gamecock junior second baseman Noah Campbell hit a two-run single into center field.

In five innings, Jordan gave up one run on one hit and struck out four batters. Redshirt senior pitcher Graham Lawson came in to relieve him in the bottom of the sixth.

“Yeah, yeah, he got close to 90 pitches, left the game with the lead,” Kingston said about Jordan’s performance. “That’s what you want your starter to do.”

In the bottom of the seventh, the Tigers scored four runs by way of a sacrifice fly, two-run double and one-run single. The Gamecocks found themselves behind by a score of 5-2 in the seventh.

At the conclusion of the final game of this series, Gamecock junior outfielder Andrew Eyster was named the winner of the Tom Price Award. For Clemson, Weatherly was the recipient of the Bob Bradley award.

On March 3, the Gamecocks will travel to Greenville to face the Furman Paladins. The first pitch is set for 6 p.m. and can be seen on the SoCon Digital Network.