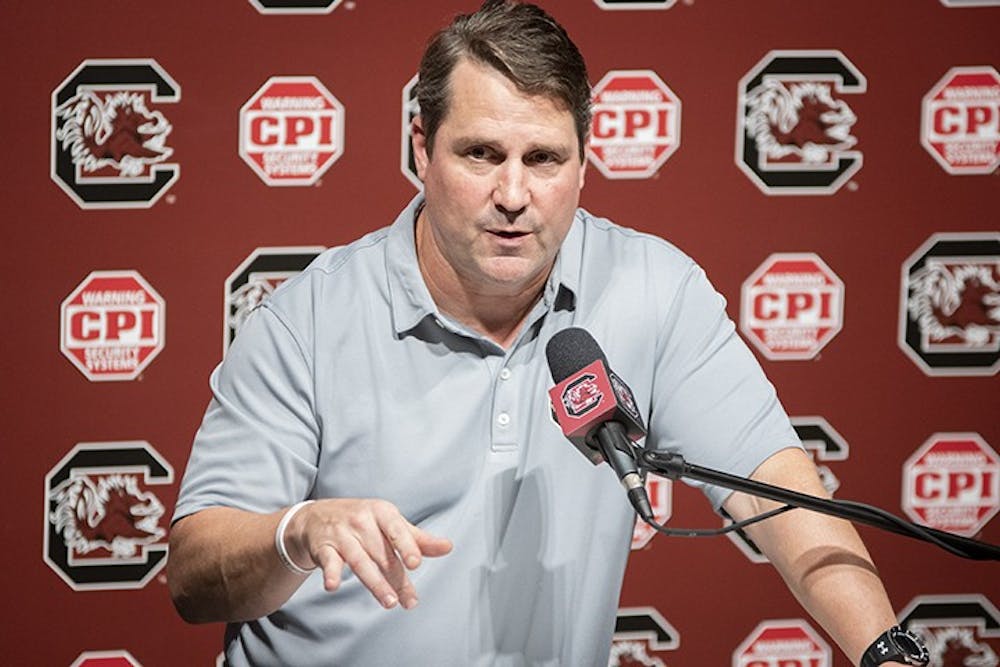 South Carolina football head coach Will Muschamp held a teleconference to give an update on the state of his program in light of the unusual circumstances surrounding the COVID-19 pandemic Monday.

At the opening, Muschamp said he was especially thankful for those at the "front line" of the pandemic and endorsed Feed Our Heroes, a foundation to support healthcare workers.

He declined to speculate about when a decision about the upcoming season might be made, but he said the staff and team would plan as though they are playing this fall until they are told otherwise.

“I think it takes at least eight weeks, minimal, to get ready, a month to get in shape and then a month of practice in order to prepare the right way and keep the student athletes healthy,” Muschamp said.

Until the team is able to reconvene on campus, Muschamp said he and his staff have been developing ways to stay connected with the team and helping new staff members foster relationships with their players. The team has been utilizing Zoom to have meetings and watch film in groups and the Learn to Win app to study plays and game plans and have their knowledge tested with immediate results.

The full coaching staff meets twice each week over Zoom, and the offensive and defensive staffs meet daily.

Muschamp said new coaches, such as Mike Bobo, Rob Wilson and Joe Cox, were all able to settle into the Columbia area before the pandemic shut much of the community down.

The coaching staff communicates with players daily through phone calls, FaceTime or Zoom. The team is meeting with a number of people outside of the coaching staff, including former Gamecock quarterback Connor Shaw, who talks about mental health issues, staying positive and staying connected. Muschamp said Dr. Kevin Elko meets with leadership groups within the team once a week to talk about leadership and adversity in a time of crisis.

Players are also meeting with academic advisers to maintain their eligibility with respect to grades and Muschamp said he was glad the university approved a pass/fail option.

In regard to player safety, Muschamp confirmed that an unnamed player was tested for COVID-19, but the results were negative. He said another player was traveling out of the country but has since returned and was quarantined.

There are eight to 10 players who have been cleared to remain on campus to rehab injuries that they do not have the facilities for at home according to Muschamp.

Muschamp said the league office mandated that teams are not allowed to monitor anything players are doing physically at home, and so he could not comment to what extent players have been able to work out at home. Players are, however, getting creative with how they stay active.

“Vershon Lee sent me a video of him pushing a car, which I thought was pretty good,” Muschamp said.

As far as football, Muschamp said he was grateful the team had five days of spring practice before everyone left for spring break and was subsequently unable to return. He said new offensive coordinator Mike Bobo began the process of implementing his new offensive scheme in that time.

“Would we like to be on campus and practicing and working out and having [the players] in the meeting rooms?" Muschamp said. "Absolutely, but that’s not where we are right now, so we've got to adapt and adjust a little bit about how we’re teaching.”

Going into his fifth year as head coach, Muschamp said he is optimistic about the state of the team noting an improved offensive line, a stacked running back room and a stout defensive front.

“I feel good about where our football team is. You know, obviously, the disappointment on last year, it sticks in your heart there, but I’m looking forward to getting this team on the field,” Muschamp said. “I would emphasize what Gov. McMaster's telling us, and that’s stay positive, stay safe. Social distancing is very important; stay at home.”