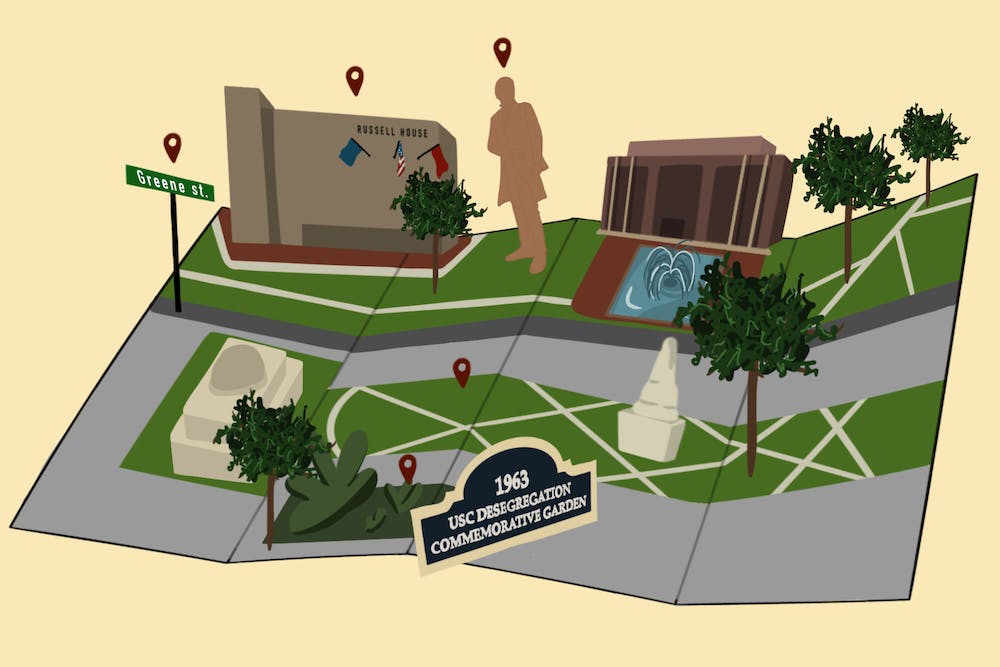 Student Body Vice President Hannah White is working with the Visitors Center to include facts about African American history on campus tours.

White came up with an idea for an African American history tour for a class project in the spring. The project was assigned for her SCHC 325 Historic Preservation in Columbia Today class as a semester-long project for a Historical Walking Tour, working in close cooperation with a community partner.

She chose to partner with USC's Visitor Center, where she is a university ambassador.

“I thought that I should do a tour, being an ambassador, as my semester-long project, specifically about the African American history of campus,” White said.

White’s plan was to take her class on her tour at the end of the school year, but because of COVID-19, she couldn’t do that. Instead, she made it virtual.

White’s website explores the history of the Horseshoe, the Desegregation Garden, Greene Street, Russell House and “The Corner,” where the Richard T. Greener statue is located.

White is looking to use her partnership with the Visitor Center to see if some of her research could be added to campus tours.

“This by no means has any attachment to the university, this was just me as a student in a course taking a class, and I just decided to make this tour,” White said.

Rebecca Johnson, director of the Visitor Center, said White came to her at the end of the school year with her project. Johnson offered for White present her project and talk about ways to incorporate some of her facts into regular campus tours.

“The Visitor Center has been very accommodating when it comes to allowing me to present this information to other ambassadors and even has gone great strides in order to meet with me to incorporate some of these facts within our training materials,” White said.

Johnson said she doesn’t know when some of the research might be added to generalized campus tours because they “haven’t fleshed out any details of the history tour.”

White said she was inspired by her professor, Robert R. Weyeneth, who contributed to the implementation of plaques about slavery on the Horseshoe and created a website about slavery with his former students.

“He is a part of many influential changes that have happened at the university," White said. "That really inspired me as an ambassador to see how can I use my work or my platform and things that I love to do in order to implement change, or just even make others aware of what has happened in the past, specifically for African American history.”

Weyeneth said he believes White’s project is an important step for the university.

“The layers of African American history at USC have been largely ignored," he said, "and she has now made them visible if her walking tour becomes part of the Visitor Center’s tours.”

White is a part of the Revision 2020 student committee with President Bob Caslen and Vice President of Diversity, Equity and Inclusion Julian Williams. She said she plans to bring up her project in their meetings.

White said “it’s important to know your history in order to advocate for change and progress towards a better future.”

“You have to know what has been done in the past in order to learn from mistakes and learn from what has worked,” White said. “I see that oftentimes, especially being at a predominantly white institution, we highlight the history of white individuals and white people, but oftentimes not know much about the African American history that makes the university what it is today.”