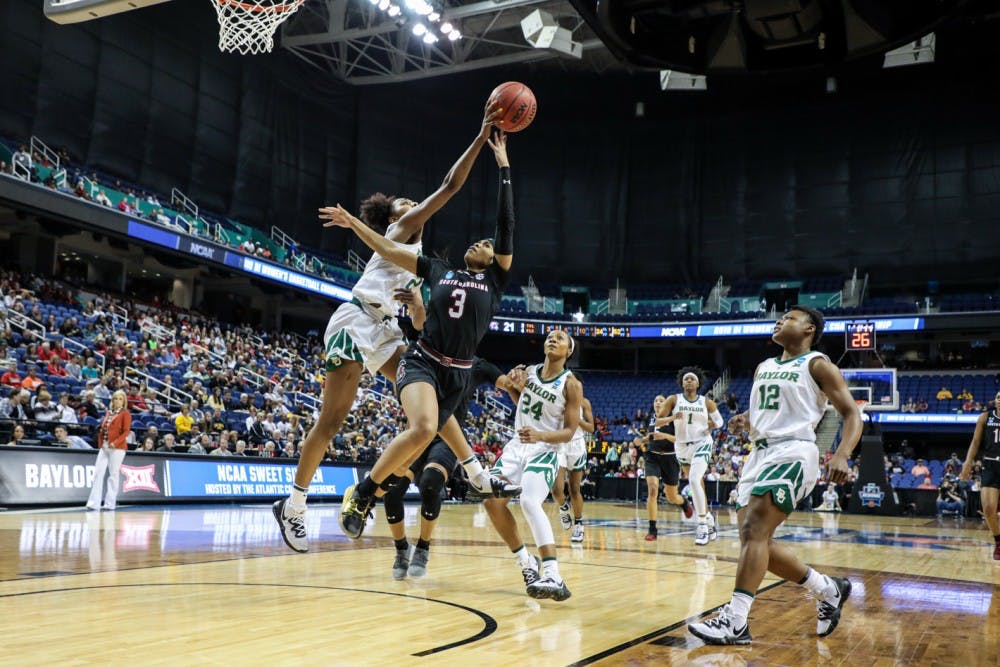 South Carolina women's basketball reached the Sweet 16 for its sixth-straight year, but for the first time since 2016, were eliminated from the NCAA tournament in the regional semifinals.

Despite playing in front of a pro-Gamecock crowd, South Carolina lost to Baylor by a score of 93-68 in Greensboro, North Carolina behind a slow offensive performance.

The Gamecocks were only 21 for 63 from the field and four for 19 in 3-point shots. South Carolina also committed 11 turnovers.

Facing the No. 1 seed Baylor Bears for the second time this season, head coach Dawn Staley said she was disappointed in how the Gamecocks were unable to control the game early, allowing the Bears to assert their dominance from tipoff.

“I just thought we were a step behind,” Staley said after the game. “I didn’t think we dictated defensively where we wanted that ball to go. We had stretches where there were lapses in executing what we wanted.”

However, despite being down 49-23 at halftime, the Gamecocks were able to fight back and cut the Baylor lead to 17 points in the third quarter of the game, something that Staley said she was glad to see from her players.

“At halftime we just kind of thought about our team,” Staley said. “I thought the game settled down after halftime. Unfortunately, we dug a hole that was too big for us to get out of.”

Despite ending the season earlier than anticipated, players said they do not see this season as a disappointment.

“We had a lot of short comings, but I think that we made progress as the season went on,” junior guard Tyasha Harris said. “We overcame adversity. We jelled together. I think we did a lot of things that people didn’t think we could possibly do without A’ja [Wilson].”

The Gamecocks said they are also looking to learn from their experience in the Sweet 16 and look to the future, especially now having No. 1 recruiting class in the nation.

“I’m super excited,” Harris said. “I actually watched their McDonald’s All-American game. I think they will fit in great. They have a lot of aspects and different characteristics that they can bring to the table.”

Looking to the future as well, Staley said she believes that there will be a lot of returning seniors in the 2019-20 season in addition to the top-ranked recruiting class.

“I anticipate having everybody back,” Staley said. “If we don’t, we’ll actually have to go into that [transfer] portal and start looking at players.”

With the 25-point loss, the Gamecocks end the 2018-19 women’s basketball season with a 23-10 record and their eighth-straight NCAA tournament appearance.