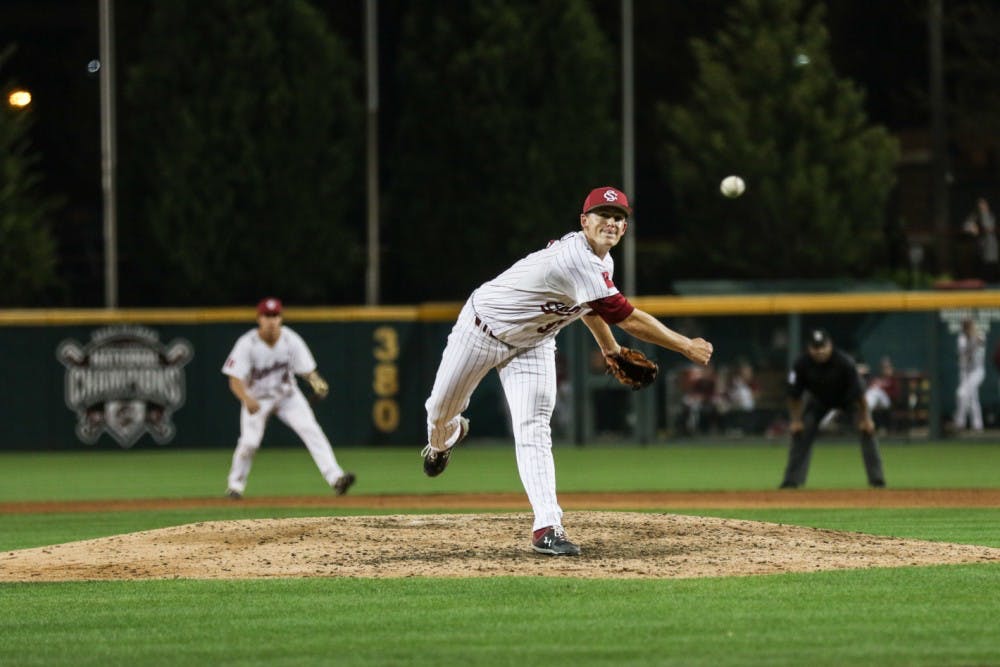 Gamecock baseball lost to the No. 15 Auburn Tigers 4-2 on Friday after heading into the weekend series with offensive struggles, ranking towards the bottom of the SEC in team average, hits and runs scored.

In South Carolina's Friday night series opener, head coach Mark Kingston decided it was time for a change – both in the lineup and the rotation.

Kingston opted to put the ball in freshman pitcher Daniel Lloyd’s hand for the Friday night start. Lloyd got off to a hot start, striking out the first three Auburn batters he saw with a fastball that consistently reached mid-90’s on the radar.

Things turned quickly for Lloyd in the second. Auburn scored three runs off of the freshman, each coming via RBI singles.

After the rough inning, Lloyd settled back in and didn’t allow another run as he pitched through the fifth inning. Lloyd minimized the damage, as the Tigers left seven runners on base.

"He had good stuff tonight," said Kingston of his starting pitcher. "He had good poise, only walked two guys and had eight strikeouts on a Friday night in the SEC. That's everything you could ask for."

For the majority of the game, the Gamecocks’ offense appeared to be headed for another slow showing.

Coming into Friday’s matchup, Auburn ace Tanner Burns owned a 3-0 record with a 1.41 ERA and 52 strikeouts. The Tigers’ starter dominated the Gamecocks early, recording seven strikeouts through his first six innings of work. The offense hit Burns in the sixth inning.

Despite the recent struggles, one thing the Gamecocks have done all season is hit home runs, which they also did on Friday.

After TJ Hopkins reached first on an error, Noah Campbell, who had an extra-base hit robbed from him earlier, took Burns deep to right for a two-run shot in the bottom of the sixth inning. It was Campbell’s third home run of the season, cutting the Gamecock’s deficit to just one run.

Both bullpens slowed the scoring, until Auburn tacked on another run to its lead in the top of the ninth off South Carolina pitcher Wesley Sweatt.

Trailing 4-2, the Gamecocks' offense stranded runners on base in both the eighth and ninth innings, as Auburn's bullpen shut the door on any chance of a comeback. Runners left on base became the story of the loss, as the Gamecocks were unable to bring six of their baserunners across to score.

"They competed, they made adjustments offensively that we demanded of them, and we saw better, more competitive at-bats," Kingston said. "But we want to win, period."

The Gamecocks and Tigers will play game two of the series Saturday afternoon. Reid Morgan is scheduled to face Brooks Fuller with first pitch at 1 p.m.