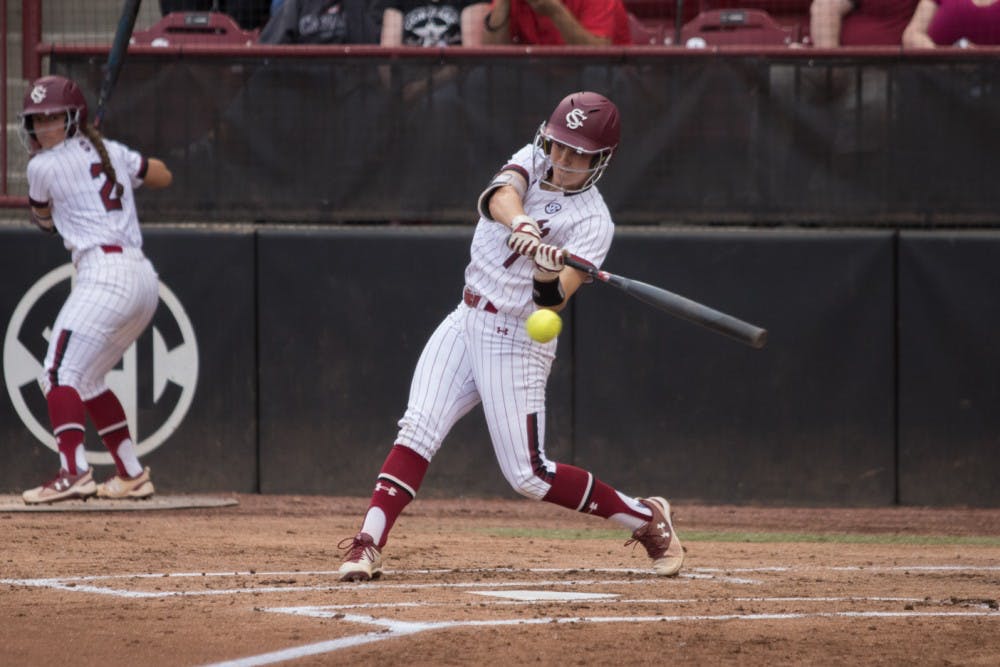 Gamecock softball falls to No. 15 Bulldogs in extras

This drought ended in the third inning where Raley pitched two wild pitches to advance Georgia sophomore outfielder Tyler Armistead to third and then home to put the Bulldogs on the board first.

The score remained at 1-0 until the sixth inning, where the Bulldogs' junior outfielder Alysen Febrey sent a solo shot to center field to extend the Bulldogs lead to 2-0.

The Bulldogs elected to take out Cutting and put in pitcher Kylie Bass after two Gamecocks got on with no outs in the sixth. The Bulldogs' senior left-hander hit sophomore Alyssa Kumiyama to load the bases up for South Carolina with no outs.

“I just told myself just do what you do,” Drotar said. “Don’t try to be big here, just relax, see the ball, hit ball, and that’s what I did.”

The Gamecocks were three outs away from winning the series going into the seventh, but the Bulldogs responded.

After Georgia junior outfielder Ciara Bryan hit a leadoff single to put a runner on for the Bulldogs, senior infielder Alyssa DiCarlo hit a two-run homer just over the center field wall to tie the ballgame up at four runs apiece.

The Gamecocks were then given another opportunity to secure the series over the Bulldogs as they had runners on second and third with two outs, but sophomore infielder Katie Prebble grounded out to third base to send the game to extras.

After a double, Bryan homered to center field to give the Bulldogs the 6-4 lead and would eventually give them the win as the Gamecocks were unable to get anything going in the bottom frame.

“We tried to just stay within ourself and control what we could control, and I think we did a pretty good job of that.” sophomore infielder Jana Johns said. “We fought the whole way and it just didn’t turn out in our favor today, but we’re going to get them tomorrow.”

The Gamecocks will play the last game in the series against Georgia tomorrow at Beckham Field. First pitch is set for 3 p.m. and can be seen on ESPN2.