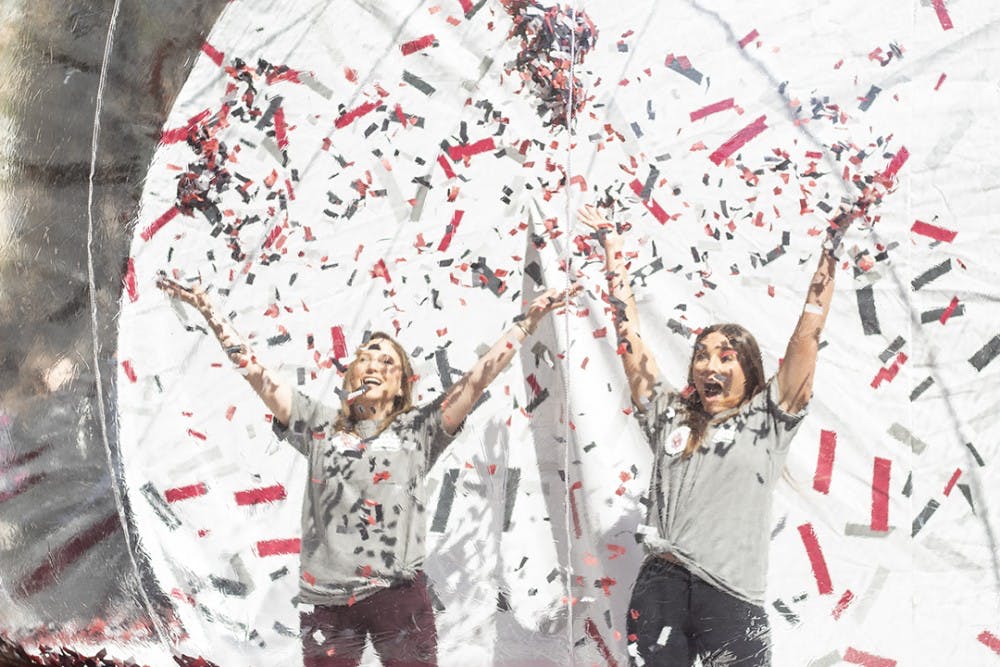 The University of South Carolina’s second annual Give 4 Garnet day resulted in more than $4 million in gifts from 6,576 donors on April 10. The event exceeded its goal of 6,500 donors in 18 hours and one minute.

“What a great experience it was," USC President Harris Pastides said. "We will never forget it. We are in your debt."

For Elizabeth Muth, who was volunteering through the alumni association, Give 4 Garnet is not so much about how much people are able to donate. What is more important, she said, is getting into the habit of contributing something.

“This is a great opportunity for students to start the practice of giving,” Muth said. “It’s just a little bit. It’s not about the dollar figure.”

The event placed an emphasis on trying to make it easy for students to contribute, while also being mindful of their financial limitations as college students.

“We are just really trying to encourage students to participate today. We really want Gamecocks to be able to give back to one another,” said Sara Shealy, the assistant director of development for student affairs, “By allowing them to give to the Gamecock Pantry or the Carolina Closet, we’re not asking for financial donations, but just a way to support one another.”

Raegan Brizek, a second-year broadcast journalism student and Carolina Productions president, said it's important to encourage Gamecocks from all over the country to participate in a day of giving back.

“It kind of reminds everyone to give thanks. Our community does so much for us, and we want to help them in return,” Brizek said

Jade Morton, a third-year political science and supply chain student, said she thought Give 4 Garnet was a great initiative and she wanted to contribute. However, Morton added that she felt like Give 4 Garnet placed too much emphasis on student donations this year, citing multiple emails she and her friends have received asking for contributions.

"I know that it made me upset," Morton said. "I felt like I couldn't give back, and I felt guilty. But I just knew that I couldn't afford that financially."

Morton suggested that Give 4 Garnet could improve in the future by looking to their alumni more and students less when it comes to financial donations.

Money raised by Give 4 Garnet goes to university projects from scholarships to building renovations. Because of this, fourth-year biochemistry student Gretchen Bollar considers Give 4 Garnet beneficial to students.

Give 4 Garnet’s main event, an outside street fair, took place on Greene Street from 10 a.m. to 2 p.m. While the majority of the day's donations were made online, more than 300 people made cash donations at the fair.

Hannah Leach, a first-year marketing student, enjoyed seeing where the money was going and that each contribution supported a specific campaign.

The Give 4 Garnet website had 22 projects and campaigns for donors to choose from.

“You can kind of designate where you want your money to go to,” first lady Patricia Moore-Pastides said.

At the end of the day, Student Affairs and Academic Support received the highest number of gifts, while Pastides Initiative for the Alumni Center received the most donations.

Give 4 Garnet also met several goals during the event, including a challenge to get donations from all 50 states. Athletics and the College of Education were rewarded a $7,500 prize for securing the last two states in the "fill-the-map challenge," Montana and Vermont.

“I think it’s really important for Gamecocks to see the Carolina community come together to support one another,” said Shealy. “And I think it’s a really fun day to celebrate being a Gamecock.”

Between Cocky wandering around the fair on Greene Street and appearances by President Harris Pastides and first lady Patricia Moore-Pastides, the event certainly felt like a celebration of the university to many.

“Well, it’s just fun to be out here with you all,” Moore-Pastides said. “I love it. It’s like a festival. And it’s just a lot of fun.”