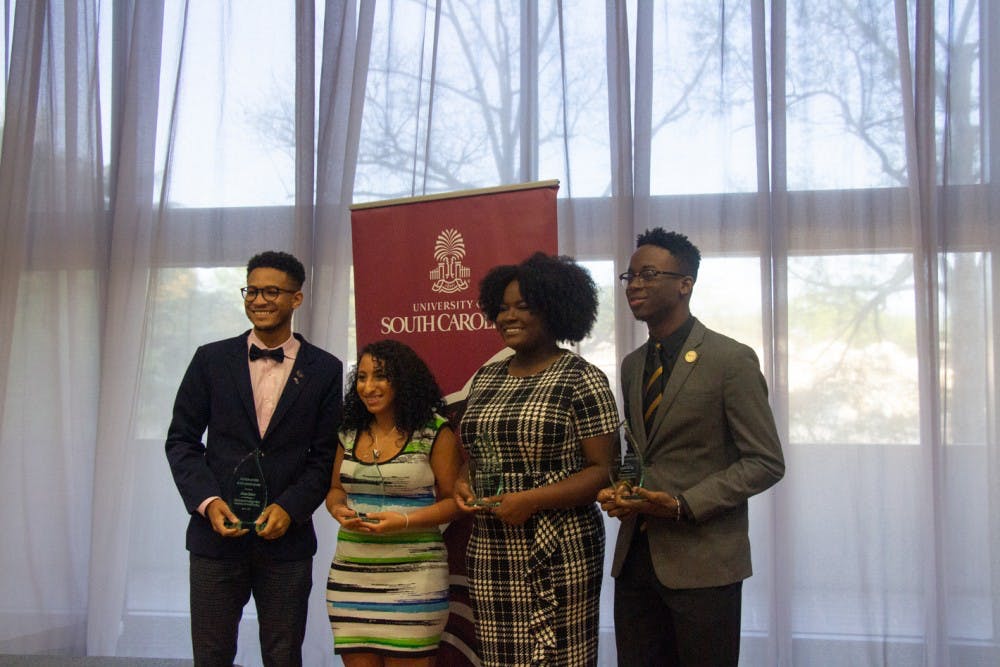 The Office of Multicultural Student Affairs (OMSA) hosted the Celebration of Excellence on Wednesday in the Russell House Ballroom to acknowledge students on campus who are actively creating a diverse community and promoting social justice at USC.

Five awards were given out during the Celebration of Excellence. Each of the individuals have good academic records and are actively involved in advocating for diversity and social justice on USC’s campus.

Dawes discussed USC’s past, focusing on the lack of equity for African American and minority students. In the 1970s, Dawes said hundreds of African American students enrolled at the university, whether undergraduate, graduate, or law school students, shared Willy Harrison as their sole advisor. Dawes said Harrison was even given a placard that read "colored dean."

Since then, Dawes said USC has changed for the better. He closed his speech by expressing his pride for those in attendance and emphasizing the importance of helping others.

"You will lead the next generation. If [DuBois] were here tonight, he would say "Don't be good, be great.'" Dawes said. "He would say reach back and help someone else, and say remember someone saw something in you and reached back to grab your hand."

After Dawes spoke, the recipients of each award were named.

The Jackson-Rivers Scholarship for $250 was awarded to Aidan Baker, a first-year business student. The scholarship is named after Walter Jackson, former director of OMSA, and Thomas Rivers, former coordinator of OMSA.

“I think this person is incredibly strong, incredibly bright, incredibly diligent and has done so much despite everything she’s been through and despite the odds being against her,” Wright said.

Swinton became the first secretary of inclusion and equity in Student Government and previously received the USC Martin Luther King Jr. Social Justice Award for combatting social injustice on campus. She also spoke about her experience as a female first-generation African American student at TEDx USC. She said she enjoys the leadership, community building and mentoring experience she gained along the way.

“I would say just start. A lot of times you can get wrapped up in your head, all the things you want to do, but taking any step is the best first step,” Swinton said. “Once you do it, make sure it’s something that you love and you’re passionate about, and if you let your heart lead the way, then you’re going to always do a great job.”

Youstina Rezkalla, a fourth-year social work student, received the Changing the Face of USC Diversity Award, which is presented to an individual who has worked towards creating an awareness of cultural and diversity issues on campus and the community. Sonya Singleton, assistant dean for the College of Social Work, has worked with Rezkalla in the past and presented the award.

“She is fearless," Singleton said. "She will take that same tenacity and spirit and she goes out and continues her work in the community at large. I have no doubt about that."

Rezkalla chartered Colligate Curls, a natural hair organization that promotes and supports multicultural students, visits local high schools to talk about self-love and self-care and organizes annual canned food drives for Title I schools. She said her work allows her to give others a voice.

“I’m going to be fearless," Rezkalla said. "I’m going to speak on it, I’m going to make that change, because someone has to be that voice.”