Column: Improvement on the hardwood starts with in-state recruiting 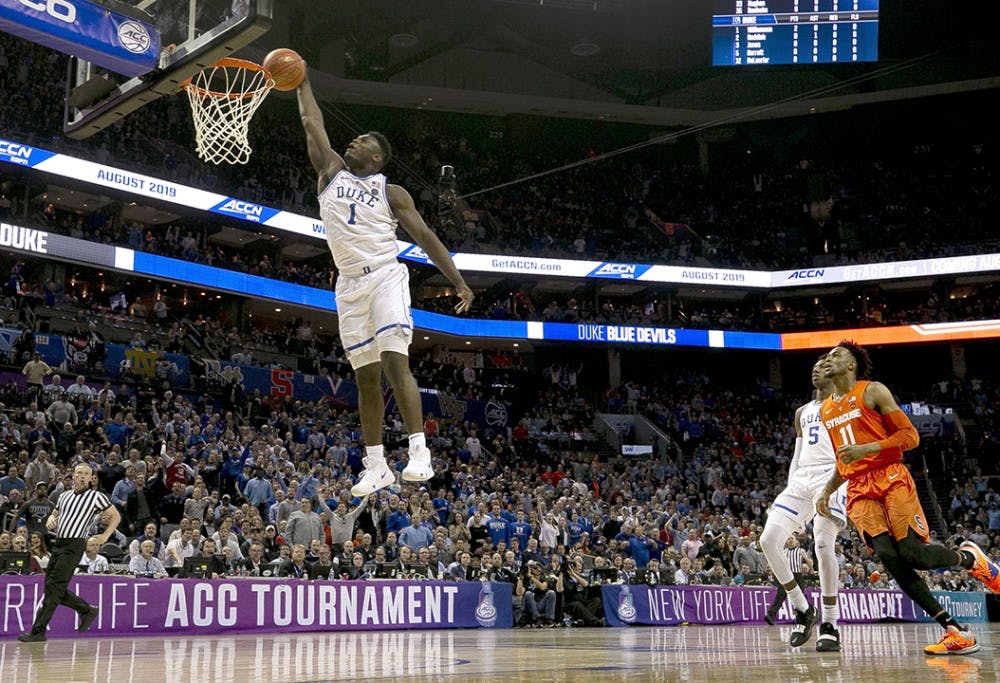 Zion Williamson of Spartanburg, South Carolina is one of the most electrifying basketball prospects in recent memory. The 6-foot-7-inch, 285-pound freshman phenom has helped Duke remain a No. 1 seed in this year’s NCAA Tournament, while his emphatic dunks and unmatched athleticism have made him a national star.

In the shadow of Williamson is the lesser known Ja Morant.

Morant does not get the same national attention as Williamson, but his talent is in competition with the best in college hoops. Morant shot himself into the spotlight after an impressive showing in the first round of the tournament. The sophomore guard dropped a triple-double as his Murray State Racers upset Marquette before being eliminated by the Florida State Seminoles in the round of 32.

Apart from both being projected as lottery picks in this year’s NBA draft, the two have something else in common: they share a home state.

Both hail from South Carolina and actually played together on the same Amateur Athletic Union team for one summer. They are the latest — and most glaring — examples of the inability of the Gamecocks to recruit in-state basketball talent.

His aforementioned athleticism turned him into a viral sensation long before he became a member of the Blue Devils, and he was ESPN’s No. 2 overall prospect for the 2018 class. According to South Carolina men's basketball head coach Frank Martin, the Gamecocks were the closest to competing with Duke in the recruiting process right up until Williamson made his decision.

It is understandable that Williamson would be drawn to Duke over South Carolina. Duke is one of the most prolific basketball powerhouses in the sport's history. Duke men's basketball head coach Mike Krzyzewski has had Duke at the top of the basketball world for decades, grooming prospect after prospect into NBA talent. If there's one program that a player dreams of attending, it's Duke's.

The same cannot be said for Morant's recruitment. Morant, native of Dalzell, South Carolina, was also heavily pursued by Martin, though he ended up at mid-major Murray State. Prior to Morant, the program had one All-American player in its history. In 17 total appearances in the NCAA tournament, they have never made it past the round of 32.

To put it lightly, Murray State and Duke basketball are on completely different planes of existence.

As these two stars have proven, the Gamecocks have been unable to close the deal on top in-state recruits. P.J. Dozier, back in 2015, is the only No. 1 in-state prospect to commit to South Carolina during Frank Martin's tenure as head coach.

With another mediocre year resulting in a 16-16 finish and not even an National Invitation Tournament bid, the lack of success could be what keeps these players away. It's tough to compete with a program like Duke when the Gamecocks don't even play postseason basketball, but to lose out to a mid-major program like Murray State is a different story.

Morant's reason for choosing Murray State over South Carolina is simple: he felt at home with the Racers. Murray discussed his commitment to the smaller program in an interview with The Murray State News from 2018.

“Once I came to Murray, I just fell in love with Murray and just felt like it was the best fit for me as a player and a person, really,” said Morant. “I started talking to my parents while I was here, and I just told them I was ready to commit because I thought it was the best place.”

If Martin and the Gamecocks cannot draw in South Carolina recruits without success and they cannot make the program feel like home, what can they do to close the door and get South Carolinians to commit?

One draw could be the Gamecocks' run to the Final Four back in 2017 under Martin.

The 2017 team is the sole, shining example of success on the hardwood for the program. South Carolina was an underdog No. 7 seed and went on to win the school's first tournament game since 1973. The Gamecocks' tournament run was surprising, highlighted by knocking off Williamson's future suitor, Duke, in the round of 32. Martin was credited with most of the team's success that year, as his coaching gave the program national attention for the first time in recent memory.

Martin could also use the Gamecocks' young core as reason to come to the team. With veterans like Chris Silva, Tre Campbell and Hassani Gravett on the way out, the team will be led by exciting young players. A.J. Lawson and Keyshawn Bryant proved themselves as potential stars in their freshman seasons.

The Gamecocks will also feature young talent that missed out on playing last season, such as Jermaine Couisnard and T.J. Moss. Martin could sell commits on the potentially bright future ahead with all of these young pieces in position to be contributors for the foreseeable future.

Of course, Martin could be doing this and so much more to try to lure in big-time South Carolina prospects. As Morant, Williamson and many before them have proven, there is talent to be found in South Carolina.

Unfortunately, most don't end up with Colonial Life Arena as their home court. Martin and the men's basketball program must figure out a way to attract these local stars. If they can't, Gamecock fans could find themselves thinking, "What if?" just as they had to this past season.