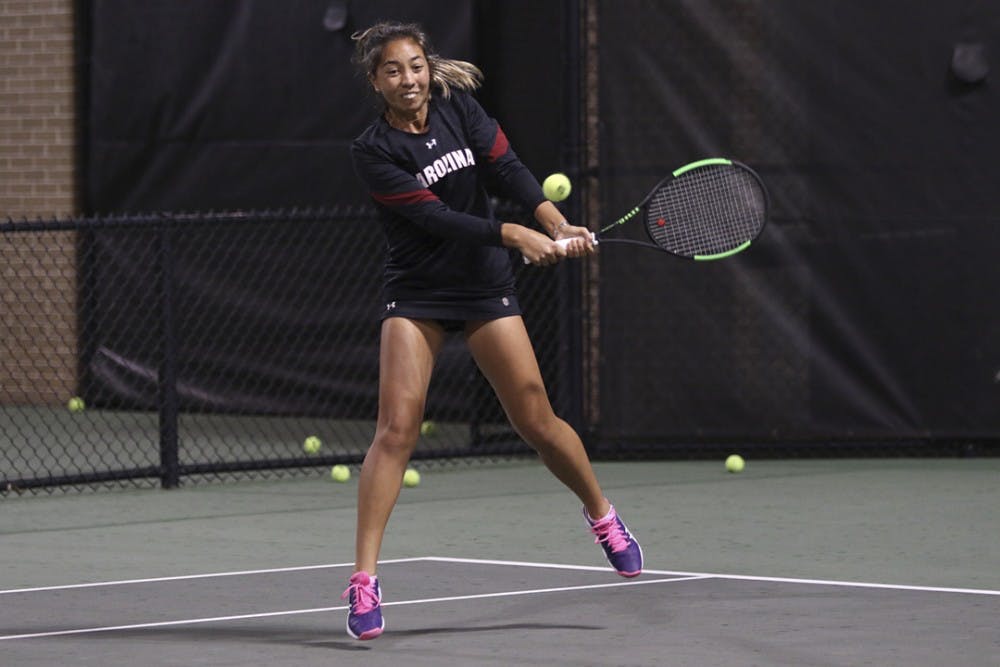 After securing its first ever SEC championship, the Gamecock women’s tennis team is now focused on NCAA play.

“We're gonna obviously enjoy this for a couple days,” head coach Kevin Epley said. “We've got to get back to work. It’s an incredible thing what they did last weekend, and fighting like that, it took a lot of energy out of us, but we've got our eye on a bigger prize.”

Senior Ingrid Martins notched the 4-3 win over No. 1 Georgia, winning two of three sets (6-1, 4-6, 6-4) to clinch the match. Martins said she experiences many emotions as she laid on the floor exhausted after her teammates embraced her.

“I wanted to do that for the team,” Martins said. “I just was thinking, 'Play for your heart, with your heart. And just do what you know.'”

For a moment, Epley said that Martins abandoned her game, but she got it back.

Senior Paige Cline said that it has been amazing to see Martins reach her potential and that coming into freshman year, the Gamecocks knew what she was capable of.

“We know that she has a lot more to go," Cline said. "Everyone on the team is really in the mindset of just doing their job."

Along with the South Carolina team, junior Mia Horvit said that the moment leading up to Martins securing the win was "nerve-wracking." However, according to Martin, this win wasn’t the first time when things clicked for South Carolina.

Martins said that since NCAA is the three seniors' last chance to play for a time, they are motivated to move forward. This group of seniors has been to the Sweet 16 three times and claimed new records.

“I think senior year it's been really great to kind of see all the things we've been building for the past three years kinda come to fruition," Cline said. "It’s definitely something that I know the seniors and the rest of the team is really proud of.”

Cline reached her highest career ranking of No. 23 for this season and Martins remains at No. 4. In addition, Horvit claims No. 84.

“I think just looking at the bigger picture, it's nice to get this accolade,” Horvit said. “It's not over yet. We're still hungry to get this national championship.”

Epley said that winning the NCAA tournament is a goal, but it is in the background.

“Our whole philosophy all year has been match by match, just bringing the same level of competitive spirit to each of these matches," Epley said. "Take them one at a time, and everything will unfold.”

The Gamecocks will get back to work and practice this Friday. The NCAA selection show will air April 29 at 6:30 p.m.