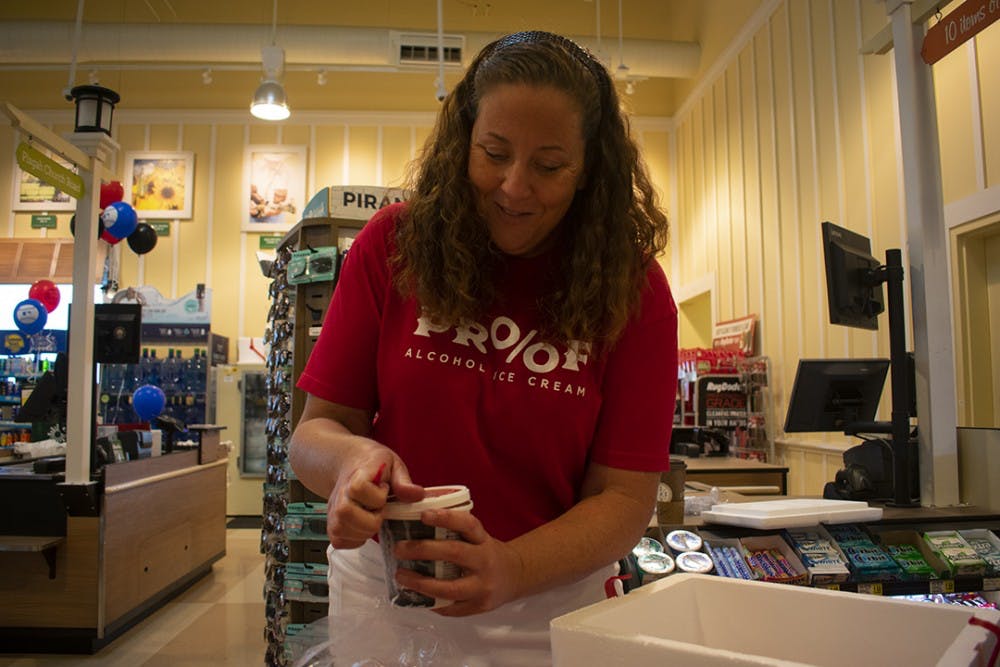 In the early '90s, Jennifer Randall-Collins found a sense of belonging on the basketball court alongside the USC women’s basketball team. Today, she’s a member of a different kind of team, one where she’s captain.

Randall-Collins is the co-founder and CEO at Liquorem Holdings, and her company creates PROOF (stylized as Pr%f) alcohol ice cream. PROOF combines what Randall-Collins considers two of life's greatest indulgences.

"We have two highly regulated regulated areas in the food industry, one being the dairy industry and one being the alcohol industry, and we have found a solution to combine those two industries with this product," Randall-Collins said.

Randall-Collins was raised in Kentucky and said her family grew up "pretty poor." If it weren't for a basketball scholarship from USC, she might not have even gotten the chance to further her education at all.

While she'd rather forget about running laps up and down the Bull Street hill, she fondly remembers the surrogate family she found in the team during a difficult time in her life.

"My mom died unexpectedly my freshman year in college of pancreatic cancer," Randall-Collins said. "And if I didn't have my coaches and my teammates to surround me and lift me up, and the whole athletic department, I don't know that I'd be sitting here with this opportunity today."

After graduating with a business degree in 1995, Randall-Collins returned to Kentucky where she got married, had children and became a stay at home mom who worked from home. However, after meeting an individual who was trying to commercialize an old family recipe, she decided to chase a dream she never knew she had.

"I ended up becoming involved because I thought the product was pretty decent," Randall-Collins said. "And then I also thought there was an opportunity to build strategic intellectual property around the product, so I'd kind of jumped in with both feet quite frankly."

For Randall-Collins, not only was this a chance to harness an innovative idea, but it was a chance to invest in a business that would pay dividends for her family down the road.

While doing some research, the next step for her and her business partner was to find a state where regulatory laws would be friendly towards a product that combined alcohol and ice cream.

And what state would just so happen be on the list but South Carolina?

Thus, Randall-Collins moved back to Columbia with her family where she launched the first iteration of PROOF in 2015. The result is an unconventional ice cream hybrid that contains 7% alcohol content and comes in year-round flavors, such as strawberry moonshine, and seasonal options, such as coconut rum.

Randall-Collin’s personal favorite flavor is the one that reminds her of home.

"It's definitely the bourbon caramel. I love it because I'm a Kentucky girl," she said.

Although she couldn’t reveal any of the secret recipe, she likens the finished product to "magic" and says it stems from much more than the ice cream's ingredients.

"When I say it's a little bit of magic, I'm not talking about the magic of the ingredients, it's just how we combine those."

This year, Randall-Collins and one of her business partners bought out the company from prior investors and rebranded the ice cream from JB’s PROOF to PROOF. The ice cream also expanded from local stores like Green's Beverages on Assembly Street to grocery stores like Lowes Foods. Even the colors on the new carton pay homage to her alma mater.

In addition to the success of her business, Randall-Collins says one of the most rewarding parts of owning her own business is watching her employees succeed too, especially since many of them made sacrifices to help her chase her dream.

“They just they laid on the line for this company everyday,” she said.

Randall-Collins said she considers herself a "big believer in taking care of the people that execute everyday for you on the ground" which is why she incentivizes her employees on the ground and works hard to foster a tight-knit community.

"That's probably why I love it so much, because it ties back to team environment of basketball," she said.

Consequently, she credits her years as a basketball player for preparing her for this journey just as much as she does her business classes.

“No way I would be doing what I am doing today without my experience as a student-athlete at USC,” Randall-Collins said. “It absolutely provided a core foundation for me to build on, not just as a young adult, but as an entrepreneur in her mid-40s that's starting over again and loving every second of it.”

For aspiring business students at Carolina, Randall-Collins says there’s not a better time than now to pursue a business degree at USC and urges Darla Moore students to take advantage of their resources.

“I think the culture for that right now is hot, the willingness of the faculty and the entire ecosystem of USC to support that could not be better,” Randall-Collins said.

While PROOF has come a long way in just a few years and is steadily gaining momentum across the state, Randall-Collins says success is measured by more than just monetary gain.

"Everybody thinks there's a destination point for success, and there's really not. Success is a journey we're all on," Randall-Collins said. "Define it for who you surround yourself with, how you grow your business, what your values are as a company and as an individual, and stay true to those."