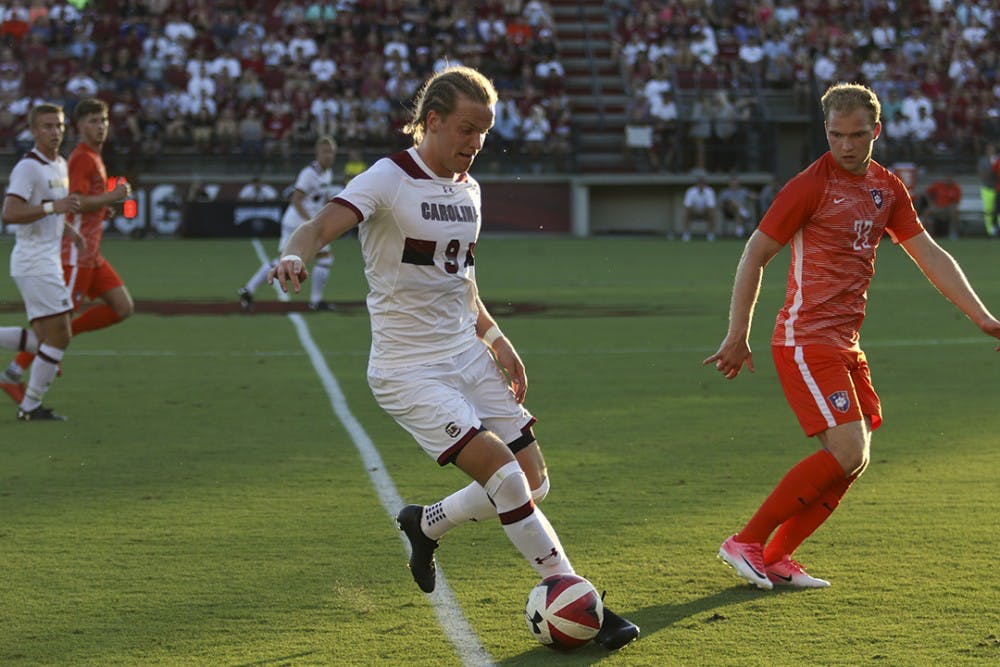 Going into their 42nd season, the Gamecocks are focusing on reinventing themselves.

Head coach Mark Berson, the winningest active coach in the country, and the rest of the soccer team are looking to start the season on a good note this Friday as South Carolina takes on the Clemson Tigers in the first match of the regular season.

The team's last matchup with Clemson was almost exactly a year ago at Stone Stadium in Columbia. The match ended in a 2-0 loss for the Gamecocks.

Overall, South Carolina has won seven matchups against the Tigers, while Clemson has won 13. The last time the Gamecocks defeated the Tigers was at home on Sept. 2, 2014, winning the game 2-1.

Since October of 1978, the Gamecocks have scored a total of 21 goals against the Tigers.

In their last 10 matchups with the Tigers, the Gamecocks have a 3-7 record. For their overall record against Clemson, South Carolina is 5-6 at home, but 2-7 away.

Brian Banahan: Banahan, a freshman from Lexington, Kentucky, was a four year starter in high school and scored 55 goals in his varsity career.

In his first exhibition match at South Carolina, Banahan scored two goals in the second half of a game versus the Duke Blue Devils. Four days later, he scored two more goals in a match against the Wofford Terriers.

Assistant coach Justin Cook said he was impressed with Banahan's play against the Blue Devils.

"That's great. Especially with a young guy, to get off the mark and score a goal. Not just one, but two; and the second one was pure class," Cook told Gamecocks Online.

Tucker Monheimer: Monheimer, a senior from Louisville, Kentucky, has had a successful three years in collegiate soccer. He started in 16 games during his freshman year at Northern Kentucky and played in 12 games in his first year at South Carolina in 2017.

Last year, Monheimer started in all 17 matches for the Gamecocks and finished tied for second on the team in scoring with nine points. He has also been appointed to the SEC Academic Honor Roll each year he has been at South Carolina.

Luca Mayr: Mayr, a senior from Steyr, Austria, has been a standout player thus far in his time at South Carolina. He has started in every game he has played with the Gamecocks.

Mayr led the Gamecocks in points for two consecutive years (2017 and 2018). He has been awarded spots on several all-conference teams and has been on the SEC Academic Honor Roll for three years.

So far, the men's soccer team has had an interesting start to their season.

The Gamecocks have played three exhibition matches and each game had completely different results: one 2-2 tie against Duke, one 7-1 win against Wofford and one 2-0 loss to UNC Wilmington.

This should have fans curious about how the season will turn out.

Duke is currently ranked No. 10 in collegiate soccer, making South Carolina's tie game with the Blue Devils more impressive than some might think.

Although the Gamecocks suffered a loss to UNCW, these exhibition matches played a key role in preparing the team for the regular season.

South Carolina will play Clemson on Friday at Riggs Field. The match is set to begin at 7 p.m.