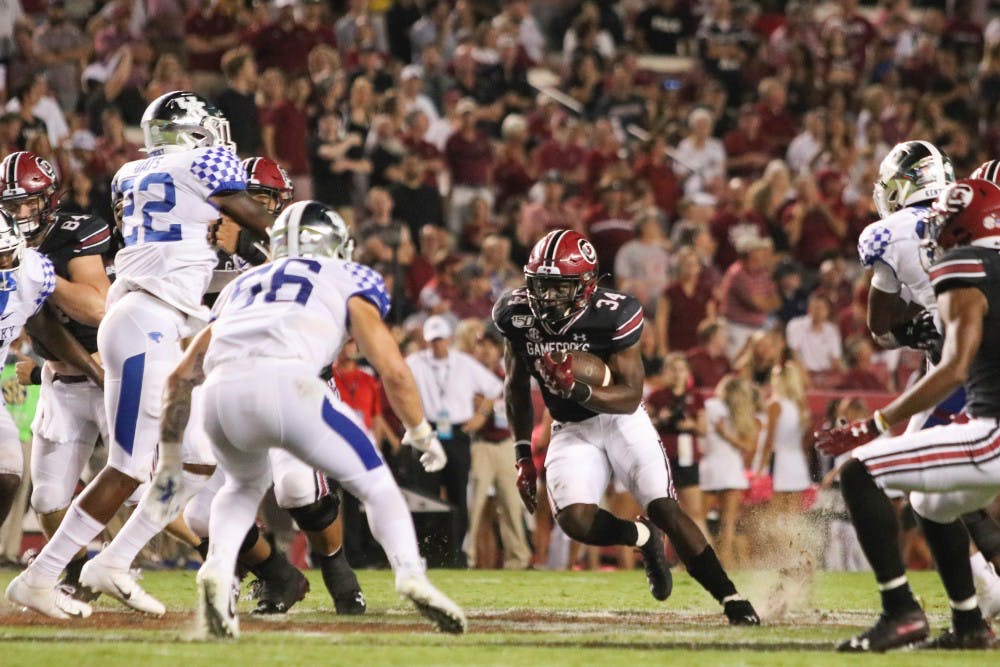 The Gamecocks entered their fifth game of the year still looking to secure the team's first win against an FBS opponent and end their five-year losing streak against the Wildcats.

South Carolina accomplished both these feats, powered by the defense. Head coach Will Muschamp said they were able to be so successful by "win(ning) on the line of scrimmage."

The secondary came through by virtually shutting down junior Wildcat quarterback Sawyer Smith, holding him to only 90 passing yards and an interception.

The defensive line was also able to put pressure on Smith quickly, especially senior defensive end DJ Wonnum who ended the night with a career high three sacks. Wonnum credited the defense's ability to stop the run for giving him the opportunity to go after the quarterback and come away with a career high in sacks.

Kentucky's ground game was not able to gain much traction.

The Gamecocks rushed for 247 yards throughout the game. Senior running backs Rico Dowdle and Tavien Feaster both finished the night with over 100 yards on the ground.

Feaster lauded the offensive line, saying that their performance was "amazing" and that this let the offense "impose (their) will" on the defense.

Freshman quarterback Ryan Hilinski had a solid outing, albeit he did not post flashy numbers. He threw for 140 yards without a touchdown, but protected the ball and managed the game well.

Muschamp stressed the significance of this win, especially considering the 1-3 start, saying "we needed to get a win, and we got one."

Senior offensive tackle Donnell Stanley echoed that sentiment saying the team was "desperate" for a win.

The Gamecocks started out the contest fast, taking the inaugural drive of the game 75 yards. This culminated in a two-yard touchdown run for Feaster.

Kentucky did not have the same success on their first drive, as linebacker Ernest Jones picked off a lobbed pass by Smith to give the Gamecocks back the football.

The game never seemed in doubt after that, with the defense putting on a dominant performance to shut the Wildcats out until the last few minutes of the fourth quarter.

The Gamecocks came out of the half quick as well. Wonnum forced a fumble via a strip sack,  and then Dowdle took the Gamecocks' first offensive snap of the second half 30 yards to the end zone.

In last week's matchup against Missouri, Dowdle's performance was less than stellar, only able to account for 17 rushing yards. Fortunately for the Gamecocks, that did not stop him from producing this game.

Dowdle rushed for 102 yards on 15 attempts, including the 30-yard touchdown he ran for coming out of halftime.

The Gamecocks may have to look for rushing production elsewhere for the remainder of the season, as Dowdle did not see the field after having to be helped off with an apparent left leg injury.

Dowdle said after that game he was "feeling alright" and was optimistic, but Coach Muschamp still remains cautious saying he will "know more as  we move forward."

Feaster seems the most likely candidate to see a boost in reps should Dowdle miss time. He ran for 107 yards and two touchdowns. Mon Denson should receive more touches as well.

The South Carolina Gamecocks travel to Athens, Georgia for an away matchup against Jake Fromm and the third-ranked Georgia Bulldogs after a week off. The Gamecocks will look for a better showing against this SEC East after getting blown out 41-17 at home last season.

Television listings and the kickoff time for the contest will be officially announced on Sunday.