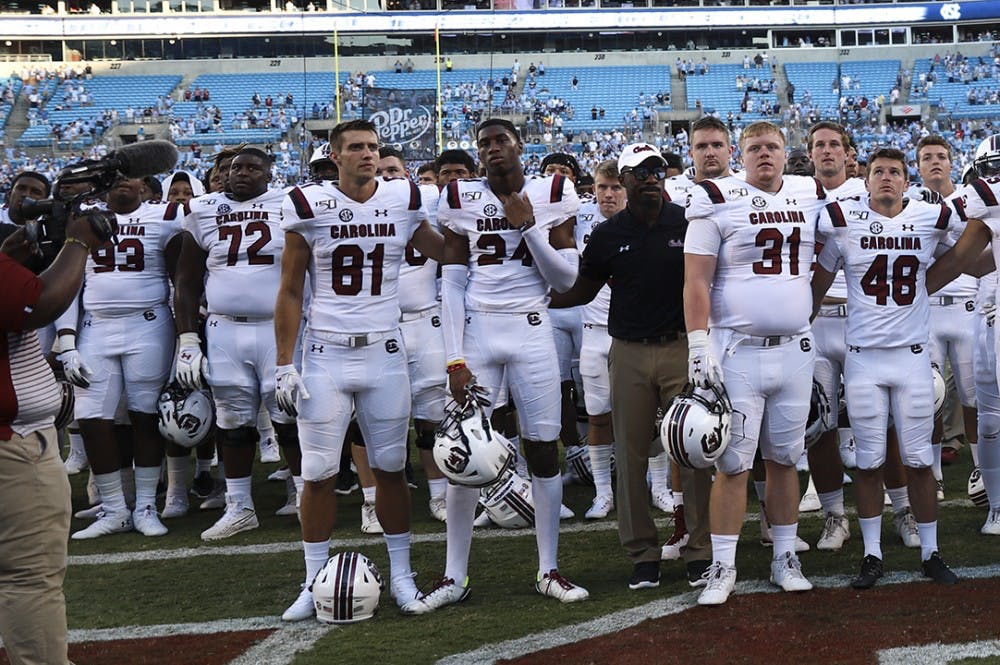 The quarterback depth chart for the Gamecocks' 2019 football season features Jake Bentley returning as the starter for his senior season, as expected.

Where the real competition festered was among freshmen quarterbacks Ryan Hilinski and Dakereon Joyner for the back-up job. After much deliberation throughout the offseason, Hilinski was pegged by head coach Will Muschamp as the back-up with Joyner taking the third spot.

With the three spots decided, one player was left as the odd man of the group — sophomore Jay Urich. Urich has not seen the field much since joining the team two years ago, and his chances to make it as a quarterback are slim to none with the arrival of Hilinski and Joyner.

It would come off as an easy decision to many if Urich were to give up on playing football at South Carolina. However, Urich is conveying his dedication and commitment to the team by giving whatever it takes to make an impact for the Gamecocks — even if it's at an entirely different position.

Urich joined the Gamecocks in 2017 as a three-star, pro-style quarterback recruit. In his two years since joining the team, Urich has thrown — and completed — just one pass in his career. With the three quarterbacks solidified ahead of him on the depth chart, Urich has begun a transition to wide receiver as he tries a new approach to seeing more time on the field.

Urich's position change first came about towards the end of last season, when he saw the field as a special teams contributor. Now, Urich hopes to make more of an impact as a member of the receiving corps with a full offseason under his belt away from quarterback.

Beginning as a special teams contributor, he began to garner real attention as a receiver after this year's spring game. A member of the "Black Team," Urich led the exhibition in receiving yards.

Urich hauled in nine passes for 130 yards, the highlight of which was a 62-yard sprint to the end zone off of a screen pass from Joyner. Urich, who stands at 6'5" and 210 pounds, showcased the size and athleticism that helped him rush for 1,000 yards twice as a high school quarterback.

While he has shown his ability to contribute as a receiver, Urich will have plenty of competition at his new position. With now seven receivers on the depth chart, Urich will have to find a spot towards the end of the rotation. Seniors Bryan Edwards and Chavis Dawkins and junior Shi Smith are locked in as Bentley's top three targets heading into the season.

Where Urich could make an impact is filling out the depth of the rotation. Offensive coordinator Bryan McClendon spoke of this possibility with The State earlier this month.

“I mean, we’re probably gonna need that guy to be in the rotation ... he’s a guy that we feel like this that’s going to be able to give us some good depth, good quality depth that position.”

After last season, the Gamecocks could afford to add some depth at the position. Bentley will be without his former favorite target, Deebo Samuel, who was drafted by the San Fransisco 49ers in April. No Gamecock receiver had over 200 receiving yards last season outside of Samuel, Edwards and Smith.

For now, it is unclear whether Urich will see much action this season. In the season opener against UNC, Urich did not see the field. With seven receivers on the roster, there will be plenty of shuffling amongst the bottom of the rotation. What is clear, however, is Urich's drive and commitment to playing Gamecock football. The reinvented player is ready to make an impact as a wide receiver in 2019.