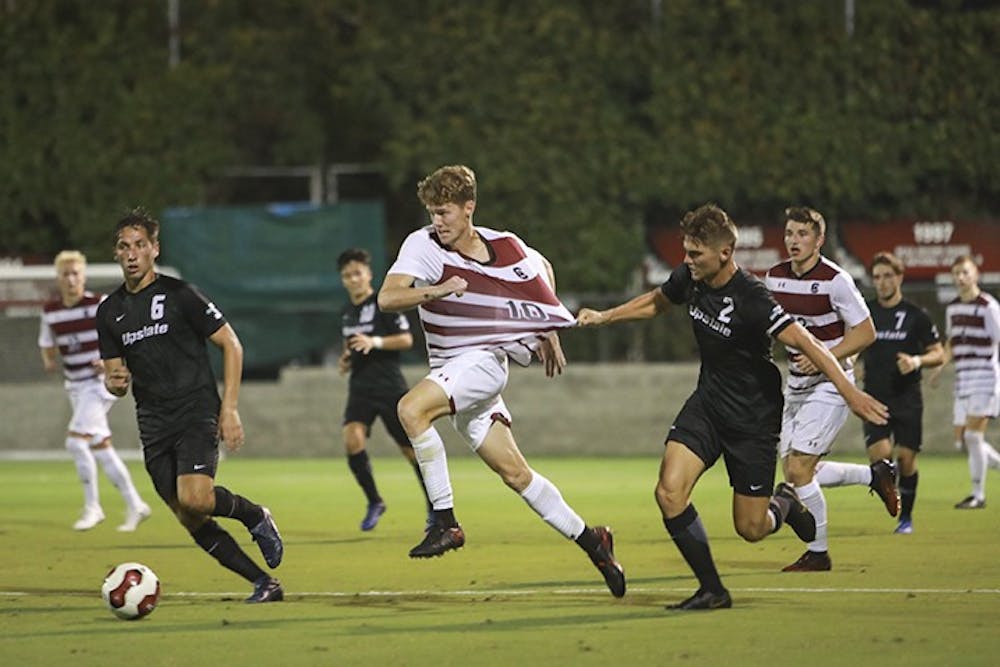 The South Carolina men’s soccer team (2-1) picked up its second win of the season with a 1-0 victory over the USC Upstate Spartans on Friday night at Stone Stadium.

The match started off as an offensive standstill in the first half, as both squads were only able to put up one shot a piece on the scoreboard in the first 12 minutes of the match.

The offensive firepower of the Spartans (0-2) amped up a little later on in the half, as Upstate out shot South Carolina 5-4 in the remainder of the first half and controlled possession of the ball for 59% of the first half.

However, neither team could get a shot past the opposing goalkeeper, making the score 0-0 heading into the locker room.

Though the Spartans controlled the match in the first half, the story was a bit different in the second.

“We just couldn’t break them down [in the first half], and at the same time, they were kind of dangerous on the break," head coach Mark Berson said. "What you have to do in that case is be calm, do what you do and come out and solve the problem and I thought our guys did in the second half.”

After the intermission, the Gamecocks were able to take control of the match and out shoot Upstate 8-1 in the second half while giving the Spartans no corner kick opportunities, as opposed to South Carolina’s three.

Nevertheless, the Gamecocks were unable to get one past goalkeeper Luca Bulfon: The Spartan freshman came up with three saves in the second half alone to bring Friday night’s match into extra time.

“I just immediately turned and started crashing the keeper,” Banahan said regarding his game-winning goal. “Because he let a couple balls go throughout the night and then [Bulfon] just spilled the ball and I was lucky enough to be there to tap it in.”

Although the lack of offensive plays was the tale of the match on Friday at Stone Stadium, the Gamecocks were able to create some opportunities to score during regulation.

For instance, as time was winding down in the 82nd minute, South Carolina put up three shots on the scoreboard from junior midfielder Jared Gulden, senior forward Tucker Monheimer and sophomore forward Andrew Halloran within just 20 seconds.

“That’s what we want. We want to be a team that puts constant pressure on the opponent," Berson said. "I thought that was what we want to do. Sometimes they go in, sometimes they don’t, you just got to be tough and keep pushing.”

Friday night’s win over the Spartans is the first time the Gamecocks were able to capture multiple extra-time wins in one season since 2014.

While the Gamecocks did pick up their second-consecutive extra time win, Banahan was able to pick up a goal in two consecutive matches for South Carolina, as he also grabbed a goal in the 78th minute in the Gamecocks’ 2-1 win over Gardner-Webb on Sept. 3 at Stone Stadium.

Next up for the Gamecocks is the Mercer Bears (3-0) on Sept. 11 at 7 p.m. in Stone Stadium. Mercer is coming off a 3-2 win over the UAB Blazers on Friday night as a part of the Bears’ three-game winning streak to start the season. The Gamecocks and Bears have met a total of six times; the last meeting was in 2017 and South Carolina defeated Mercer 2-1.