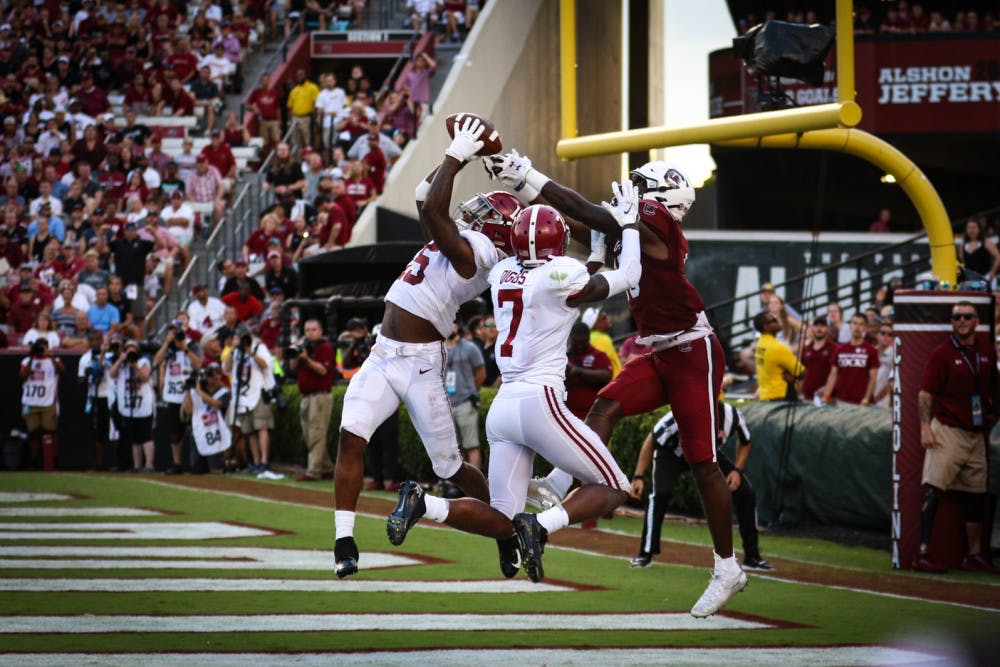 Gamecocks unable to keep up with No. 2 Alabama in Saturday's loss

By Nate Shirley , and Allison LaPlaine

The Gamecocks fell to the Crimson Tide 47-23 on Saturday at Williams-Brice Stadium in their SEC season opener.

Alabama came to Columbia with a 2-0 record following a 62-10 victory over New Mexico State.

South Carolina sported a 1-1 record coming into the matchup after bouncing back from a season opening loss with a 72-10 victory over Charleston Southern.

The Gamecocks won the toss and deferred, putting the ball into Alabama's junior quarterback and Heisman hopeful Tua Tagovailoa's hands to begin the game.

Tagovailoa led Alabama's offense down the field, with a 24-yard touchdown pass to running back Najee Harris.

The Gamecocks answered with a 44-yard field goal by placekicker Parker White, which at the time was a career long. However, he eclipsed that mark later in the game, setting his career long at 48 yards.

The defense made a stand on the second drive, forcing a three-and-out while sacking Tagovailoa twice. Unfortunately for the Gamecocks' defense, this would be one of the only times they stopped Alabama's offense.

Gamecock freshman quarterback Ryan Hilinski threw for 324 yards and two touchdowns in his first SEC game. He turned the ball over late twice, as Alabama linebacker Anfernee Jennings forced a fumble and safety Xavier McKinney came away with an interception.

Edwards shared the advice he gave Hilinski at the end of the game.

“He’s a true leader, so anytime we lose, he’s gonna take the blame for it,” Edwards said. “I just told him, ‘You did a great job out here, in your second start and it’s a top-five ranked team. Just keep your head and we’re going to get it turned around.’”

Head coach Will Muschamp also said he was pleased with his young quarterback.

“I was really proud of [Hilinski’s] effort today,” Muschamp said. “He’s a great competitor, and he’s a battler. You saw him in there today, hanging in there against a really good defense, taking some shots and continuing to battle and play. That’s what you want.”

While Hilinski’s development is exciting, he has his own storyline off the field.

There has been an outpouring of support for Hilinski and his family in their efforts to raise awareness for the mental health of student-athletes through the Hilinski’s Hope Foundation, which they created in honor of Hilinski’s late brother, Tyler.

It began circulating on social media that “everyone should stand for the first play of the third quarter and hold up the number three in the air” during the game against Alabama. When the time came, the fans in Williams-Brice Stadium did just that, a hush falling over the crowd in a moment of silence and respect for Tyler Hilinski, who died by suicide in January 2018.

“I appreciate, number one, our fanbase supporting the Hilinski Foundation. It’s for a great cause,” Muschamp said. “That’s something that means an awful lot to everyone in our organization ... Coach Tanner and his administration have emphasized the mental health side of things since I’ve been here at South Carolina.”

South Carolina appeared to take the lead with a touchdown on the second offensive drive of the game with a fake field goal that White ran for 33 yards into the end zone, but a holding penalty by tight end Kyle Markway negated the score.

Edwards said the mistake “shift[ed] the momentum back” to Alabama’s side.

The Gamecocks also had a chance to score going into the half and possibly cut Alabama's lead down to a single possession. Down 14,  Muschamp elected to go for it on fourth and goal from the three-yard line and the offense was unable to punch the ball into the end zone.

While, overall, the Gamecocks saw decent success in the passing game, especially considering the opponent, the pass-catchers could not hold onto the ball. Junior tight end Nick Muse had a few bad drops and sophomore wide receiver OrTre Smith also struggled.

While some receivers struggled, wide receiver Bryan Edwards had nine receptions for 79 yards, leading the team in receptions.

Following a game where the Gamecocks set a single game school record with 493 rushing yards against Charleston Southern, the running backs did not see similar production.

The Gamecocks travel to Columbia, Missouri to play the Missouri Tigers Saturday, Sept. 21. Kickoff is scheduled for 4 p.m. ET and the game can be viewed on SEC Network or SEC Network Plus.