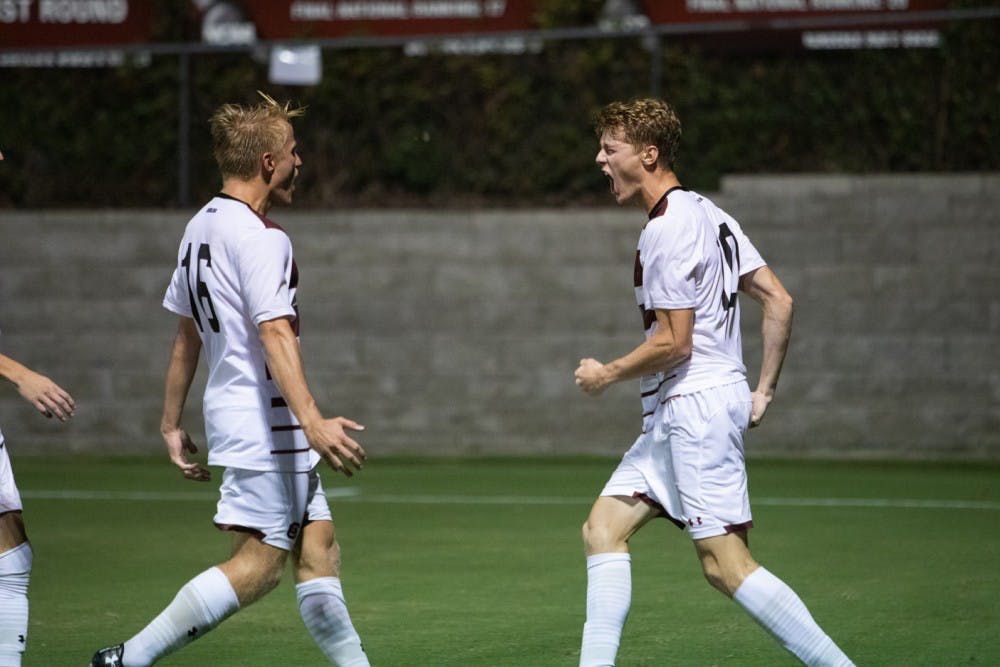 By Paige Davoren , and Katelyn Smith

The South Carolina men's soccer team defeated the Mercer Bears by a score of 1-0 Wednesday night in the last of a three-game home stand.

Going into Wednesday's matchup, the Bears were undefeated and came to Columbia sporting a 4-0 record, while the Gamecocks were 2-1.

The last matchup between the Gamecocks and the Bears was in 2017. South Carolina won 2-0, bringing its record against Mercer to 10-1-0.

During a slow and scoreless first half, the Gamecocks took control, recording three shots on goal.

In an attempt to get points on the board, the second half was full of substitutions for the Gamecocks. Frano Buhovac and Seth Wiebusch led the way for South Carolina.

Stone Stadium was quiet as the Gamecocks made their way into extra time for the third straight match.

South Carolina was finally able to capitalize and score a goal, resulting in another extra time win for the Gamecocks.

"This team is still developing. It's a really young group," head coach Mark Berson said. "What we're trying to do is just sort of solidify our identity."

The first half was dominated by senior Tucker Monheimer, who had one shot and one shot on goal.

"The only thing going through my head is I need to get a goal ... That kind of mentality is what pushes me forward to finally get one at the end," said Monheimer. "I took the shot, and it took a little deflection so I didn't know if it was gonna go in, but the keeper dove the wrong way."

South Carolina goalkeeper Buenyamin Yusufoglu continued his already successful season with five saves in Wednesday's game. The junior transfer from Florida Southern is third in the nation in saves per match and seventh in total saves.

"I was not expecting many shots, but the game situations always change, so you never know what's gonna happen exactly," said Yusufoglu.

Berson remains the winningest active NCAA Division I men's soccer coach in his 42nd season with the Gamecocks. The team's win over Mercer on Wednesday brought Berson his 499th win at South Carolina.

"We've had a ton of injuries. So tonight we were able to get two or three players back on a limited basis. Hopefully, they're gonna be able to continue to grow," Berson said.

The last time these teams met was in 2018, when the Gamecocks fell to the Herd in double extra time.

Marshall leads the series with a 9-5-1 record against the Gamecocks.

Fans should be on the lookout for midfielder Logan Hitzeman and forward Brian Banahan in this matchup. Both are freshman who have played substantial minutes for the Gamecocks in the opening games of the season.

Kickoff for the game between South Carolina and Marshall is set for 11 a.m. Saturday in Huntington, West Virginia.