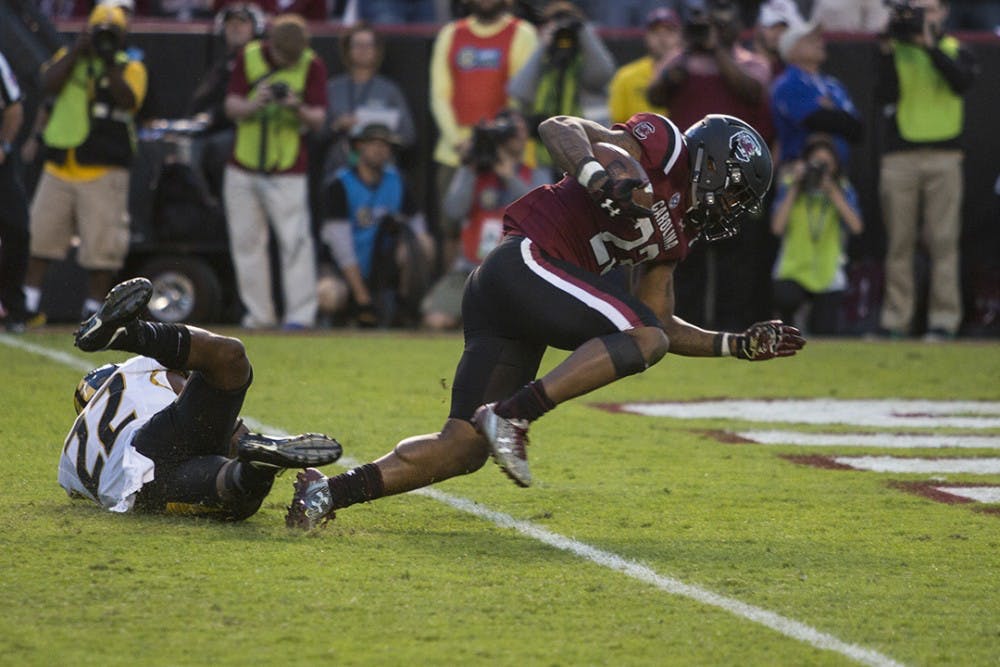 The South Carolina Gamecocks lost to the Missouri Tigers 34-14 Saturday in Columbia, Missouri.

The Gamecocks' defense started off strong, stifling the first scoring threat of the ball game from either side with a fourth and goal sack on the one yard line by sophomore defensive lineman Kingsley Enagbare.

The Gamecocks took over following the turnover and downs, looking to take advantage of the momentum and get some points. Missouri's defense had other plans as senior linebacker Cale Garrett swatted a check-down pass attempt by Hilinski.

Instead of letting the ball fall to the ground incomplete, Hilinski caught the ball and spiked it behind him. Since the ball was still in play, it was ruled a fumble and Garrett scooped up the ball and gave Missouri their first points of the afternoon with a fumble recovery touchdown.

The Gamecocks attempted to answer back on the next drive with points, but a missed 49-yard field goal by Parker White left them scoreless.

South Carolina was not able to get on the board until senior linebacker DJ Wonnum came up with a pick and ran it back 21 yards to the one yard line, where senior running back Rico Dowdle punched the ball in for a touchdown.

This stand would not last, as the Gamecocks struggled on offense and the defense could not contain the Tigers' offensive attacks. The Gamecocks ended the day with a 34-14 loss.

Hilinski ended with 166 yards on 13-30 attempts. He also threw for a score, via a 74-yard screen pass senior wide receiver Bryan Edwards took to the house on the opening play of the first half, and an interception.

The running game was also a non-factor in this game, as South Carolina rushed for a total of 16 yards throughout the contest. Dowdle led the rushers with 17 yards on eight attempts, including his one yard touchdown.

The Missouri rushing attack went for 194 yards. Junior running back Larry Rountree III led the way with 88 yards on the ground and Bryant was not far behind, totaling 77 yards on the day.

Bryant also did damage through the air, throwing for 227 yards and two touchdowns. He also threw the previously mentioned interception to Wonnum.

The turning point of the game was halfway through the third quarter. Hilinski opened the half with a 74-yard touchdown pass, and the Mizzou lead seemed within reach.

With time running out in the third quarter and his team down 24-14, Hilinski set his offense up in the red zone. That work was undone by a 100-yard interception return touchdown by Missouri's senior safety Ronnell Perkins that put the Tigers up 31-14.

The ground attack from South Carolina never quite got going, and a third quarter fumble from Dowdle added to those struggles.

This group showed promise this year, but will have to find holes and create plays while protecting the ball for the Gamecocks to have offensive success.

For the Gamecock offense to have success without injured senior quarterback Jake Bentley, Hilinski has to start hitting open receivers.

Edwards had a successful day statistically, finishing with 113 yards and a touchdown, but his numbers should have been much higher. Hilinski missed a wide open Edwards on multiple occasions.

Hilinski struggled in the first half, ending with only three yards passing, but he rebounded and had a better second half before eventually getting pulled once the game was virtually decided.

Freshman quarterback Dakareon Joyner showed what he could do dropping back and throwing the ball, something many have questioned if his ability to do at this level. He ended the day with 89 yards passing on 6-11 attempts.

If Joyner can continue to develop his ability to pass the ball, he can be a weapon for the Gamecocks as a wildcat quarterback or a mobile change up from Hilinski's west coast quarterback style.

The Gamecocks return to Williams-Brice Stadium looking to bounce back from the disappointing loss against the Kentucky Wildcats. Kickoff is scheduled for 7:30 p.m. and the game will be televised on SEC Network.