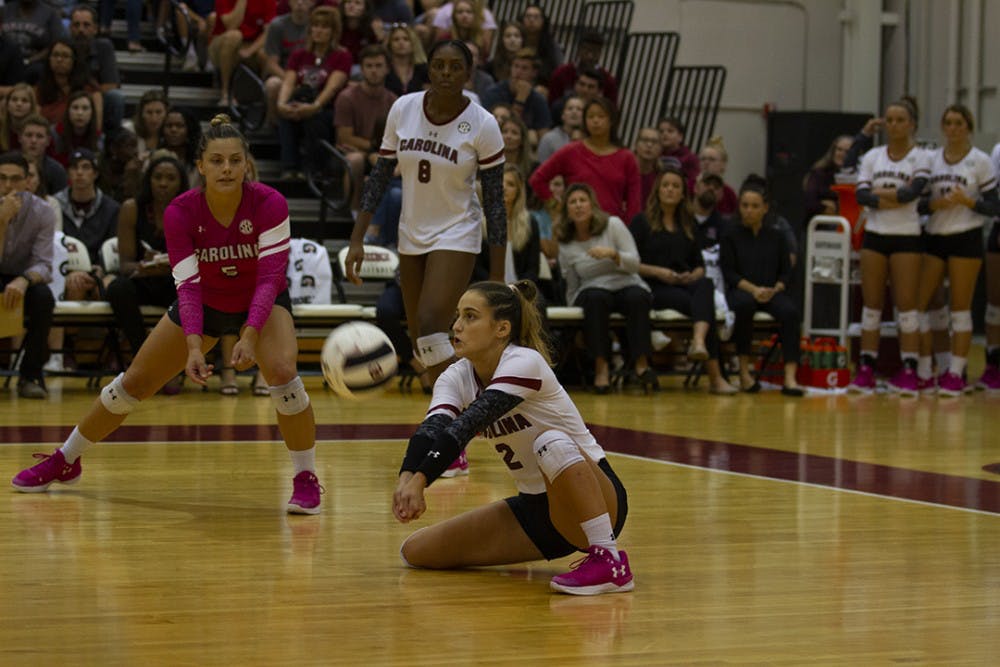 The South Carolina volleyball team was able to grab one win out of three games in the Panther Challenge to begin the 2019 season.

A comeback win by South Carolina over Cleveland State in its second game was sandwiched between losses to the University of Cincinnati Bearcats on Friday night and the No. 12 Pittsburgh Panthers on Saturday night at Fitzgerald Field House in Pittsburgh, PA.

The Gamecocks kickstarted their season in Pittsburgh on Friday night with a matchup against Cincinnati, who finished its 2018 season with a 28-6 record.

After the Gamecocks and Bearcats swapped victories during the first three sets, Cincinnati held on to win the decisive fourth set 25-21 and the match 3-1.

Senior setter Courtney Koehler recorded 42 assists against the Bearcats. Those helpers bring her career total above 2600, which currently places her in the top ten in South Carolina program history.

The Gamecocks found success in their second game at Fitzgerald Field House on Saturday morning. This time around, their opponent was the Cleveland State Vikings of the Horizon League Conference.

After securing a 25-19 win in the first set, the Gamecocks lost both the second and third sets to the Vikings before narrowly winning the fourth set, 25-23. During the fifth and final set, the Gamecocks fell behind 5-1, but rallied back to win the set by a 15-10 score. The team’s 3-2 win over Cleveland State marks its first win of the season.

To conclude the Panther Challenge, South Carolina faced off against its toughest of the three opponents in the tournament: Their host, the Pittsburgh Panthers, who entered the contest at the No. 12 spot in the national rankings. Last season, the Panthers suffered only two losses in 2018 en route to winning the ACC championship.

On Saturday, Pitt defeated the Gamecocks in three straight sets (25-21, 25-16 and 25-20) to earn the sweep. South Carolina middle blocker Claire Edwards led all hitters in the third set with five kills, but the Pitt attack as a whole was too large for the Gamecocks to overcome in the Steel City.

Following his team’s showing in the Panther Challenge, Gamecocks head coach Mendoza expressed optimism in his team and spoke about what it can take away from its first three matches of the season.

“We learned what it takes to be successful and beat good teams,” Mendoza told Gamecocks Online following the Panther Challenge.

“That’s another advantage of playing good teams early," Mendoza said. "That’s why our athletes signed up for this. They want to play at the highest level. They want to come to South Carolina and play the top competition and learn how to be successful against the top teams.”

Mendoza added that he saw improvement out his team from each of its matches to the next in Pittsburgh: “If we keep doing that and taking it one day at a time, getting better each day we have on the court, I really like this group.”

Next on the docket for the Gamecocks is the three-day UCF Tournament in Orlando, Florida. The Gamecocks will travel to Orlando to face Central Florida, Kansas and Albany, starting on Sept. 6.

South Carolina’s first match on their home court in Columbia comes on Tuesday, Sept. 10 at 7 p.m. They will host the Charlotte 49ers before traveling upstate to Clemson to face the rival Tigers and the Wisconsin Badgers on Sept. 12 and 13, respectively.