Opinion: An impeachment trial is necessary 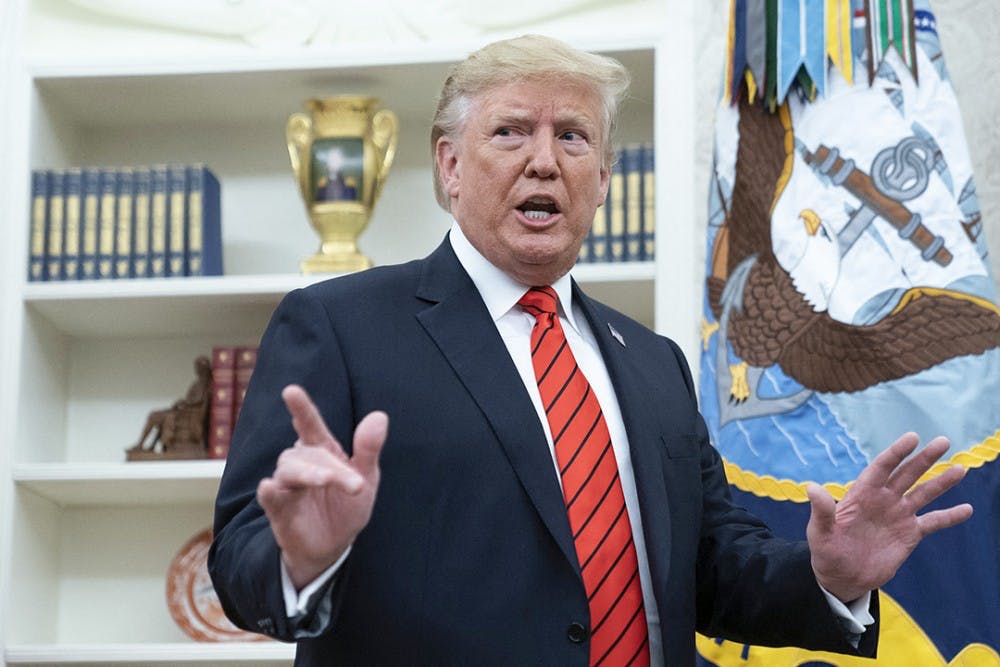 In the American political systems, irrationality and unreason are problems which are fundamentally prevented through countless acts of legislation.

Take, for example, the checks and balances throughout the governmental branches, the many aspects of interaction between local and state governments or the innumerable laws to regulate the process within each group.

The process of impeachment is no different.

Today, there is nationwide coverage of an impeachment inquiry into our current president, Donald Trump. Constitutionally, “Treason, Bribery, or other high Crimes and Misdemeanors” are all acts punishable by impeachment. In this case, varying degrees of impeachment have been on the table multiple times during our current president's time in office. Because of similar items, there has been discussion, litigation and investigation over varying controversies for a large portion of his presidency.

However, it was not until Sept. 24 that Nancy Pelosi, the residing speaker of the house, announced official inquiry and acts into the impeachment process would commence due to Trump's admittance of "unconstitutionally asking the president of Ukraine to take actions which would benefit him politically."

Pelosi's previous hesitation to fully commit to the impeachment process was most likely caused by focus within the House towards matters still pertinent and more probable to influence. Official inquiry seemed drastic, but justly so.

Impeachment should not be taken lightly, and objectively, even the most incapable or detestable presidents have still been voted upon and should be respected for the time being, as this is the only way to uphold the values of a government. Impeachment should not be based on general dislike or recurring opposition to the legislature within the contrasting partisan party.

Nevertheless, impeachment exists to combat truly treacherous acts against the nation. It is a necessary clause for specific situations like today. As it will have many components and ongoing decisions, the outcome will not be made lightly or with bias. The structures of the impeachment process within the House and the Senate will operate and conclude with justice and purpose. The process, conclusion aside, is equally as necessary as any other political happenings.

The allegations against Trump are, firstly, the withholding of Congress-approved money to help Ukraine, which happened before he would make the phone call in question. It also seems unfounded and unreasonable that he would withhold this aid, which would provide Ukraine with much needed and previously-allocated money. Not only this, but the publicly available phone call is supposedly worded in a pressing manner towards the president of Ukraine about information and investigation of Joe Biden's son's previous actions in Ukraine.

It seems no matter what the decision, some act here is necessary.

If the situation was completely innocent, a whistleblower never would have felt the need to come forward in the first place. The fact that there even is a whistleblower seems to suggest misdoings. Not only this, but there is also the controversy of the White House attempting to hide the ordeal, which seems like another point of suspicion. Partisan bias aside, there are many facts of the standings that seem to be conclusive red flags.

The information has also been confirmed, therefore it is not completely an allegation, and entails enough to be deemed so extreme that an inquiry was enacted. Impeachment talks have been going on for a while, but this situation was the final straw for many higher-up democrats, especially Pelosi, to merit a concrete act.

Besides, if the president's actions are proved factual, the act is more than enough for impeachment.