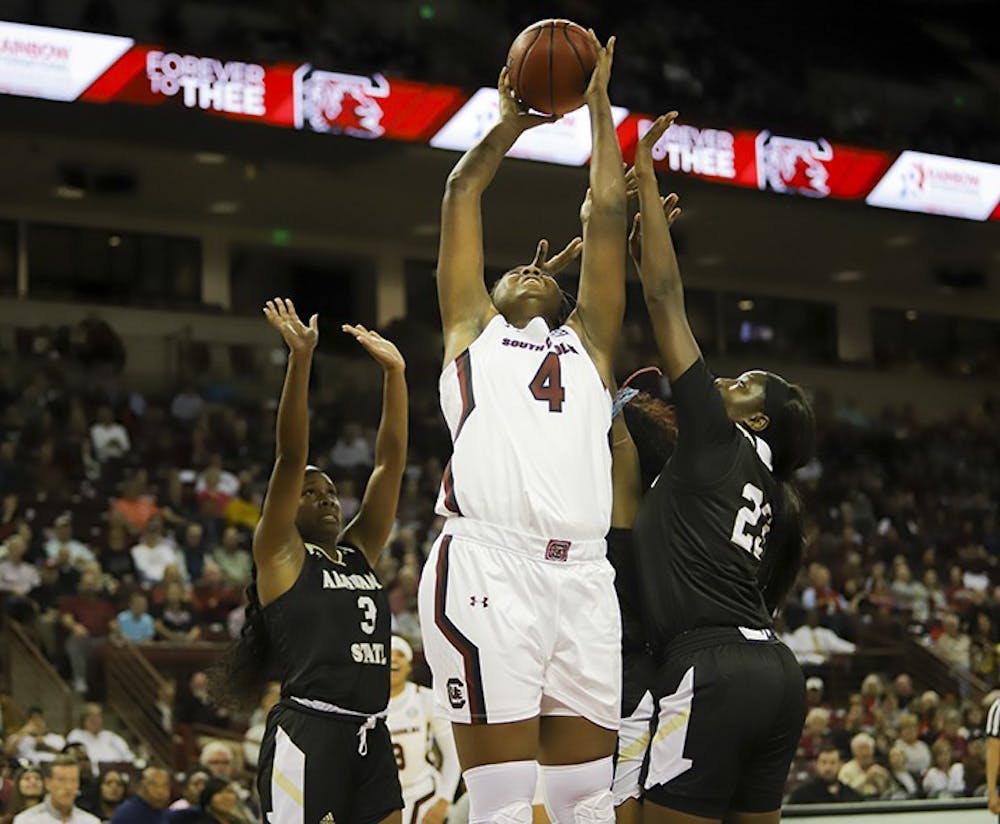 Freshman Aliyah Boston recorded a triple-double Tuesday night in her debut with the South Carolina women's basketball team. The team tipped off its regular season with a 103-43 win over the Alabama State Hornets.

Boston got off to a quick start after Alabama State got into some early foul trouble. She got to the line early and was able to net both free throws. The combination of Boston and Herbert Harrigan down low showed a lot of defensive power for the Gamecocks.

This early defensive showcase caused the Hornets to start slow, as they were unable to grab their first field goal until there was just over five minutes left in the first quarter. They were able to gain some ground, though, and ended the first quarter down by six points to the Gamecocks.

Alabama State took that momentum into the second quarter and hung around for a bit, but foul trouble helped the Gamecocks who capitalized off free throws and maintained a steady lead. South Carolina shot 22-32 from the line, while the Hornets shot 14-21.

The second quarter also saw continued dominance from junior Lele Grissett off the bench. She finished with 10 points and seven rebounds. Sophomore Destanni Henderson also provided some fire off the bench, ending the game with eight points and four assists.

Alabama State went two-for-11 at one point during the second quarter and went into halftime down 43-24.

Boston and Herbert Harrigan both got off to a hot start after the half. Boston had a double-double by the end of the third quarter and had a plethora of blocks on the defensive side, finishing with 10. Herbert Harrigan ended with 13 points.

Alabama State’s foul trouble continued into the second half, as redshirt senior Zomoria Clark fouled out early, causing the Gamecocks to extend their lead with free throws.

An early fourth quarter shot clock violation forced a turnover and the Gamecocks took control. Boston reached 10 blocks in the fourth quarter, which gave the freshman a triple-double in her first ever regular season game.

Freshman Olivia Thompson also checked into the game, hitting two early three’s, totaling 10 points, seven of which came in the first minute on the court. Like the exhibition game against North Georgia, every Gamecock that touched the floor Tuesday night put points on the board.

South Carolina will travel to College Park next to take on the No. 4 Maryland Terrapins on Sunday at 3 pm for a top-10 matchup. The game can be viewed on ESPN.