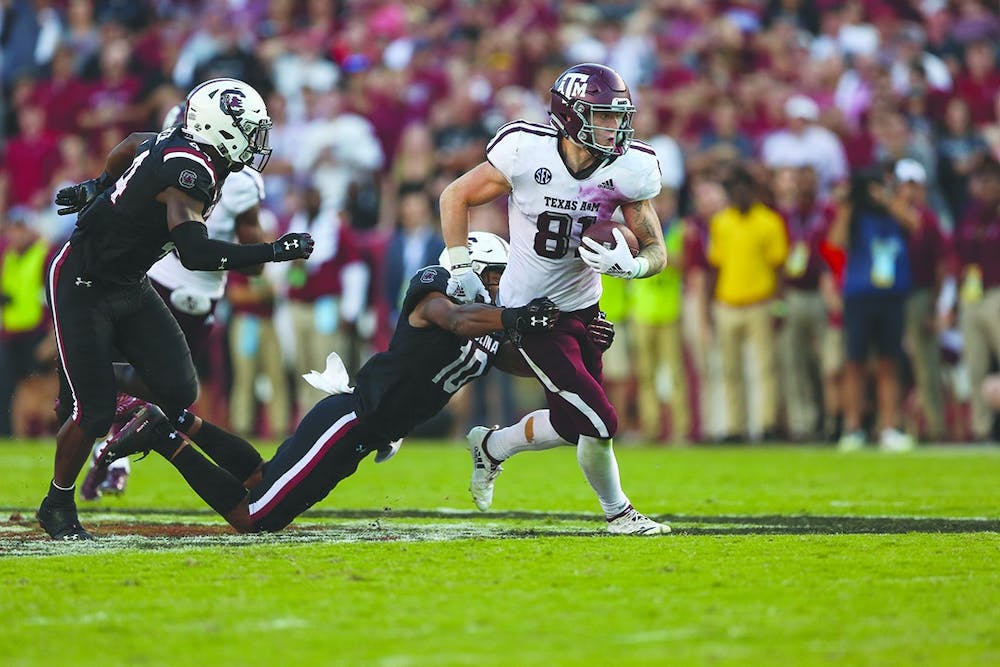 The South Carolina and Texas A&M football teams are far from rivals.

The Aggies are the newest SEC team, and they have faced the Gamecocks every year since 2014. Each year, the Aggies have walked away with a win.

For the Gamecocks to earn their first win over Texas A&M, they must take advantage of their ability to force turnovers.

The A&M offensive attack is led by quarterback Kellen Mond. Mond is following up a breakout sophomore campaign with a fantastic junior year, leading the Aggies to a 6-3 record this season.

Mond has been able to generate plenty of offense through the air this season, throwing for over 2,200 yards, good for third best in the SEC. He trails only LSU's Joe Burrow and Alabama's Tua Tagovailoa in that category, as offensive guru Jimbo Fisher has his team throwing the ball with plenty of success.

The Gamecocks are no stranger to facing high-powered passing offenses. Facing the likes of Florida and Alabama, South Carolina has been victim to offenses that like to get it done through the air.

Mond has been effective at keeping the ball out of the hands of the defense this year, as he's thrown just six interceptions to 17 total touchdowns. Meanwhile, the Gamecocks' defensive secondary has been turning it on as of late.

Dating back to the matchup against Missouri, the Gamecock defense has forced nine interceptions in its last seven games. Most notably in that stretch is the victory over Georgia, in which the team forced a season-high three interceptions, all by Israel Mukuamu.

The run of turnovers has landed at No. 4 Gamecocks in both interceptions and passes defended in the SEC.

Despite the short history and lopsided nature of the matchup, the "rivals" do have their own trophy, which is surprising for such a fresh matchup. So surprising, in fact, head coach Will Muschamp didn't learn of its existence until last season.

"That's the first I've heard of this," Muschamp said to 247Sports in 2018. When asked about its whereabouts, he was uncertain. “Well, hell, we ain’t won, so we ain’t got it over here, I can tell you that.”

Where the home run play has hurt the Gamecocks, however, is when they swing and miss. Despite their ability to get their hands on the ball, they have been spurned by many big plays in the passing game.

The defense is giving up roughly 228 passing yards per game to go along with an average of almost two passing touchdowns per game. For context, both of those numbers rank in the bottom four in the SEC.

That said, this game is primed to turn into a shootout at College Station. Both teams like to throw the ball, and both teams share an innate inability to stop big plays through the air. It might just come down to the turnover battle, where the Gamecocks hold an advantage.

With the loss to Appalachian State on Saturday, South Carolina stands at 4-6 on the season and needs to defeat the Aggies and upset in-state rival Clemson to clinch bowl eligibility.

While the Gamecocks have a very small chance to win both games and make it to a bowl game, they will look to earn their first ever win against the Aggies Saturday, with kickoff scheduled for 7:30 p.m. on the SEC Network.