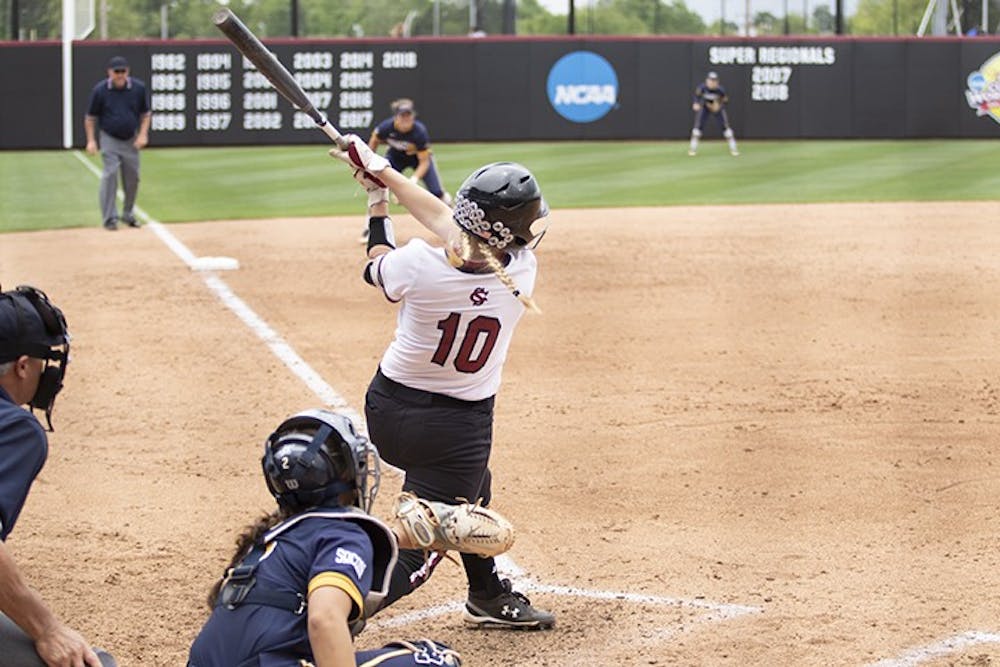 After losing in the regional championship in 2019, the Gamecock softball team is aiming high in the upcoming season as multiple team members said they want to play in the College World Series in Oklahoma City.

Head coach Beverly Smith said the team’s biggest strengths are its offensive depth and its infield, but the outfield is currently a “question mark,” as she doesn’t know yet who will take over the corner positions. But she said she is “optimistic” about what’s in store for the team this year.

“I’m feeling good about it,” Smith said. “We’ve got a lot of good depth, and I just like the team. I like what’s in the locker room, and it’s fun to come to work every day with their personalities.”

"We're in the SEC, so every team’s good, so we just have to be leaders and take advantage of what’s given to us,” Maguire said.

The Gamecocks will open their season in Columbia hosting the Carolina Classic tournament and will head to Clearwater, Florida, the following weekend for the St. Pete/Clearwater Elite Invitational.

“I really like that we’re gonna be in Clearwater at that ESPN tournament and think it — speaks to just the interest people have in softball that ESPN’s willing to put it on TV in February,” Smith said.

South Carolina will meet Clemson on the softball diamond for the first time this season on April 7. The Gamecocks will get home-field advantage for the rivalry matchup in the Tigers’ inaugural season.

“I think that it’s gonna be an awesome rivalry,” Smith said. “It’s great for the student-athletes and the fans. You know, it’s something that our players have never had, and so I think it’s great for the game.”

“I really love the rivalry; I think it’s cool. I’m not from South Carolina, so I don’t think I fully get it, but I really love it, and I’m excited for it to be taken into softball, too,” Oh said.

As an upperclassman with some experience and familiarity with the team, Oh said she wants to be “someone that people can come to” and expects to have a leadership role on the pitching staff, which now has six pitchers.

South Carolina will be starting the season ranked No. 21 in the country by FloSoftball and No. 20 by D1Softball.

“It’s awesome, but it’s just a preseason award, so it doesn’t really determine anything,” Johns said. “I’m not really focused on that. I’m just focused on what’s ahead and what I can do to get better each day.”

Johns said she is excited about the team’s depth this season.

“Coach Bev always says we have everything it takes in our locker room to accomplish whatever we want, and I really think that we all believe that,” Johns said. “Obviously we didn’t want to lose at regionals last year, so our goal is definitely to get to Oklahoma ... We are focusing on taking it one inch at a time and just focusing on the little things so that we can accomplish the big mission.”

Beckham Field at Carolina Softball Stadium will get an upgrade this spring, and construction on a new video scoreboard is already underway. Smith said the change is a testament to the “investment that [the administration] puts in softball and the student-athletes here.”

The Gamecocks will take on North Dakota State University Feb. 7 at 2:30 p.m. at Carolina Softball Stadium to kick off the 2020 season.