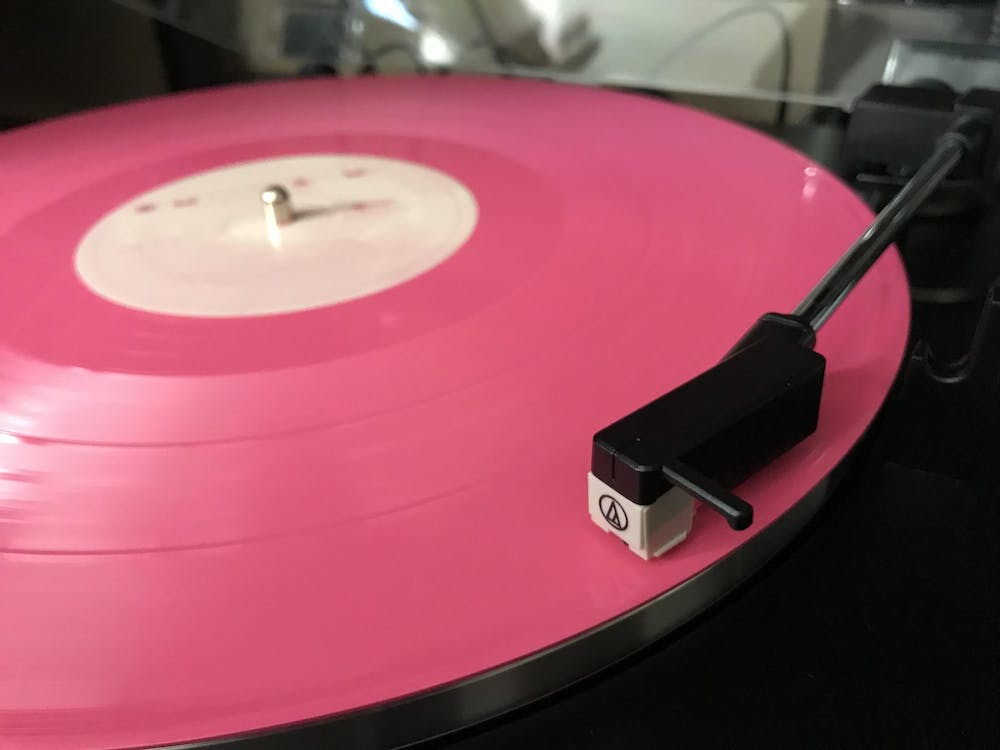 USC student Jesse Milliff set one of her favorite vinyl records, “Signs of Light” by The Head and The Heart, on her black turntable.

The record is one of more than 200 she has in wooden crates on her bedroom floor. Milliff, a third-year business management student, started listening to vinyl because of her dad.

“He showed me all of his records,” she said, sitting under a Beatles poster next to her turntable. “I think Beatles ‘65 was the first one I listened to.”

Milliff is among a large number of people who listen to vinyl records. Nationally, vinyl record sales have increased every year since 2005, reaching over $419 million in 2018, according to the Recording Industry Association of America (RIAA).

Vinyl sales are expected to surpass CD sales this year, in part because of vinyl’s increasing popularity, but also because of a steep drop in CD sales, according to RIAA. In an age when the music industry is ruled by streaming services such as Spotify and Apple Music, vinyl has made its comeback. To be sure, vinyl sales still pale in comparison to those services, but the attraction is visceral and emotional.

“True music lovers and aficionados,” the people behind the numbers, have kept vinyl alive, according to Scratch N’ Spin owner, Eric Woodard.

“As people become more addicted to their phones, everything is instant access, instant gratification,” Woodard said in his store on 12th Street in West Columbia. “Vinyl is kind of like a rebellion against that.”

Sverre Thorvaldson, 45, listens to records in his living room on a record player from the '80s. It’s a brown chest that opens to reveal a turntable, an 8-track player and a cassette player inside.

“Got that a couple months ago,” Thorvaldson said, moving a Bruce Springsteen record to open the top. “If I turn the stereo all the way up, you will hear it all the way down the street.”

He often listens to records, at a reasonable volume, when he’s writing one of his mystery novels. He stopped listening to vinyl when CDs came along, but picked his collection back up a few years ago.

“Now I can actually appreciate the actual music. The lyrics, the sound,” Thorvaldson said. “Back then it was just singing to it, dancing to it.”

While the sound quality is a plus, he said, nostalgia is what keeps him spinning records.

“It brings back memories of my childhood,” Thorvaldson said. “I can picture my late dad and I listening to Christmas records by Nat King Cole and Bing Crosby.”

For graphic designer David Hunt, nostalgia is a byproduct of listening to the music he grew up with. He was 14 when he saw the Beatles on The Ed Sullivan Show.

“As their music grew, my sophistication and listening grew,” Hunt said. “If I listen to Rubber Soul ... it will definitely have memories.”

The 69-year-old has listened to vinyl records his entire life, except for a few years in the early ‘90s when he didn’t have a turntable. He has hundreds of records, old and new, that fill two tall bookshelves.

“The sound quality is, some people say, it’s better than CDs, and in some respects, it is,” Hunt said. “It’s a warmer ... more organic sound than a more digital, steely sound that CDs have.”

Being a music fanatic (he named his son Lennon, after John Lennon), he listens to music in other ways too. SiriusXM radio, for example, is on in his office most of the time. While it’s great for background music, he said, it’s not the same experience as listening to vinyl.

“[Listening to a record] is a much more of an involvement,” Hunt said. “You get the record, you take it out, you put it on the record player. You usually sit down and listen to it, actually listen to the music.”

You start from the beginning and don’t stop until the needle moves over. Then you get up, flip the record over and set the needle again. It’s an intentional, interactive process.

Hunt said appreciating the album art is another part of enjoying vinyl. From poster inserts to liner notes, each record offers a unique experience. He remembers the record “Stand Up” by Jethro Tull, a British band formed in the late ‘60s, had a pop-up of the band that “stood up” when the record was opened.

“The record art and the packaging has always been fantastic,” Hunt said.

Most of the time, people sit through an entire album when they put on a record, hearing an artist’s full creative story from beginning to end. Unlike digital production of music, vinyl can be scratched, adding pops and skips to the songs. For most listeners, this is part of vinyl’s appeal.

“I was so, just, particular about, ‘Oh, there’s a pop’ — I’d take it back and get another copy,” Hunt said, reflecting on buying records when he was younger. “Now, I listen to records and if they have that in them, I feel like it’s sort of the charm of the media.”

It’s people’s connection to music, Woodard said, that will keep vinyl growing in a time where the music industry is driven by the quick, digital release of the newest songs.

“[People] create an emotional connection with music,” Woodard said. “Vinyl is the ultimate format for experiencing music and for being able to immerse yourself into it.”

In her room, Milliff sits beside all of the records she’s collected, reminders of a love of music passed from father to daughter.

“When I’m listening to stuff on vinyl, I’m listening to everything. Everything involving the music,” Milliff said as the needle clicked back into place. “It feels more real and more at home than any other kind of thing that I’ve ever experienced before.”