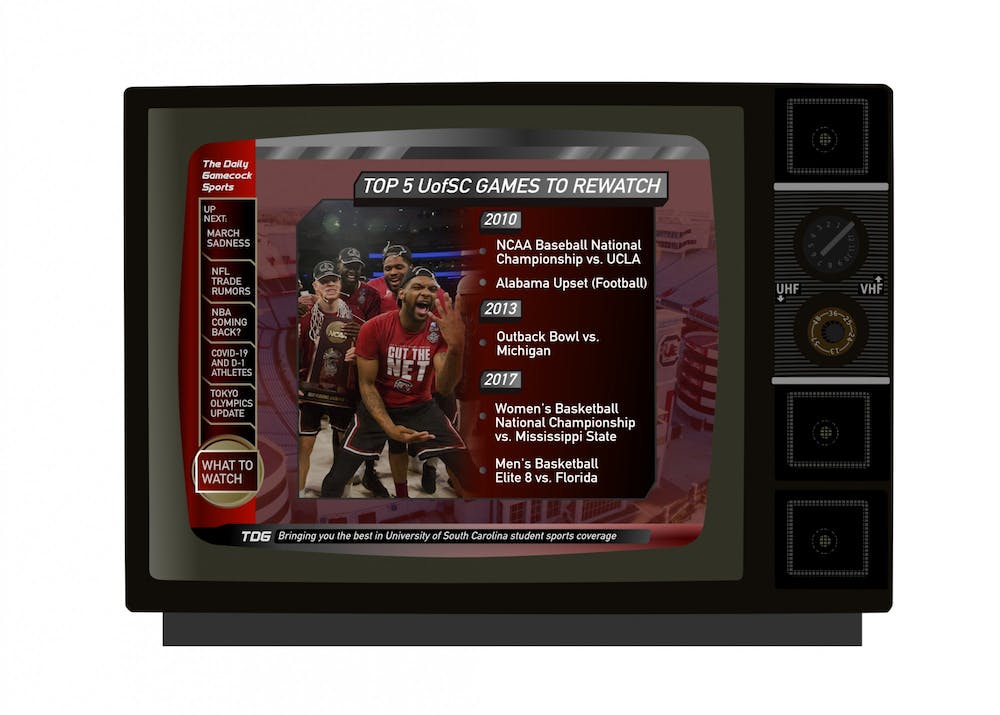 The sports world has come to a screeching halt in the past few weeks with the threat of the COVID-19 pandemic spreading throughout the world. Sports fans across the globe don’t know what to do now that their beloved teams won’t be competing for the foreseeable future. Luckily, the internet has given us multiple platforms like Youtube that provide us with an almost unlimited supply of past games to watch. While we may have lost Gamecock sports for a while, that doesn’t mean we can’t still watch them. Here is a list of games that are a must-see for Gamecock fans stuck in quarantine.

After falling short in the 2015 Final Four to Notre Dame, Gamecock head coach Dawn Staley and the South Carolina women’s basketball team were able to capture the program's first ever national championship in 2017 after defeating SEC rival Mississippi State 67-55 in Dallas. The team was led by Gamecock legend A’ja Wilson with 23 points, 10 rebounds and four blocks and support from Allisha Gray, who finished the game 18 points, 10 rebounds and three blocks. The win further cemented Staley and Wilson’s status as Gamecock greats and continued the birth of a new dynasty in collegiate women’s basketball.

After losing in their CWS opener, the Gamecocks were able fight their way through the losers’ bracket and face UCLA in the CWS final, taking out rival Clemson on their way. South Carolina was led by future Gamecock legends Jackie Bradley Jr., Whit Merrifield and Michael Roth throughout the entire tournament. However, Merrifield was the one who put the 2010 team in the history books. After winning game one 7-1, the Gamecocks were one win away from taking home their first NCAA title in program history. After going into extra innings tied at one run apiece, Merrifield was able to pull off the late game heroics by hitting a walk off RBI single The State newspaper dubbed “the single heard 'round the Palmetto State” to win the game for South Carolina.

After securing the team’s first NCAA tournament win since 1973 against Marquette, the Gamecock men’s basketball team began a miracle run that would end up being the best in team history. In the second round, South Carolina upset No. 2-seeded Duke, a perennial powerhouse in college basketball, led by Sindarius Thornwell’s 24 points and a strong performance from Chris Silva. Once advancing to the Sweet Sixteen, the Gamecocks would upset the No. 3-seeded Baylor by 20 points with another stellar performance from Thornwell and company. In the Elite Eight, the Gamecocks continued the magic after defeating SEC rival and No. 4-seeded Florida, punching the ticket to their first Final Four trip in program history.

Gamecock football upsets No.1 Alabama at home and goes on to win 2010 SEC East title

In what was one of the most electric games in the history of Williams-Brice Stadium, the Gamecocks were able to upset the Crimson Tide 35-21. The South Carolina offense was led by quarterback Stephen Garcia and running back Marcus Lattimore, who had a combined five touchdowns in between them. Wide receiver Alshon Jeffery also showed out in the game with seven catches for a total of 127 receiving yards. The Gamecock defense also put on a show, holding Alabama running back Mark Ingram, the previous year’s Heisman trophy winner, to 41 rushing yards in the game. The win was one of nine the Gamecocks had that season and helped the team clinch their first SEC East championship in history.

The 2013 Outback Bowl is best known for the fourth quarter performance amongst South Carolina fans and for good reason. After Michigan ran and converted its second fake punt of the day, despite a visibly bad spot that had the South Carolina sideline furious, it seemed all hope was lost for the Gamecocks. The next play, however, would be etched into Gamecocks' minds forever: "The Hit." Defensive end Jadeveon Clowney came off the edge and rocked Michigan running back Vincent Smith, sending his helmet and the ball flying. Clowney was able to recover the fumble he forced and set up Connor Shaw and the Gamecock offense for a touchdown that would give South Carolina a late lead. The Gamecocks would go on to beat the Wolverines 33-28, securing South Carolina’s second-straight 11-win season.