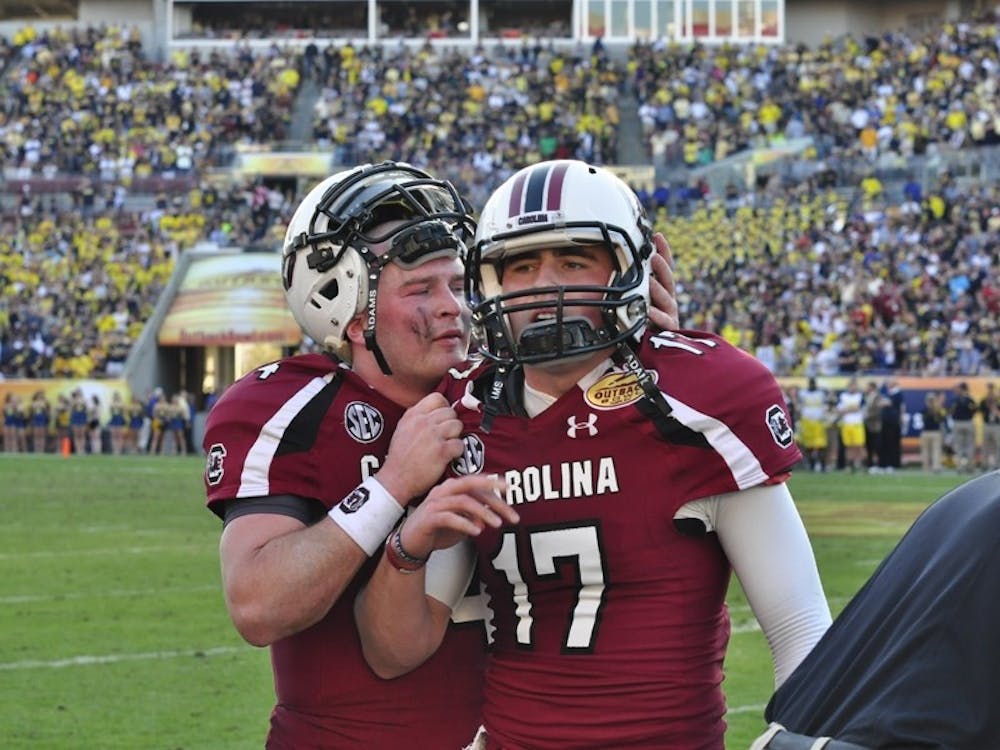 The sophomore said he “took a pretty hard shot in the ribs” during the play so he didn’t see Ellington score it, but the roar of the crowd told him his throw had found its mark with 11 seconds left in the game.

“We haven’t won one like that since I’ve been here, in eight years,” Spurrier said.

“We battled the fourth quarter, all the way down to the wire,” said junior wide receiver Ace Sanders. “We showed this team is going to fight hard, and we’ll be back next year to do the same thing over again.”

The comeback win was a fitting conclusion to a tumultuous season. South Carolina reached its highest ranking of the season after its sixth consecutive win, a 35-7 demolition of Georgia on national television with ESPN College GameDay on campus.

But two straight road losses, to LSU and Florida, derailed the Gamecocks’ goal of winning the SEC East. The following week saw a season-ending injury for junior tailback Marcus Lattimore, who was on the sidelines for the Outback Bowl.

Despite the setbacks, the Gamecocks have now won 31 times in the past three seasons, making this senior class the winningest in school history.

“People feel good about being a Gamecock,” said athletics director Ray Tanner. “That’s what it’s all about.”

Sanders, the Outback Bowl MVP, finished the game with nine receptions for 92 yards and three touchdowns. But the junior was not on the field for the 32-yard game-winning pass, although he lined up for the failed two-point conversion that followed.

Ellington, on the other hand, had just two receptions on the day. The first, a 4-yard catch, came on the first play of USC’s last drive.

“I was getting a little frustrated that I wasn’t getting the ball,” Ellington said. “[Teammates] told me just to be patient. The ball will come to you.”

Junior Connor Shaw started the game at quarterback, but Thompson came on in the second quarter, completing four consecutive passes for 75 yards to give the Gamecocks their third touchdown of the afternoon. Shaw returned for the next drive.

“We tried to tell Connor, ‘It’s your game,’ and it was his game,” Spurrier said. “But Dylan’s going to play. He understood that. It worked out beautifully.”

It was the junior who began USC’s final rally. The Gamecocks trailed 28-27 after Michigan scored a touchdown with 3:29 left in the game and could not complete a two-point conversion. Five passes by Shaw brought South Carolina to the Wolverines’ 43-yard line before his nagging foot injury forced him out of the game.

Thompson, who attempted two passes in the third quarter and did not complete either, took over mid-drive.

The sophomore was knocked down by Michigan linebacker James Ross III as soon as the pass left his hands, but Ellington caught it at the 2-yard line and ran it in.

“I saw open area and Bruce running,” Thompson said. “So I figured there was a good chance of it getting caught.”

Ellington said he had to change his route to run around a safety he saw in his peripheral as he made the catch.

“I saw it coming and it felt like it was in slow motion,” Ellington said. “I knew I had to catch it for the season, for the team.”

With the win, Spurrier said the Gamecocks have accomplished eight of the 10 goals they set for themselves this season. Although they did not win their division or play for the conference championship, Spurrier said beating Clemson and winning their bowl game were two objectives they successfully met.

“But not the best it could be,” Spurrier said. “It could be better. We’re still going to get better.”

Even with the promise that next season brings, the program’s unprecedented run of success has already begun to impact the university. USC President Harris Pastides did not address the team prior to the game, although he said he saw many players in the lobby of the hotel on gameday.

Pastides said he wanted the team to know that their Outback bowl appearance was a matter of state pride.

“Because we’re the university for South Carolina, when we do well, it makes an impact nationally, far more broadly than they can imagine,” he added.

Combined with the baseball team’s run of three straight appearances in the finals of the College World Series, including two wins, the football program has created an expectation of winning that basketball coach Frank Martin said his team will strive to emulate.

“If the guy next to me is winning, then I want to win too because I want to represent our school the same way they do,” Martin said. “That’s the awesome thing about Coach Spurrier and the football guys. They’re taking football to new heights here, and that’s exciting to me, to build a program so we can compete the way they’re competing right now.”

The comeback win capped off a season of many milestones. But according to Thompson, the Gamecocks sent an important message in the closing seconds of the Outback Bowl.