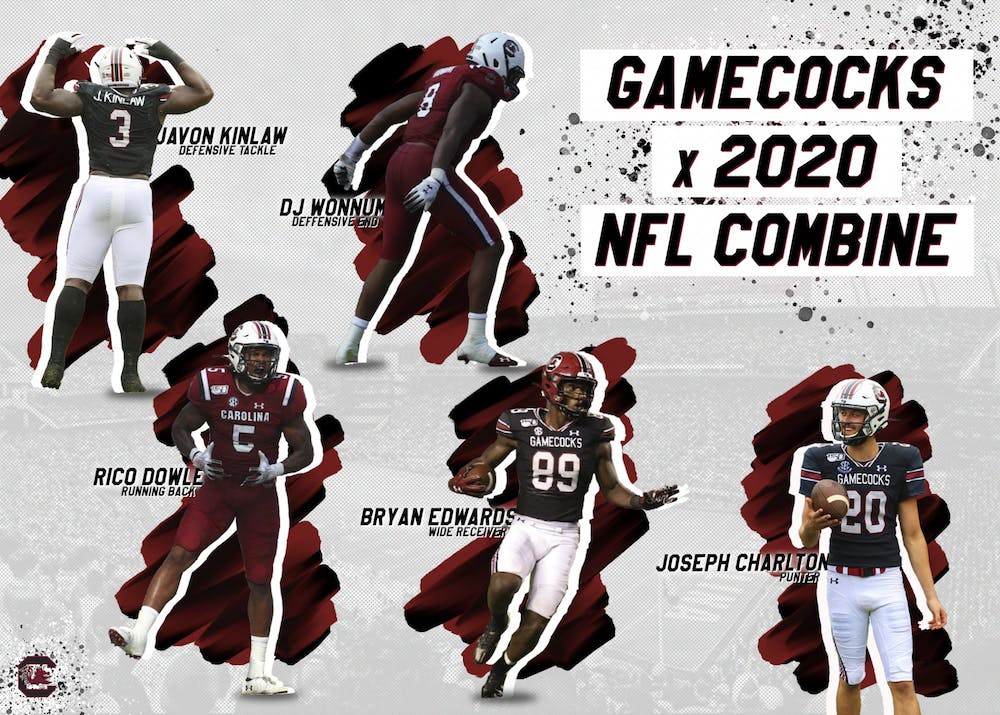 With the NFL draft right around the corner, 337 prospects were invited to Indianapolis to perform in the NFL scouting combine in hopes of impressing teams before the draft on April 23. Among those NFL hopefuls are five former Gamecocks: Javon Kinlaw, Bryan Edwards, D.J. Wonnum, Rico Dowdle and Joseph Charlton.

Each player will perform in a set of workouts based on their position and a series of interviews with the scouts, coaches and the media. Teams use this process to gauge which players fit the best on their rosters. The events took place from Feb. 23 to March 1.

Bryan Edwards, a 6-foot-3-inch wide receiver from Conway, South Carolina, was set to perform in the receiver workout on Feb. 27 when he suffered from a broken foot while training. Edwards did participate in other combine events, such as meeting with teams, doing media interviews and going through medical examinations.

Edwards was voted to the coaches’ second-team All-SEC squad and was invited to the Reese’s Senior Bowl but sat out due to a knee injury. Analysts have been impressed with his consistent productivity during his college career but say he needs to work on using size on 50/50 throws and improve his route-running.

Rico Dowdle is a 5-foot-11-inch running back from Asheville, North Carolina, who performed in the 40-yard dash, vertical jump and broad jump at the combine but did not participate in any media interviews.

Dowdle finished with an athleticism score of 92, which was the second highest among running backs who participated. Dowdle’s size and toughness have been strengths when looking at his college career at USC, but NFL analyst Lance Zierlein is concerned about his fumble rate and technique during pass protection.

Wonnum was selected second All-SEC and played in the Reese’s Senior Bowl after his senior season. He was also named the permanent team captain as a sophomore. Zierlein said he was impressed with his ability to create pressure on a secondary rush effort but was worried about his limited play speed and range.

Javon Kinlaw, a 6-foot-5-inch defensive tackle from Charleston, South Carolina, participated in all combine events except for the workout on Saturday, Feb. 29, due to a small knee injury. Kinlaw was voted first-team All-American by the Associated Press and first-team All-SEC by coaches. He was also invited to the Reese’s Senior Bowl following his senior season at USC.

Zierlein noted there were still inconsistencies. Toughness, versatility in scheme and an explosive first step round out his strengths on the field, but Zierlein feels he needs to work on his control and technique.

Joseph Charlton, a redshirt senior punter from Columbia, South Carolina, was measured at 6-feet-4-inches and 195 pounds but did not participate in any other events at the combine.

Charlton was second-team All-SEC and received multiple awards during his time at the University of South Carolina, including the Jim Carlen Award and Most Productive Player for special teams. He averaged 47.7 yards per punt during his senior season, which was the third best in the country, and beat the school record for single-season yards by three yards.

These players and more will be performing one more time before the draft at the Gamecock Pro Timing Day on March 19.