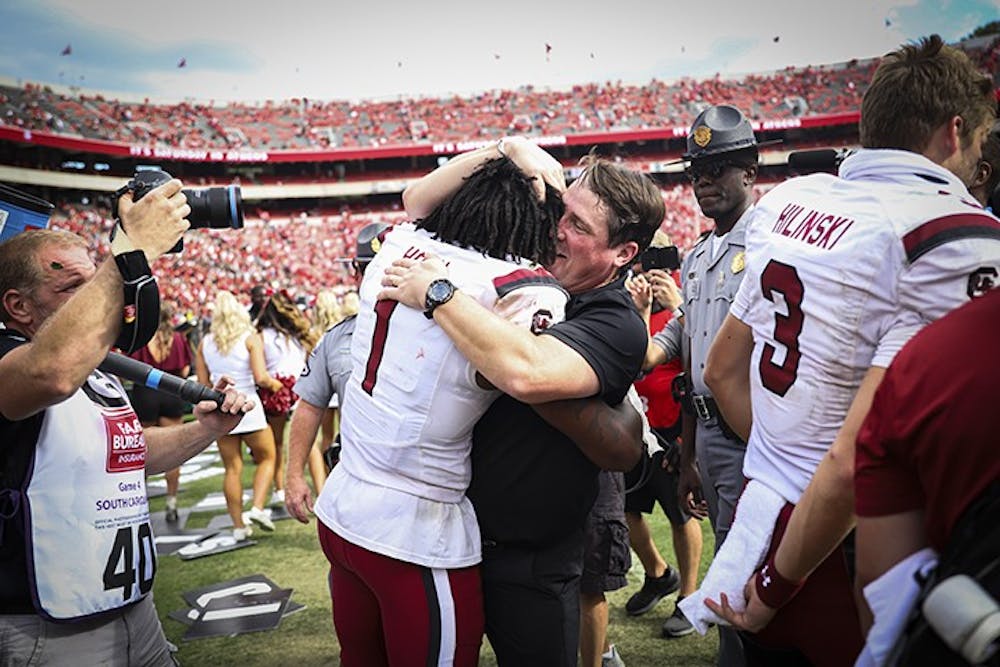 Column: Top moments in the last year of Gamecock Athletics

While the 2019-2020 athletic year was unfortunately cut short due to concerns surrounding the COVID-19 outbreak, there have still been many exciting moments for the Gamecocks this past year to look back on. During these strange and stressful times, it is important to remember the moments that had Gamecock fans all over the country cheering.

Gamecock football upsets Georgia in an overtime thriller in Athens

The Gamecocks entered Sanford Stadium in Athens, Georgia, as the underdogs against No. 3 Georgia on Oct. 12, but they managed to pull off one of the most exciting upsets of the year.

“In the bottom lines, we did what we had to do to win the ballgame,” head coach Will Muschamp said in a postgame press conference.

It was obvious early on this was not going to be a normal day for the Gamecocks, as the defense held the usually dominant Bulldogs to only 10 points in the first half. The first of three interceptions for sophomore defensive back Israel Mukuamu was returned for a touchdown to put South Carolina up 17-10 at halftime.

A dominant performance defensively held Georgia to a touchdown late in the fourth quarter to tie the game and send both teams into overtime. The first overtime ended scoreless after a missed field goal from junior kicker Parker White, which White made up for in the second overtime when he scored a 24-yarder that put the Gamecocks ahead 20-17. A missed 42-yard field goal from Georgia kicker Rodrigo Blankenship sealed the upset for the Gamecocks, shocking fans across the SEC.

The No. 1 Gamecock women’s basketball team made program history on Feb. 10 after taking down the No. 5 Huskies for the first time in front of a sold-out Colonial Life Arena 70-52.

“We haven’t beat a team like UConn ever, and you can hear every single person in this arena wanting us to do that,” head coach Dawn Staley said at a postgame press conference.

The Gamecocks fell to the Huskies in the previous eight meetings between the two teams. The overpowering offensive and defensive performance from the Gamecocks kept them in the lead throughout the entire game. Senior Tyasha Harris led the team offensively with 19 points and 11 assists, and freshman Aliyah Boston led defensively with 12 rebounds and three steals. The overwhelming fan support and participation during this game made it even more special for not only the team but all Gamecock fans.

The South Carolina men’s basketball team defeated the No. 10 Kentucky Wildcats with an incredible comeback win in the final seconds of the game on Jan. 15.

“Lot of credit to our guys that we can, obviously, play a team as good as Kentucky and, even though we got down, have the courage to keep fighting and win it,” head coach Frank Martin said in a postgame press conference.

The Wildcats held the lead for most of the game. Midway through the second half, it looked as if Kentucky had secured the win when the Gamecocks began to catch up, thanks in part to redshirt freshman Jermaine Couisnard, who put up a career-high 26 points.

With seven minutes left in the second half, redshirt freshman TJ Moss and sophomore Alanzo Frink cut Kentucky’s lead to just 4 points, keeping the Gamecocks in the game. The two teams were tied with just under three minutes left in the game, and Kentucky pulled ahead by one point with just 4.1 seconds left. The game-winning 3-point buzzer-beater from Couisnard that came next would become an instant classic, making the final score 81-78.

The No. 7 South Carolina women’s soccer team won the SEC championship for the first time since 2009 after beating the No. 1 Arkansas Razorbacks 1-0. Junior forward Ryan Gareis scored the Gamecocks' winning goal, while senior goalkeeper Mikayla Krzeczowski led the defense to hold off the Razorbacks for the remainder of the game.

This game was Krzeczowski’s 47th career shutout, tying for the fifth best in the NCAA’s all-time record book. Grace Fisk was named the MVP of the SEC tournament. The team then advanced to the NCAA Tournament, where it reached the Elite Eight round before losing to Washington State in overtime.