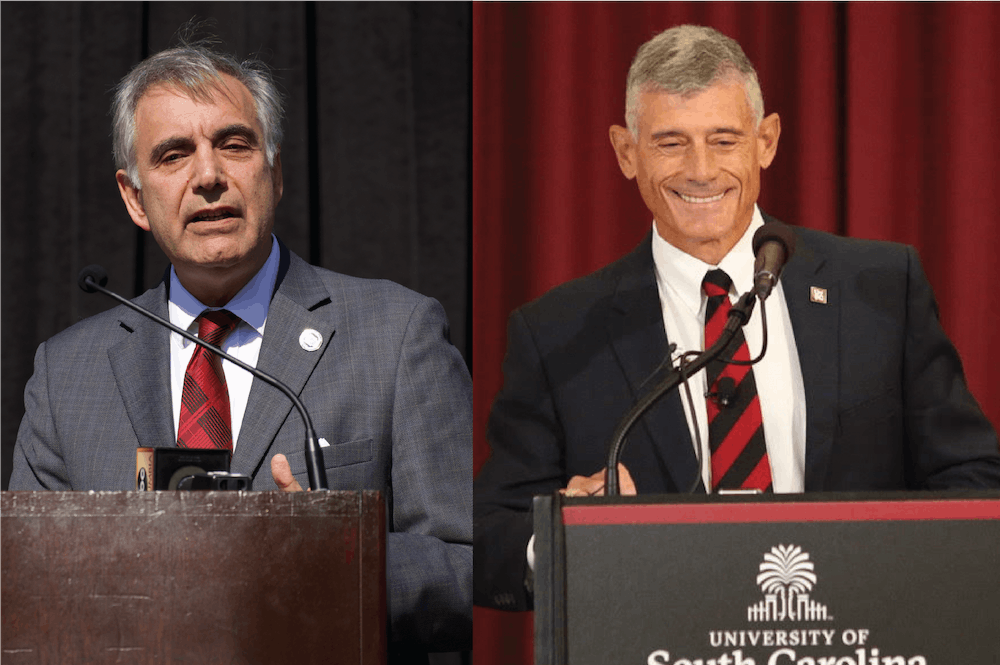 The tale of two presidents

The class of 2020 experienced two different university presidents during its four years on campus.

Harris Pastides and his wife, Patricia Moore-Pastides, lived on the historic Horseshoe during the class' freshman, sophomore and junior years. The Pastides handed the reins to Bob Caslen and his wife, Shelly Caslen, for the class of 2020’s senior year.

As USC’s president for 11 years, Pastides built a reputation of smiling selfies, high fives and interacting with students.

“I will always remember how friendly and approachable President Pastides was,” fourth-year public health student Rebecca Early said in a survey conducted by The Daily Gamecock. “He always made you feel like he cared.”

Calling to congratulate students who earned awards, participating in new student orientation and speaking at convocation are among some of Pastides’ favorite memories at USC. He also spoke of skydiving with students, allowing the student body to choose and decorate his car — a Mini Cooper — and holding “Mini Conversations” in it with students, alumni and others.

During his time at USC, Pastides celebrated baseball, basketball, football and equestrian victories. He said he took a “special liking” to women’s sports like softball, volleyball and golf.

When the honors college was ranked No. 1 in the U.S., he felt “deliriously happy," and to this day, Pastides said he can remember waking up to see that the international business and public health programs were among the top-rated in the world.

“Really too many positive moments,” Pastides said. “But I will also say that there was tragedy that created a permanent scar.”

Pastides said each tragedy made him and his wife feel pain almost like a parent’s pain.

“[The class of 2020] was a special class because I felt guilty about leaving them when they were juniors,” Pastides said. “And I said, ‘Don’t worry, we had three great years together, and they’ll find a great successor of mine.’”

These days, Pastides keeps busy by representing USC on national committees as the president emeritus. He is writing what he hopes to be a book about communicating with college students, and he and his wife have been traveling since he left USC. Currently, they’re in Ireland, and due to the COVID-19 outbreak, their one-month vacation will nearly triple in time.

He is also getting back to his roots as an epidemiologist and is plugged into the World Health Organization. He consults critically important companies on how to keep their employees safe from COVID-19 and gives advice to organizations that coordinate student exchanges.

While he said he misses the students “passionately,” he is happy to have found a sense of purpose in this pandemic. His farewell message to the class of 2020 speaks to how the lessons they learn from navigating COVID-19 will prepare them for future battles in life.

“I want them to know that we must all take care of ourselves and each other,” Pastides said. “This is not only about COVID-19, it’s about mental health. The world, unfortunately, will present them with much anxiety and fear. But, they will prevail.”

Pastides said he wants the class of 2020 to ask for help when they need it. They will need to lean on family, friends and health professionals.

“I want them to know that, having had a USC education, I’m 100% confident that they are well equipped to navigate the challenges they’ll have,” Pastides said. “I couldn’t be more proud of the class of 2020. … I’m always available for anything they might need from me — I’ll never be that far away.”

The path to finding the next president

After Pastides announced his retirement, the search for a new university president was not a smooth one. Student organizations and faculty members signed an open letter that protested the selection of finalists who were all male.

Later on in the search, protestors rallied against Caslen in the Alumni Center. The protesters said they were mainly concerned with Caslen’s lack of a terminal degree, which refers to the highest degree in a field of study, and his lack of experience with a research university like USC.

That same day, USC Upstate chancellor Brendan Kelly was selected as an interim president. But, in July, Gov. Henry McMaster attempted to force an early board vote to confirm Caslen. Because McMaster did not give written and verbal communication five days before the meeting, a judge placed a temporary injunction on the meeting.

After forums, meetings and press conferences, the board voted 11-8 on July 19 for Caslen to be USC’s next president. The Southern Association of Colleges and Schools Commission on Colleges conducted a formal review into the mid-July events and determined there was "undue influence" in the selection process.

To begin earning trust, Caslen said the first thing he did in office was to have a discussion with students that had opposed him during the search.

During last summer’s controversy, third-year history major Robert Cathcart had openly supported Caslen. He said he chose Caslen because he was the only one in the running who had already led a college. Caslen was the superintendent of West Point before coming to USC.

Months later, when Cathcart's chapter of the South Carolina Student Legislature beat Clemson, he was invited to an ice cream social at the president’s house.

“I think you should be able to relate to students, and I think he does that well through working out,” Cathcart said. “But that doesn't mean he has to sit there and be, you know, super jovial all the time and all smiles and selfies. ... He has been able to bring a sort of adult demeanor, if you will, to the position, but at the same time he's very personable.”

Caslen has participated in activities around campus such as Hip-Hop Wednesday, Dance Marathon and the Carolina-Clemson Blood Drive.

“All those sorts of things are things that I wanted to do to demonstrate to students that I was with them, approachable and that I cared about them,” Caslen said.

He said he also wants to encourage students to live a life of excellence. As an incentive, he created excellence coins that members of the USC community can earn. For Caslen, it gave him an opportunity "to say thank you and to celebrate." One of the ways that students can earn a coin is by completing 10 workouts with Caslen.

Bobby Herpel is a fourth-year public relations and African American studies student who works out with Caslen three to four times each week.

“He’s very — in anything that he does — he is very serious. You can tell that there’s an end goal in line,” Herpel said. “He will explain the workout in the beginning and then we will have like closing remarks in the end but during it, he’s focused, driven. There's not any kind of distractions.”

Herpel said that when Caslen enters a room, his presence demands attention.

“He exudes excellence, and he’s a very easily respectable man,” Herpel said. “I think the future of the university is very, very bright with him as our stronghold and our leader.”

Caslen believes his early decision to move classes online was "bold" but necessary.

He said the last semester of senior year is one of the best times in a student's life. As a final attempt to salvage the graduates' final semester, Caslen promised that USC will hold a commencement ceremony.

“We’re going to do it when it’s safe and secure and there’s no threat to anyone else,” Caslen said. “If there’s any way we can make up this second semester by partying on the Horseshoe or whatever, we would love to be out there and to drink a beer with them and party with them, because they deserve it.”