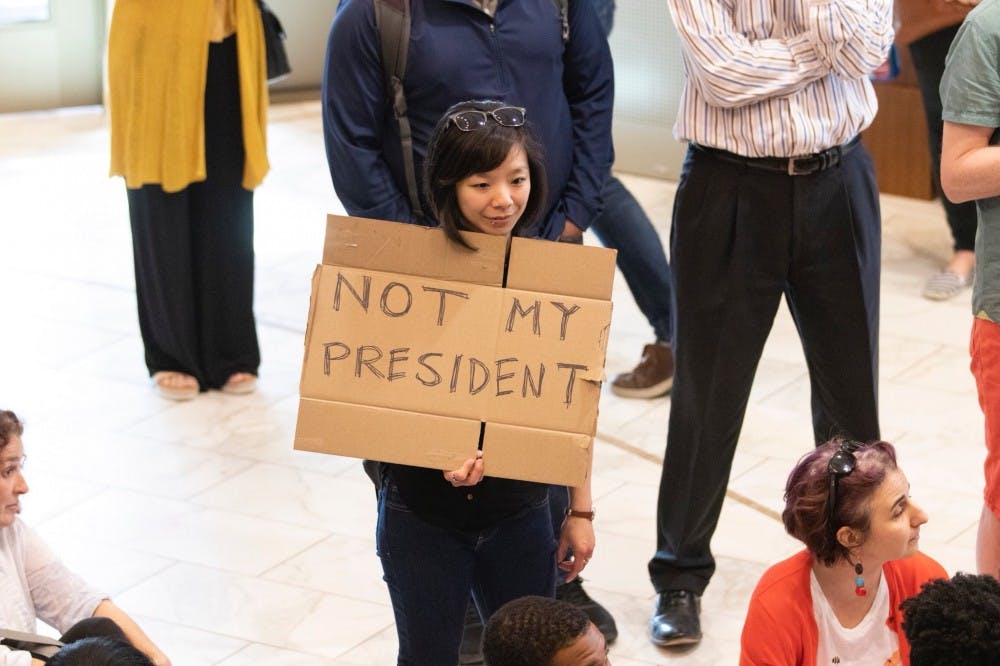 The search so far: Path to a new president

Oct. 3, 2018: Harris Pastides announces he is stepping down from the USC presidency during his State of the University address.

“I have no doubt that USC is in a strong position now to recruit an able leader who has all the right stuff to take the reins and hopefully to accelerate our progress,” Pastides said during his speech.

The faculty senate chair, Marco Valtorta, is also a voting member, along with Robert Dozier Jr. and William Hammett Jr., the chair of the alumni association and a representative from a support foundation, respectively.

“They have to be student friendly. That’s number one on the list. If students aren’t the reason you’re here, and not why you’re excited to get up, and not why you do everything, then that’s an issue,” former student body president Taylor Wright said about the future president. “They have to be someone who cares about diversity and inclusion and equity, not someone too polarizing in either direction.”

Wright has since graduated; however, according to the board of trustees bylaws, the student body president serves on the Presidential Search Committee until the search is over, regardless of whether they have reached the end of the term and graduated.

Over 30 student organizations and 125 faculty members signed the letter which criticized the Presidential Search Committee's determination of a finalist pool with four men and no women.

“We are not attacking the qualifications of these candidates; we are criticizing the process that led to their selection,” the open letter said, read by Megan Rigabar, a fourth-year global studies and Spanish student.

Protesters said they were concerned with the lack of diversity within the board of trustees, where 19 out of 22 members are white males.

Protesters also said the search committee fell short of finding a diverse group of candidates for USC’s next president, despite the committee saying it was going to focus on that exact principle.

“The committee saw a pool of more than 80 individuals, diverse in terms of both underrepresented minorities and gender,” USC spokesman Jeff Stensland said. “While the pool did not result in a female finalist, each of these candidates has expressed a strong commitment to diversity and carrying out the diversity strategy recently approved by our board of trustees.”

The candidates spoke to students, faculty, staff and administration at forums from April 22 to 25.

USC students protested Caslen, a favorite among board members, before the board of trustees was set to announce the new university president.

The protesters said they are mainly concerned with Caslen’s lack of a terminal degree and lack of experience with a university like USC.

“This is real, this matters," Ethan Magnuson, a second-year political science and geography student, said. "This is going to determine the future of the university.”

Valtorta said that following the protests in the Alumni Center, the board called Brendan Kelly, USC — Upstate chancellor, about the job around 3 or 3:30 the same afternoon.

The resolution acknowledges the Board of Trustees' responsibility to select USC's president and says "no university president can hope to succeed without the support of the faculty and students." The resolution states support should be embraced going forward in the presidential search.

Pastides said "all kinds of contact and communication are important" between faculty, students and the Board of Trustees.

Stensland said the resolution is not binding.

July 9, 2019: Gov. Henry McMaster forces a vote by the board of trustees in an attempt to confirm Caslen as president

The vote was planned for Friday, July 12. McMaster's decision caused many students to voice their opinions on Twitter.

No thank you, I'll continue to protest what I want. The thousands we pay yearly makes us qualified https://t.co/V82kKE39Yr

As of July 9, the survey received over 170 responses.

"This man does not have the same experience that the other two candidates have. There should be reconsideration over this decision. He is NOT the future of this school," read one response.

Student Government executive members held an open forum for USC students in the nursing building auditorium Wednesday evening to discuss the state of the university’s presidential search. Over 100 students and faculty attended the forum to voice concerns over how McMaster inserted himself into the presidential search.

Student Body President Luke Rankin presided over the meeting, flanked by Student Body Vice President Sophie Davish and Speaker of the Student Senate Davis Latham, and responded to students’ concerns for over an hour.

“We want to ensure that when we speak, when I speak, to the board, that we are giving the voice of every student,” Rankin said.

Benjamin called for the board of trustees’ vote to be cancelled because of a South Carolina law requiring a five-day notice prior to the announcement of a board meeting. He said USC students have paid more money in tuition than some board members have donated to USC, and therefore students should have a say in the presidential candidate.

The USC faculty senate passed two resolutions in opposition of Caslen’s candidacy as president of the university.

The first, motioned by Bethany Bell, an associate professor in the College of Social Work and chair of the faculty welfare committee, criticized the state of the presidential search and said it has turned into a partisan operation.

The second was a vote of no confidence against Caslen as a candidate for the presidency, motioned by Simon Tarr, a faculty senator and media arts professor.

July 11, 2019: Board of trustees postpones vote on Caslen due to court orders

Judge Robert Hood placed a temporary injunction on the meeting scheduled for July 12. The law states board of trustees members must have a written and verbal communication five days prior to a meeting. Members were notified Tuesday morning, three days prior to the meeting.

“In his capacity as the ex-officio chairman of the university’s board, the governor has contacted each of his fellow board members and has encouraged them to select a permanent president for the University of South Carolina as soon as possible. To suggest that the governor, who by law is a member of the board of trustees, did anything improper is preposterous. Governor McMaster has made no secret about the fact, that as a member of the board, he believes Gen. Robert Caslen is supremely qualified and is perfectly suited to address the challenges ahead for the University of South Carolina."

July 19, 2019: Board of trustees choose Caslen as president

After two hours behind closed doors, the board voted for Caslen 11-8. Trustee William C. Hubbard abstained.

During the July 19 meeting, trustee Charles Williams said, "This thing stinks with politics," about the search and asked where McMaster was at the meeting, noting his absence.

Trustee Richard Jones said, “[Caslen] is a very successful leader and I must admit I have a great admiration for the military," and he feared Caslen will be gone if USC didn't select him as president now.

After observers and security filtered out, protestors chanted “shame” as trustees exited the boardroom.

The protestors of Caslen’s candidacy marched from Russell House to the Alumni Center the morning of July 19 and stayed until its conclusion that afternoon.

"My pledge to all of you is that we will engage, we will listen, we will learn and we will work together to advance the cause of this university and the university system," Caslen said.

After reviewing the overwhelmingly skeptical comments from students, faculty and staff during the original presidential search in April, Caslen said he was humbled. He welcomed the comments and learned from them, particularly that he needs to articulate his statements so they represent exactly what he means, he said.

"When a leader fails to open themselves up to criticism, that leader is only looking at issues from a very narrow perspective, and if you're going to be an effective leader, you have to have the humility to listen and to understand across the entire spectrum of thought," Caslen said.

Another issue Caslen addressed is concern about USC losing its accreditation which is awarded by the Southern Association of Colleges and Schools (SACS). Caslen said he is "very concerned" with losing accreditation and shares some of the same worries as SACS. He mentioned possibly bringing in outside firms to assess the governance of the board of trustees, such as one brought into the University of Central Florida.