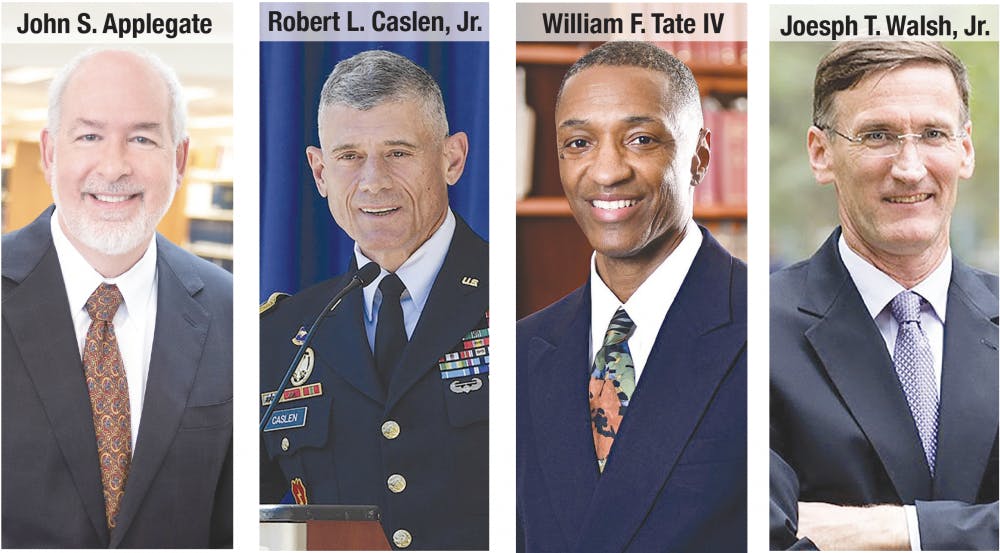 University presidential candidate finalists: What you need to know

The Presidential Candidate Search Committee announced its four finalists for the next university president at a meeting last Wednesday.

The hour-long sessions will consist of a 30-minute presentation by a finalist, followed by a Q&A for those in attendance. Anyone can also submit anonymous input on the finalists through April 26 using an online form.

ADDITIONAL INFO: Applegate is a lawyer and law professor whose employment history includes work at the U.S. Court of Appeals, Covington & Burling Law Firm, University of Cincinnati College of Law and Vanderbilt University School of Law. Applegate has taught and done research in France, Wales and Germany. He is a published author of five books and articles on legal topics. Applegate has been at Indiana University since 1998, where he has been heavily involved in overseeing various elements of the university’s functions.

CURRENT OCCUPATION: Senior counsel to the president of the University of Central Florida

ADDITIONAL INFO: Caslen is a former lieutenant general who served in the military for 43 years, including service in Iraq from 2010 to 2013. Following his time in the military, Caslen served as the 59th president/superintendent of West Point from 2013 to 2018, during which West Point was recognized by Forbes as the No. 1 public college in the country and by the U.S. News and World Report as the No. 1 public liberal arts college in the country. During his time at West Point, he was a staunch advocate for combating sexual assault on college campuses. Caslen wrote the "National Military Strategic Plan for the War on Terror" and has produced other works regarding military command and operation. Caslen has served as the senior counsel to the University of Central Florida president since January.

CURRENT OCCUPATION: Dean of the Graduate School and vice provost for Graduate Education at Washington University in St. Louis

ADDITIONAL INFO: Tate's interdisciplinary experiences include economics, mathematics, psychiatry, epidemiology, teaching and philosophy. He has a long history of involvement in research programs at various institutions. At Washington University, Tate is involved in holding research appointments for different fields. He directs the Center for the Study of Regional Competitiveness in Science and Technology at Washington University, a research program focused on the “application of epidemiological and geospatial models to explain the social determinants of STEM (science, technology, engineering, and mathematics) attainment, human health, and related developmental outcomes.” Tate has also been involved in research programs at the University of Wisconsin — Madison and the American Educational Research Association, where he formerly served as president. Tate has coauthored many academic works which focus on topics in STEM fields and barriers to education for African Americans.

ADDITIONAL INFO: Walsh took up a position as assistant professor of Biomedical Engineering at Northwestern University shortly after receiving his doctorate in 1988 and has been involved with the university since. Walsh began serving as the vice president for research at Northwestern in 2007, where he has since worked to develop and improve the university’s research facilities and institutes and helped to position Northwestern as a regional and global leader. Beyond his involvement at Northwestern, Walsh has a voice in various conferences and committees regarding science and technology, including the Argonne Board of Governors, the MIT Corporation Sponsored Research Committee and the American Society for Lasers in Medicine and Surgery, for which he served as president. Walsh has also served on the Naval Research Advisory Committee and as secretary of the Naval Advisory Panel for the U.S. government. Walsh has patents for various surgical procedures and devices.