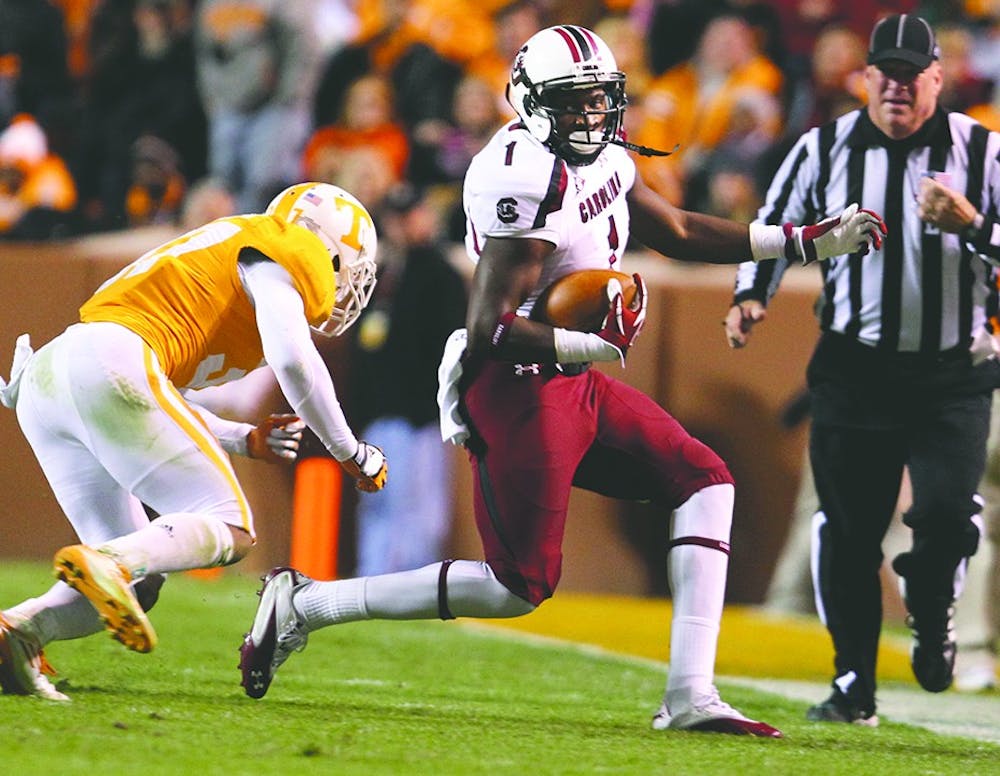 By Nate Shirley , and Lawson Murrell

There have been many greats to represent the Gamecocks on the football field and leave their mark on the program. As challenging as it is to determine who the greatest of all time are, these are some of the most distinguished players South Carolina has seen.

The player who held the record Edwards broke, wide receiver Alshon Jeffery, is still a close second with 3,042 career receiving yards. He finished with 23 receiving touchdowns and averaged 16.6 yards per reception. The 6-foot-4-inch receiver was known for being on the receiving end of end zone jump balls that seemed too good to be true and for making multiple All-SEC and All-American teams.

Defensive lineman Jadeveon Clowney’s career as a Gamecock made him the Houston Texans' first overall pick in the 2014 NFL draft. Throughout his three seasons, he racked up 24 sacks, including 13 sacks in 2012. Clowney was selected as a unanimous All-American and received the Ted Hendricks Award for the best defensive end in the country in 2012.

Kicker Elliott Fry gave the Gamecocks a consistent leg to rely upon all four years of his career. From 2013-2016 he only missed one extra point out of 162 attempts. He has a 75% field goal percentage for his career and is No. 10 in the SEC for career points with 359. Fry's range was a huge asset for the Gamecocks. He was able to kick a career-high 55-yard field goal against Vanderbilt his senior season, winning the game.

Defensive back Stephon Gilmore was a lockdown corner for the Gamecock defense from 2009 to 2011. He came away with eight interceptions through three seasons, highlighted by four interceptions in his junior season. He was always a threat on the blitz, with seven career sacks.

Linebacker Eric Norwood was a consistent terror for opposing defenses, whether he was lined up in the linebacker position or on the defensive line. His versatility and consistent production was vital for the defense's success from 2006 to 2009. He amassed 29 sacks, making him No. 5 on the career SEC sacks list. He also boasted 255 total career tackles and currently has the most career tackles for a loss in SEC history with 55.

With more than 6,000 passing yards and 1,500 rushing yards, quarterback Connor Shaw helped lead the team to a bowl game every year he was under center and finished a perfect 17-0 in his career at Williams-Brice Stadium. Shaw threw for 56 touchdowns with only 16 interceptions and ran for 17 more.

South Carolina’s only Heisman Award winner in school history, halfback George Rogers owns the all-time South Carolina record for rushing yards with more than 5,000. He finished his illustrious college career with over 900 career carries, an average of 5.5 yards per attempt and 31 career rushing touchdowns.