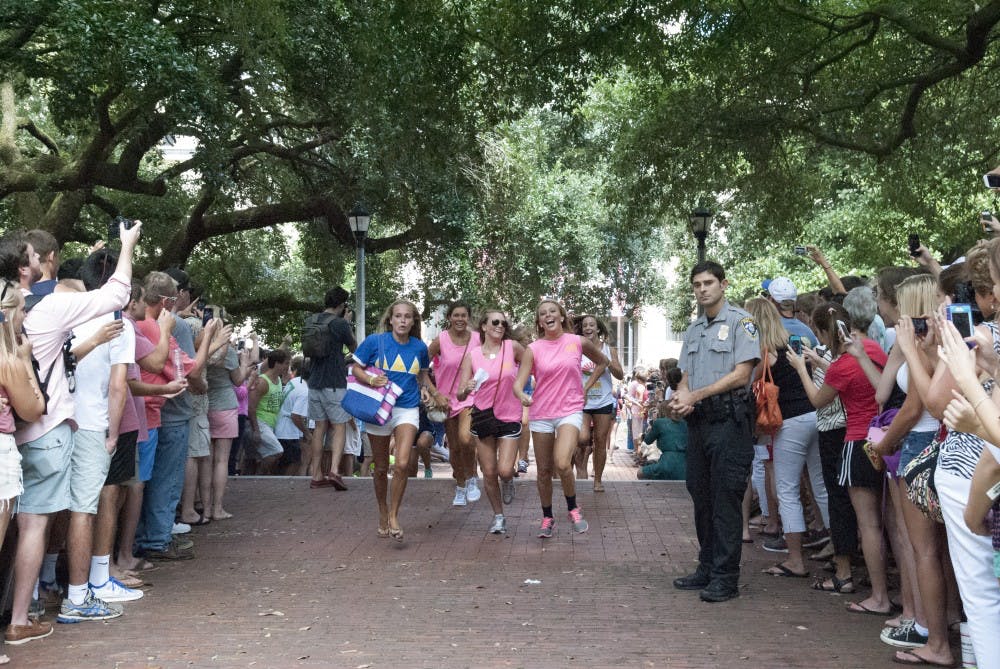 By Thad Moore, and Sarah Ellis

Before the glitter, the balloons and the masses of painted faces, there was only the noise.

From Greene Street — and Bull and Sumter streets — all that could be heard was a washed-out cacophony of cheers and whistles.

Euphoric screams by McKissick Museum gave way to tears of joy nearer the Maxcy Monument, as more than 1,300 women ran across the Horseshoe on Sunday afternoon, on their way to be welcomed as new members of their sorority families at USC’s annual sorority Bid Day.

Sarah Roof’s mom was a member of Zeta Tau Alpha at USC.

Growing up, Roof was surrounded by her mom’s sorority sisters and their children — “So I know these friendships last forever,” she said.

Joining a sorority was a natural choice for Roof, a first-year exercise science student from Chapin. In high school, she always wanted to get her toes into everything. And if she’s not busy, she’s bored.

Her mom didn’t pressure her to join a sorority or to become a Zeta, but she is excited that her daughter’s getting involved so early, Roof said.

“I wanted to really get connected on campus,” Roof said. “And the school’s so huge, it’s a good way to make it smaller and find a network of friends.”

Brianna Castoldi came into the sorority recruitment process “completely blind,” she said. She pictured sorority life to be a lot like “Legally Blonde” before coming to USC, because that was her only frame of reference.

A first-year public relations student from Boston who had been a cheerleader for most of her life, Castoldi was looking for a new kind of team to join. She had heard that sororities were a big deal in the South, so she decided to check out the recruitment process.

“I don’t regret my decision at all,” Castoldi said. “I think I’m going to be happy.”

Sunday afternoon, Roof and Castoldi were among the 1,313 women who received formal invitations to join one of USC’s 11 Panhellenic sororities. Each sorority accepted a minimum of 117 new members.

“There’s cheering, so much cheering,” said Haile Brant, a first-year business marketing student who waited anxiously to find out which chapter had extended a bid to her.

Bid Day is “probably one of the happiest days on campus,” said Alex Rodbell, Sorority Council vice president for recruitment.

“When the girls open their shirts and get to run to their new chapter … it’s kind of symbolic of what they’re about to embark on in the next year with their sorority,” Rodbell said.

For Katie Spell Hambrick, assistant director of Fraternity and Sorority Life, Sunday marked a different kind of celebration: A return to sleep and home, after long days preparing and nights spent in a hotel with Pi Chis.

The atmosphere on the Horseshoe reminded her of the chaos at last spring’s “College Gameday” set — except bigger, louder and brighter, with considerably more whistles, neon shirts and tutus.

USC football play-by-play radio announcer Todd Ellis tweeted a photo from the scene captioned, “This has scared me more than the Heels coming to town. #biddayvolume.”

The volume never subsided, especially not once the moment came when the women discovered which sororities they would now call their families.

As Roof, Castoldi and Brant stood in a circle with 15 other women, facing outward, their new sorority T-Shirts were placed in their hands behind their backs. They smiled and bounced anxiously.

Then they turned around and unfolded their shirts, erupting in ecstasy. Each had been invited to become a member of their top choice sorority: Roof to Delta Delta Delta, Castoldi to Kappa Kappa Gamma and Brant to Chi Omega.

“I was beyond excited,” Castoldi said.

She hugged another new member of Kappa Kappa Gamma.

Then they donned their T-Shirts and ran to be welcomed into their new family.