Give 4 Garnet raises money for the university 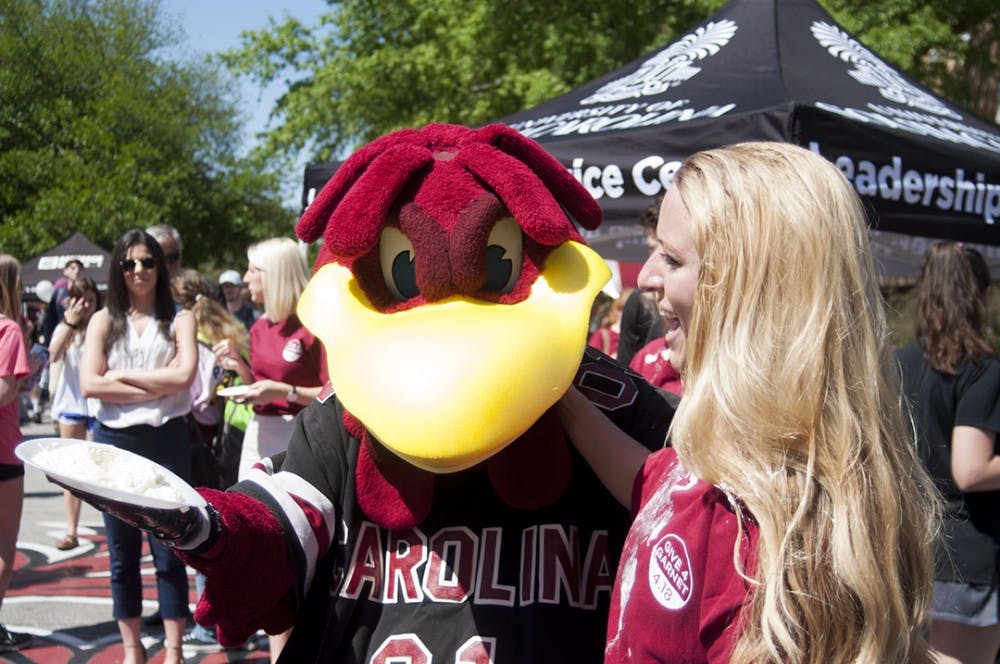 Confetti was scattered all around Greene Street on Thursday as Give 4 Garnet took over the area in front of Russell House. The event had tables from all different walks of USC student life raising money and giving out prizes to students walking by.

“It's turned into like a festival,” said USC's first lady Patricia Moore-Pastides. "I’m happy to be out here."

This is Give 4 Garnet’s first year holding a day reserved for giving back to the university and it has a goal of reaching $3 million. Anyone who donates online can specify what part of the university they want their money to go to, from the Alumni Association to the University Libraries.

“A lot of the money is coming from alumni, as well as students,” said Sara Chan, a first-year business student.

In the midst of the celebrations, the homecoming commission announced its theme for the fall: Sweet Home Carolina. For the first time, the theme was voted on by students. The announcement was greeted by a pep band and confetti.

“This is our first event and we had a really great turnout,” said Delaney Ruth, a third-year retail management student and homecoming executive commissioner. “I’m glad we really encaptured exactly what the students want.”

“It’s just a good way for us to get the Carolina community together, to just come together for a common cause,” Chan said.

As of 7 p.m., the university has raised $2,121,628 of its $3 million goal. The money being raised will go to programs that will help the students during their time at USC.

“There are so many needs that mainly our students have, but also our programs. And we get very little money from the state of South Carolina, so we end up spending a lot of our time in the President’s realm raising money,” Moore-Pastides said. “So this is one day when people who maybe couldn’t give us millions of dollars, but could give us 10 dollars will.”

Vincent Suarez, the senior development director for the College of Arts and Sciences, emphasized the benefits students with financial need would receive from the money raised during Give 4 Garnet in programs such as study abroad, student internships and undergraduate research.

“The focus will be for students interested in those activities that might not otherwise be able to afford it,” said Suarez.

Second-year accounting student Hannah Smith was excited about the event on Greene Street.

“I just came from class, so I thought I would come out and see what’s going on,” said Smith. “I’m gonna go home and get some clothes, actually, and donate for the clothes drive ... I feel like we should all donate because Carolina's such a great community, I don't see why you wouldn't do it."