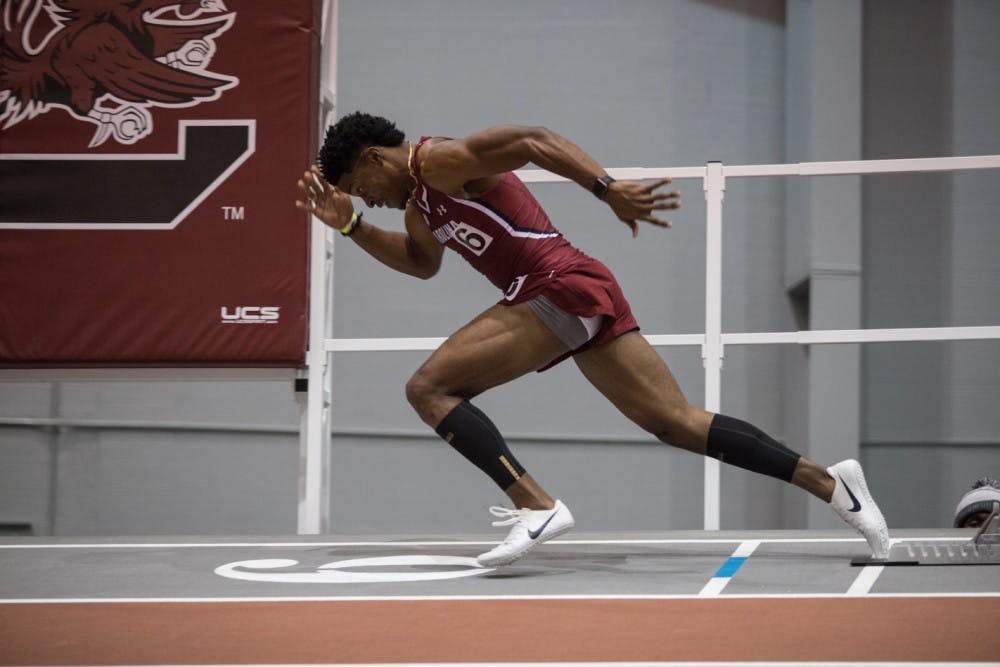 The Gamecocks were back in action this weekend and competed in the Carolina Challenge, earning multiple wins and breaking personal records and school records alike. South Carolina hosted a total of 48 collegiate teams over the three-day event for their second indoor home meet of the 2019 season.

Though the first day of events saw only one Gamecock athlete compete, the event in and of itself was historic. Carolina Indoor Track & Field Complex hosted a women's pentathlon and men's heptathlon for the first time.

South Carolina had no competitors in the pentathlon, but sophomore Benjamin Womble competed in the heptathlon, finishing seventh with a mark of 2,407 points. Womble matched his personal record of 7.45 seconds in the 60-meter and broke his shot put record with a throw of 11.44 meters. His previous record was 9.97 meters at the Darius Dixon Memorial Invitational in February 2018, 1.47 meters less than his new record.

Finding meets that host heptathlons is a challenge in the first place, so head coach Curtis Frye finds it exciting that South Carolina can host these events and give athletes the opportunity to compete.

"It's great that we can present special events like the pentathlon and the heptathlon here at Carolina," Frye said according to GamecocksOnline.com. "We're fortunate to have a facility where we can give [Womble], who is developing into a very good decathlete, a chance to take part in a meet."

On Friday, junior sprinter Quincy Hall broke his teammate Arinze Chance's school record in the 400-meter. Chance set his record of 46.15 seconds less than two weeks ago, only for Hall to make school history with a time of 45.84 seconds.

Hall's time of 45.84 seconds earned the Gamecocks one of three wins that day. The first win of the meet came from sophomore pole vaulter Timothy McEvoy who posted a mark of 4.50 meters.

South Carolina's success in the quarter-mile this season is not limited to the men's team, as redshirt junior Aliyah Abrams claimed the win in the women's 400, posting a time 52.58 seconds. Frye had positive things to say about both quarter-milers.

"Quincy can run," Frye said according to GamecocksOnline.com. "That's one of the most tremendously even races I've ever seen."

Regarding Abrams, Frye admitted to being worried about the fact that his athlete was in a heat with a Division ll national champion. However, looking back on it, he believes that being in a tough heat may have been what pushed her to go faster.

"What it did was push her hard and get her to go out in 24-flat, then she was strong enough to go around a young lady in the final 50 (meters)," Frye said according to GamecocksOnline.com. "It was a great run."

The Gamecocks rounded out the Carolina Challenge with another school record of 3.05.68 seconds on Saturday posted by the men's 4x400 relay team consisting of Chance, Hall, Otis Jones, and Ty Jaye Robbins. The women's 4x400 relay team made up of Abrams, Stephanie Davis, Tatyana Mills, and Wadeline Jonathas took first place as well.

The women's distance medley relay made progress with a time of 11:40.39 seconds that gave them a first place win as well as the second best time in school history. Frye said Allie Mueller provided a strong anchor to the quartet that allowed them to speed past Clemson in the final leg of the relay.

"We got behind (in the women's DMR), but Allie Mueller came on and came back," Frye said according to GamecocksOnline.com. "She led us to a great win, and then it was a great time. The school record is 10 seconds away. Who knows? We might find a way to get those 10 seconds."

The women's distance medley relay team will continue working along with the rest of the team as the Gamecocks head to Clemson next weekend for the Tiger Paw Invitational.