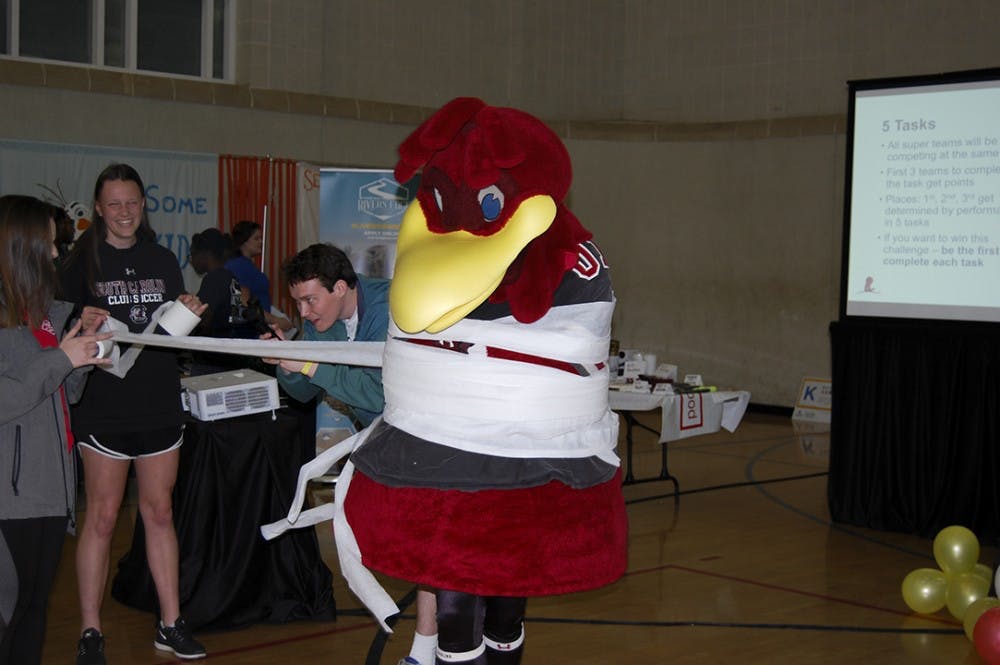 Students celebrated having raised $27,079 over the past year for St. Jude Children’s Research Hospital at the Up 'til Dawn event.

Up 'til Dawn is a community philanthropy event hosted by St. Jude Children’s Research Hospital and took place on Saturday morning from midnight to 6 a.m. at the Strom Thurmond Wellness and Fitness Center to celebrate the money students and organizations collected throughout the year.

Shelby Keith, a fourth-year public health student and the events and logistics director, said it is significant that the event takes place early in the morning. The founder of St. Jude's hospital, Danny Thomas, believed no child should ever die in the dawn of life, inspiring the Up 'til Dawn main event.

“We stay up from 12 a.m. to 6 a.m. in honor of all the patients that St. Jude has treated, all the things that they do to ensure that no family ever receives a bill for treatment travel," Keith said.

The event brought together not only students who had been individually fundraising for St. Jude throughout the year, but also student organizations, including sororities, Cockapella and Swype. Some came donning t-shirts for their representative teams and organizations, while others came dressed in looks inspired by children’s characters, such as Sleepy from Snow White and Sully from Monsters, Inc.

Jessica Rodders, a second-year marine science student who got involved with Up 'til Dawn individually, said she was excited for the event to begin after working to fundraise.

At the beginning of the event, Jasmine Cobb, a second-year psychology student who raised money with her hip-hop dance team Swype, expressed her excitement at what was to come throughout the morning.

“I’m looking forward to performing and seeing the other groups perform as well, and hopefully participating in some of these activities,” Cobb said. “I like how we’re so enthusiastic about it at literally one o'clock in the morning for a very good cause.”

From midnight to 6 a.m., students and groups participated in various games including “Minute to Win It," life-sized “Hungry Hungry Hippo” consisting of scooters and inflatable balls and a lip-sync battle, leading up to the reveal of the amount raised.

Keith, who first got involved in Up 'til Dawn through a friend of hers, said the event has come to mean a lot to her as she learns more about St. Jude's mission and purpose.

“I just love meeting the patient families that are so grateful to St. Jude for just helping them in the most terrible time of their life," Keith said. "And I’m really dedicated to the mission of St. Jude and how everybody is a family.”