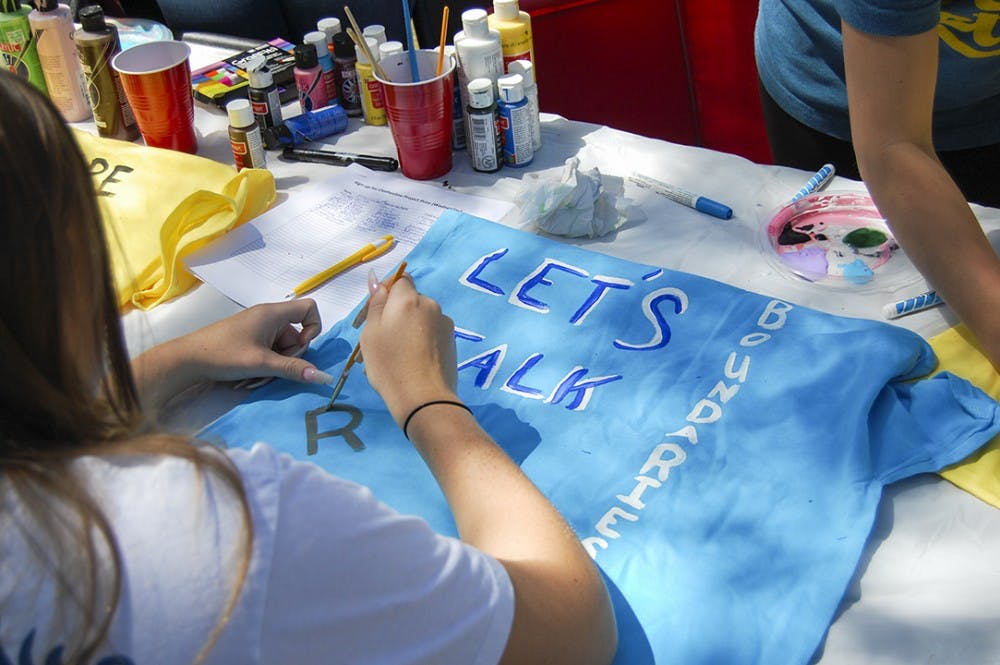 On a clothesline strung between a tree and a light post on Davis Field hang T-shirts in a variety of colors. On each is a message referencing an aspect of sexual assault.

“Clothes are not consent!” reads one. “Let’s talk boundaries,” says another.

Last week, the office of Sexual Assault and Violence Intervention & Prevention (SAVIP) hosted the Clothesline Project to advocate and raise awareness for survivors of sexual assault. Students were invited to paint shirts in support of survivors of sexual assault and relationship violence, whether to express their own experiences or stand up for those who have been affected.

The shirts were hung on a clothesline behind the table for other students to look at as they passed by on their way to class. The shirts addressed a range of issues, from callouts of rape culture to words of support for survivors. The students who designed the five most creative shirts were selected each day and won a prize.

A clothesline is used because, "Doing the laundry was always considered women's work and in the days of close-knit neighborhoods women often exchanged information over backyard fences while hanging their clothes out to dry," according to theclotheslineproject.org.

“[The goal is] to make people who perhaps are survivors of relationship violence or sexual assault feel supported by their community,” said Jennifer Taylor, the program coordinator for SAVIP's Bystander Intervention initiative.

“Also, we have plenty of people that are maybe primary or secondary survivors who want to make a shirt just to kind of express themselves,” she said.

The Clothesline Project started as a national program in 1990 to raise awareness about sexual and gender violence. Taylor said SAVIP uses this project as an opportunity to educate students on the services its office provides and ways to support survivors in the community.

Advocates are available in the Thompson Building for students to speak to confidentially about experiencing sexual violence, harassment, stalking or other behaviors of that nature. SAVIP's advocates are also available to students after-hours should they need help when the office is closed.

In addition to the clothesline display, SAVIP set up a booth at the Soda City Market last weekend for visitors to decorate T-shirts.

Lauren Payne, a second-year sport and entertainment management student, participated in making a shirt for the display to show support for survivors.

“I think it's cool to stand up for people that don't maybe want to speak out," Payne said. "This maybe gives them a chance to know they're not alone, so they can all come together, and we can support them."

Katharina Staecker, a first-year international business student, also decorated a shirt in support of the cause and to encourage survivors to report their experiences.

“Almost every single one of my friends has experienced sexual assault in one way or another, even guys, and I just want it to be known that it’s something that happens," Staecker said. "We shouldn’t be afraid to get help."

For third-year studio art student Karla Moore, painting a shirt for this project was more personal.

"It's just a big issue, and I mean, I've also had issues, like personal situations where I was not treated correctly. It kind of hits home for me, so I felt like I just should,” Moore said.

The Clothesline Project is one of many programs SAVIP has planned for the month of April, which is Sexual Assault Awareness Month.

The event will be at M Space in the Vista and will include food, spoken word performers and another display of the T-shirts.