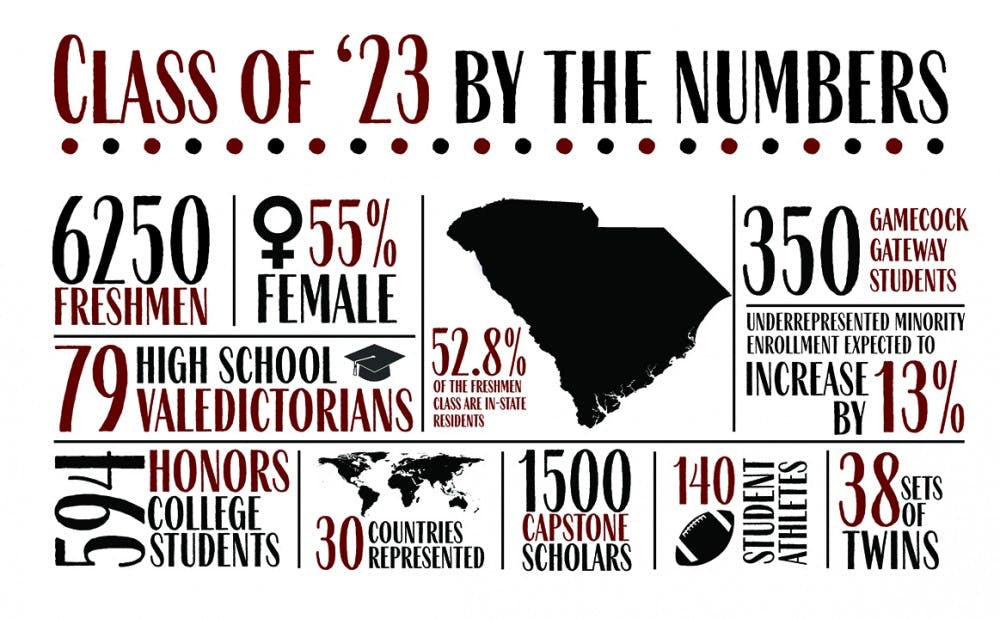 Traffic cones, welcome tents and a hydration station lining Greene Street last week marked a new beginning for the 6,250 students who moved onto campus from 30 countries for their first year at USC.

Christian Kolowich, a first-year criminology and criminal justice student from Georgia, moved into Capstone on Monday with the help of his parents. Since then, he has been out and about around campus meeting other students.

"There’s been a real sense of community among not just the people I’ve been talking to but everyone on campus it feels like," Kolowich said. "Everyone is totally open and OK to just talk to or randomly meet up with.”

Kolowich wasn't always sure he wanted to go to USC and originally had his sight set on the University of Georgia, but after coming to visit, he knew he wanted Carolina to be his home. He is looking forward to the organization fair to find clubs for things he's interested in, such as history and intramural sports, and he has participated in some fraternity rush events.

“It’s so unlike high school and any other experiences I’ve had up until this point that … I almost didn't wanna think about anything," Kolowich said. "It’s just been sort of go with the flow.”

First-year vocal performance student Daisy Lawrence drove down to Columbia from West Virginia a few days early for an opera audition at USC and moved into Woodrow's residence hall.

“I was excited to leave the nest and kind of go and adventure on my own,” she said. “The dorm was bigger than I thought it would be.”

Lawrence has spent her first few days attending community events such as Soda City with people she met in her residence hall and in her major.

“I’ve made a lot of great friends in the music department and in my building so far because of the activities," she said. "We’ve been kind of grouped together, it’s really great.”

She expressed excitement for big football games, independence and events with free food. She also hopes to join the off-off Broadway club.

“I really liked USC from the moment I stepped on campus,” she said. “I really like the spirit and the atmosphere and everyone is really friendly.”

Like Lawrence, first-year nursing student Jasmine Elam moved into Woodrow on Tuesday and hopes to find independence at Carolina.

“I’m excited, I’m a little nervous,” she said. “Everyone is really helpful and nice.”

The organization fair is set for Wednesday on Greene Street for new students to browse any clubs they could be interested in.

“There’s a lot of opportunity for getting into whatever you want here, there’s something for everyone," Kolowich said. "So I’m just looking for that something.”