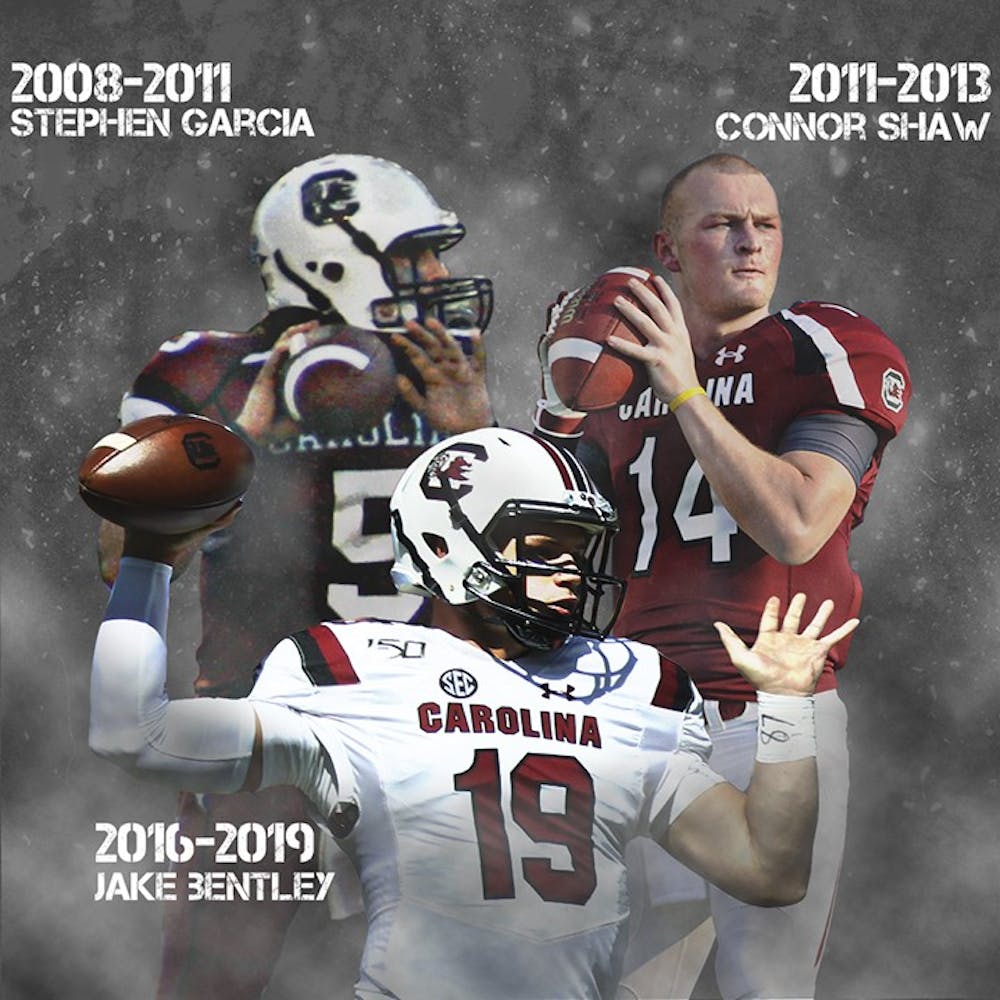 A look at the evolution of Gamecock quarterbacks this decade

South Carolina has seen a range of quarterbacks this decade over the course of two head coaching eras.

Some of the quarterbacks went down as legends, while others endured the program at its lowest point this decade.

Garcia went 13-3 overall as a starter at home and started all 14 games in 2010, completing 224-of-349 passing attempts. He earned national offensive player of the week by the Walter Camp Football Foundation after the upset win over Alabama.

Garcia now owns a degree in sociology and still passionately watches Gamecock football. He also believes in head coach Will Muschamp’s ability to lead the program.

“If there's anybody that can get those guys ready to go, I think it's coach Muschamp. I’m a firm believer in him; I love his fire, his energy," Garcia told The Daily Gamecock. "I think he's going to have these guys fired up, ready [to play]."

All of these personal triumphs and team victories for Garcia did not come without bumps in the road. Garcia was suspended from the team four times in his tenure at South Carolina. All four suspensions came during spring practices.

Garcia was then dismissed from the team in October of 2011 before South Carolina faced Kentucky. This led to the beginning of the Connor Shaw era in Columbia.

Connor Shaw is the winningest quarterback in school history, throwing a total of 6,074 yards and 56 touchdowns.

He was 27-5 overall as a starter and was undefeated (17-0) at Williams-Brice Stadium.

Shaw took over the starting job in the middle of the 2011 season against Kentucky. He never looked back, as he led South Carolina to three-straight 11-win seasons in 2011-2013 and led the Gamecocks to wins over Clemson in each of those seasons.

Shaw graduated in December 2013 with a degree in sport and entertainment management. He now conducts annual football youth camps with kids who want to learn the game, improve their skills and compete with others.

“It scratches the football itch,” Shaw told The State, referring to his football camps. “Football has given a lot to me, and it’s now a vehicle for me to give back. I have fun doing it. I love being in the environment with kids.”

Shaw was drafted by the Cleveland Browns in the 2014 NFL Draft and saw playing time.

Shaw is now a sales representative with Colonial Life, an insurance company in the Midlands.

Dylan Thompson got his first career start against East Carolina in 2012 when Shaw was injured.

He did not start again until the Clemson game in November the same season, when he led the Gamecocks to their fourth-straight win over the Tigers. Thompson completed 23-of-41 passes for 310 yards and three touchdowns in the rivalry game.

A few weeks later in the Outback Bowl against Michigan, Thompson threw a 32-yard game-winning touchdown pass to Bruce Ellington with only 11 seconds left. He finished the game for an injured Connor Shaw again, clinching South Carolina’s second-straight 11-win season.

Thompson entered the Central Florida game in 2013 after another injury to Shaw and had 261 yards in the win over UCF.

In his senior season in 2014, Thompson was team captain and led the SEC with 3,564 passing yards, setting a school record. He also led the SEC and set school records with 270 completions and 451 pass attempts in one season.

Thompson’s most notable win in 2014 was against then No. 6 Georgia, when he completed 21-of-30 passes for 271 yards and three touchdowns.

He currently works for the Detroit Lions as a character coach and was previously director of player development for Charleston Southern’s men’s basketball team.

After Thompson graduated in 2014, Connor Mitch won the starting job during the 2015 preseason camp.

He threw for 122 yards and one touchdown in his first start against UNC, the eventual 2015 ACC Coastal Champions.

A shoulder injury combined with a hip injury took Mitch out of the Kentucky game, and he was not able to gain strength and return to the field that season. He later decided to transfer from South Carolina.

Mitch has since enrolled at James Madison before announcing he was leaving their football program in February of 2017.

Perry Orth took over as quarterback after Mitch’s injuries in 2015. Orth also earned a full scholarship before the 2015 season.

“The feeling of getting on scholarship, there really wasn’t anything better,” Orth told The Daily Gamecock. “I remember calling my mom and dad and telling them I was on scholarship and ... just crying and thanking God for the blessing. It was just a day to sit back and reflect on all of the hard work that I had put in over the previous two years.”

He was named the 2015 most improved quarterback of the spring. Working behind Connor Shaw and Dylan Thompson early in his career motivated Orth to compete for the starting job even more.

After helping lead South Carolina to bowl eligibility in Muschamp’s first season, Orth graduated in December of 2016 with a Bachelor of Science in economics and marketing.

Orth is the founder, CEO and head coach of QB1 Athletics, a year-round quarterback training and development business based out of Columbia.

“Originally, it was just something to do on the side after work, just to stay involved in the game,” Orth said. “It turned into a legit business. Once you start coaching the kids and get to know them and figure out who they are ... you really get hooked. ... To be able to be like a big brother to them is pretty awesome.”

Orth is also a property and casualty commercial consultant with Insurance Management Group in Columbia.

"I find [selling insurance] to be very relative to football, because each and every day you have to compete to win a job," Orth said. "Whether you're throwing a touchdown or closing a deal. Both are great and rewarding feelings."

Brandon McIlwain began his freshman season in 2016 competing with Orth and played in eight games.

McIlwain decided to transfer to University of California — Berkley in 2017. In his time at South Carolina, he was also on the baseball team as a top MLB prospect, but he only recorded 10 at-bats.

McIlwain went to Cal for his redshirt junior season after electing not to sign a professional baseball contract.

He was drafted by the Miami Marlins in the 26th round of the 2019 MLB draft and spent last summer playing for the Florence Redwolves in South Carolina, a summer collegiate baseball team in the Coastal Plains League.

McIlwain has since decided to hang up his football cleats and focus solely on baseball at Cal.

Jake Bentley took over as quarterback in the middle of the 2016 season after graduating high school and enrolling at South Carolina a year early.

He was 4-3 as a starter his freshman year with 1,420 passing yards and led South Carolina to bowl eligibility, including an upset win over Tennessee.

Bentley finished his 2018 season with 3,171 yards and 27 touchdowns. He also set the school record for passing yards against Clemson with 510 yards against the eventual national champions.

Bentley’s senior season did not get off to the start he wanted, as South Carolina fell to UNC in the opener 24-20. News broke on Labor Day that Bentley will be out for at least six weeks with a foot injury.

This is unfortunate for Bentley, as he had a chance to set the school record for most passing yards in Gamecock football history.

True freshman four-star Ryan Hilinski was then announced as the starter for the Gamecocks against Charleston Southern.

Hilinski saw tremendous success in his first start, as he completed 24-of-30 passes for 282 yards and two touchdowns against Charleston Southern.

South Carolina's offense set a record of total yards in one game with 775 yards, the fifth-best in the history of the SEC.

Hilinski will see his first SEC action when the Gamecocks take on No. 2 Alabama this Saturday.