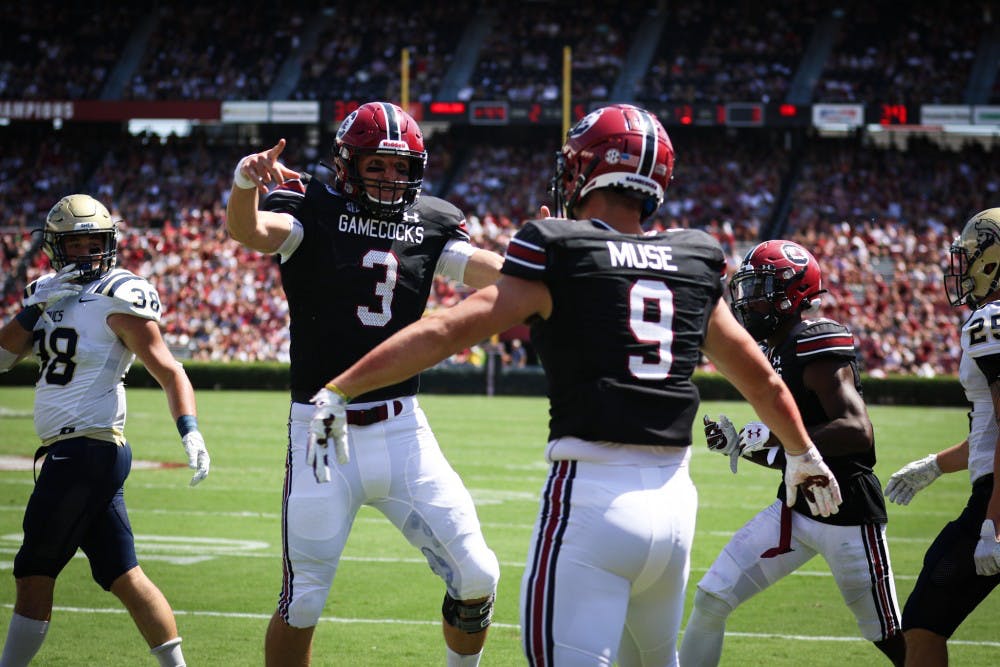 The South Carolina football team took the field at Williams-Brice Stadium for the first home game of the year against FCS foe Charleston Southern. The Gamecocks came into the game following a loss to North Carolina in week one.

Jake Bentley's injury on the final play of last week's matchup against the Tar Heels set the stage for highly touted true freshman Ryan Hilinski to take over the starting job at quarterback.

Hilinski came out of the gates hot, completing his first 12 attempts while scoring touchdowns on both of the first two drives of the game. The second of these marked Hilinski's first career touchdown via a four yard touchdown run.

Hilinski went on to toss two touchdowns, both to senior wide reciever Bryan Edwards, one of which went for 60 yards. He ended his first contest with 282 yards, two touchdowns and an interception.

"He displayed what basically all of us already knew," senior J.T. Ibe said.

Joyner also received snaps under center and was part of the receiver rotation. He rushed the ball four times for a total of 53 yards and recorded his first career rushing touchdown.

Muschamp is excited about the versatility and skillset of Joyner, saying he can "really help our football team in a lot of different areas” and that his "role is going to continue to expand as we move forward."

The game was full of firsts for the Gamecock offense, as freshman running back Kevin Harris also recorded his first touchdown on a seven yard rush. He then proceeded to break off two more long touchdown runs of 45 yards and 75 yards.

Harris ended the game with 147 yards on six rushing attempts and three touchdowns. Senior running back Rico Dowdle said he was not surprised to see Harris' early success, especially after witnessing him workout.

“Six-hundred pounds squatting ... you can see how powerful he is out there,” Dowdle said.

The Gamecocks' offense seemed to rebound well from the game against North Carolina, in which the running game struggled to make explosive plays. Five different Gamecocks recorded running plays of 35 yards or more.

South Carolina also set a team record in single game rushing yards, finishing the game with 493 rushing yards. Additionally, the Gamecocks set a single game record for total offensive yards, as the team racked up 775 total yards throughout the contest.

On the defensive side of the ball, the Gamecocks' secondary excelled. South Carolina had three interceptions, as John Dixon, RJ Roderick and Israel Mukuamu all came up with interceptions during the contest. The defense was able to hold the Buccaneers to 10 points and 267 yards of total offense.

The Gamecocks came through for the home opener and sent the crowd home happy with a 72-10 win over Charleston Southern.

After a disappointing opening game, Muschamp was happy with his team's performance but knows that much tougher opponents await on the Gamecocks' treacherous 2019 schedule.

“We’ll see next week how much we’ve come," Muschamp said, when the No. 2 Alabama Crimson Tide come to Williams-Brice Stadium.

Next week's contest against the Crimson Tide is scheduled for a 3:30 p.m. The game can be seen on CBS.