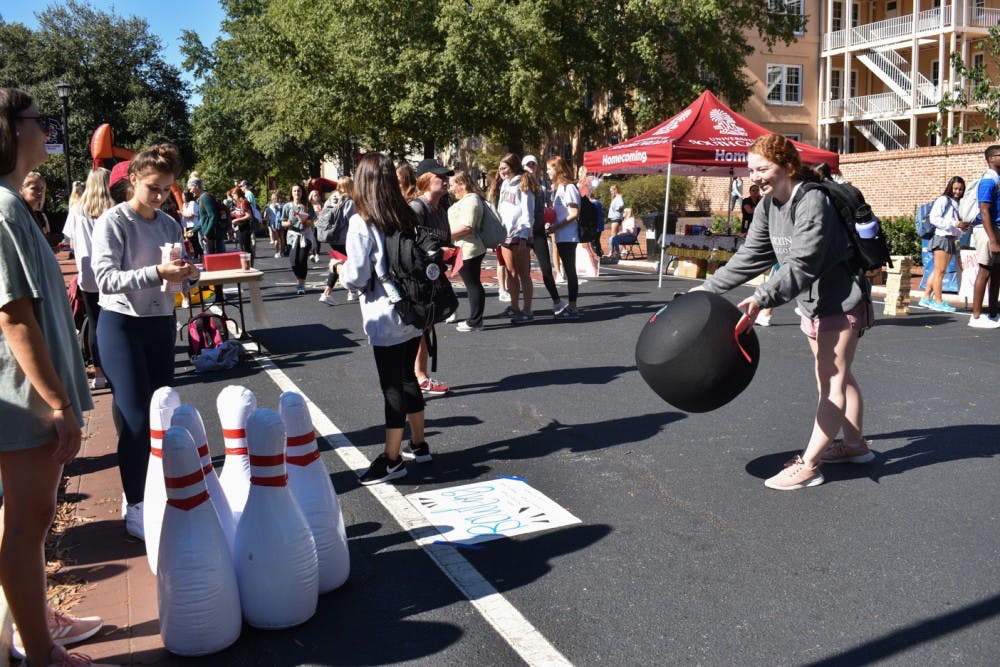 USC kicked off the first day of Homecoming Week with a Comic Book Carnival on Greene Street this afternoon.

The carnival featured games such as balloon pop, bowling and coin toss, and activities such as hula hooping and candy jar guessing.

First-year student Sarah Hartnett participated in four activities, but said her favorite was the duck pond.

Hartnett also said she liked that there was a lot to do at the carnival, and she’s looking forward to the “Spurs and Struts” event Wednesday at the Columbia Metropolitan Convention Center, another event lined up for homecoming week.

Fourth-year psychology student Alia Pease said she participated in most of the carnival's activities.

“The bowling I actually got a strike, which was a lot of fun,” Pease said.

Pease is a member of Carolina Productions, which helped the homecoming club. At the carnival, she sold tickets to this year’s homecoming concert, “Cockstock.” She said she liked how the carnival brought students together.

“I like the amount of people that’s there. It’s a lot of energy; a lot of fun,” Pease said. “Just a lot of coming together and doing something that is otherwise empty space on Greene Street.“

Students were able to play the games for tickets and redeem them for prizes such as T-shirts, stuffed animals, water bottles, gift cards to restaurants and even a Fitbit watch.

Shelby Johnson, graphic designer of the homecoming commission, said this year’s homecoming superhero theme was about highlighting the heroes of Carolina’s past and present.

“We looked at a list of the things they’ve done since the 1970s, and they have done, like, a million different ones, but we wanted to do something super different,” Johnson said. “So, we brainstormed a ton, and then we finally came up with ’The Power of Garnet.’”

The homecoming commission has several events lined up for the remainder of Homecoming Week.

The "Dynamic Displays" showcase and "Cockstock" will be Tuesday, "Spurs and Struts" and the "Marvelous Masterminds" trivia night will be Wednesday. "Carolina Heroes," a step show by the National Pan-Hellenic Council and "UofSCream" will be Thursday. On Friday, “Calling all Gamecocks” and “Carolina’s Got Talent” will take place, and Saturday will host the homecoming tailgate and football game.