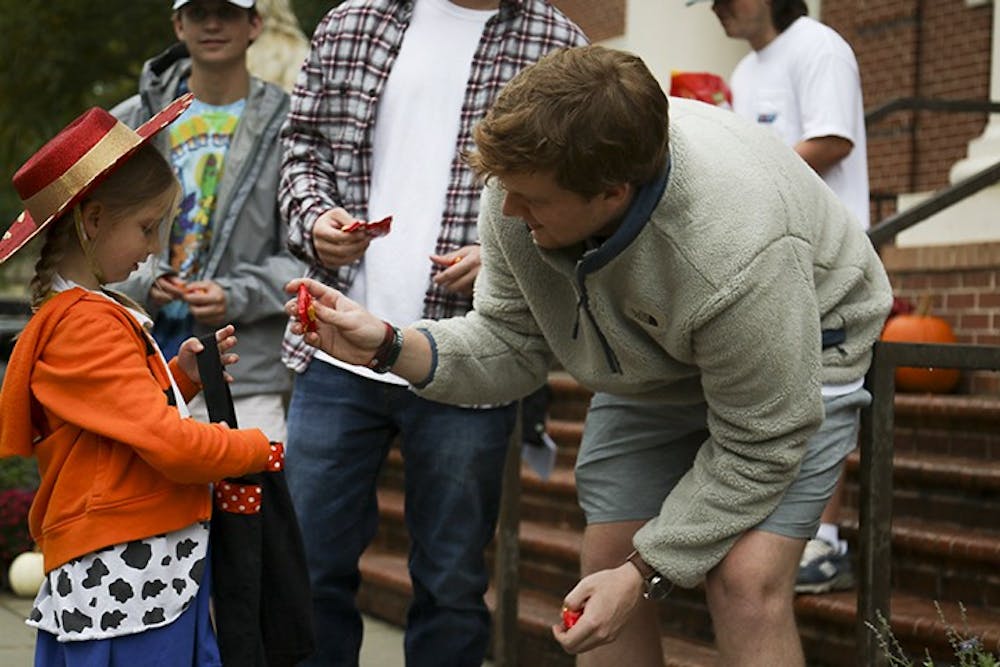 Greek Village holds annual Trick or Treat with the Greeks

“All of us have come together today to ... pair up with a fraternity and national Panhellenic organization, and provide candy to these children and offer a way for the community to get to meet Greek members — a way for basically the campus and the community to interact," third-year finance and marketing student Jillian Daellenbach said.

There were also games available for children. The Tri Delta house held a witch hat ring toss and a photo station set up for the kids. Kappa Sigma had corn hole and Pi Kappa Phi had a small basketball area set up for when the rain permitted play.

Second-year early childhood education student and Phi Mu member Hannah Wood said her favorite part of the event was getting to see the kids.

“Since I’m an education major, some of the kids from the art class I’m in are coming," Wood said. "It’s kind of cool to see the kids from my class come here.”

Katie Palmer, a fourth-year public health student and a member of Gamma Phi Beta, said she was most excited to showcase the side of Greek life that isn’t always shown in the media.

Second-year business student Palmer Brunetto said his favorite part was handing out candy to the kids and getting to see their costumes.

“It brings me back to my times of smiling and going to get treats and how exciting Halloween was,” Isgett said.

Some houses such as Tri Delta and Gamma Phi Beta had different themes or costume requirements that went with their stops. Gamma Phi Beta had a "casual costume" protocol and the women sported funky animal headbands and glittery witches hats.

“Even though I can’t really take part in [trick-or-treating] as much or in the same way, it’s still really cool to see [the kids] have fun,”second-year finance student Ethan Felkel said.