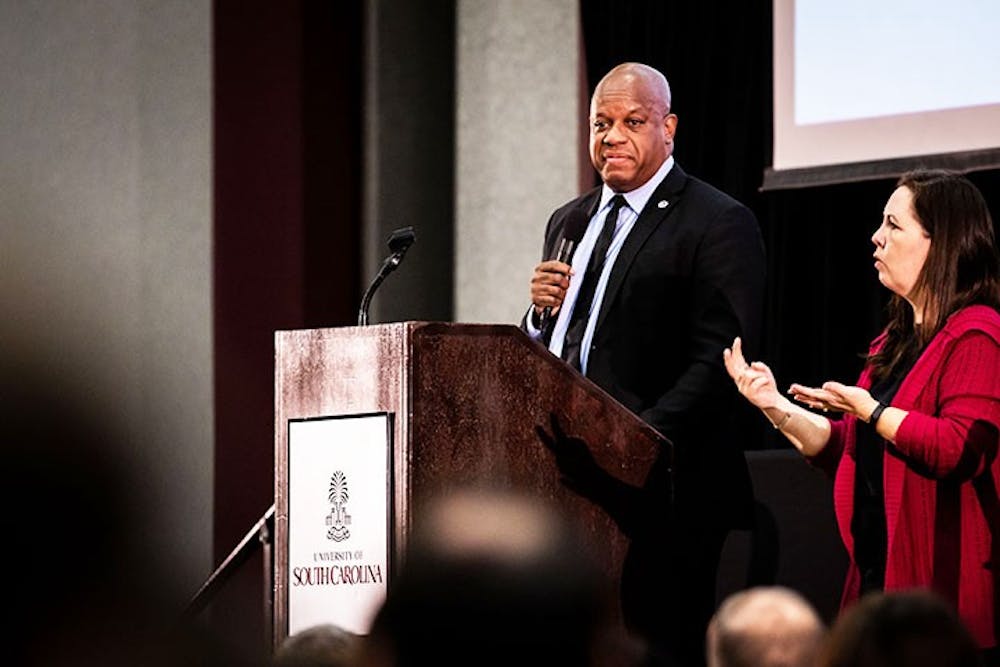 "Honestly, when I got the email saying that I was actually nominated, I was just, like, surprised," Kyanna Samuel, a fourth-year early childhood education student, said. "I never thought in a million days I would be the winner of this year's [award]."

In an effort to honor the legacy of Martin Luther King Jr., the Office of Diversity and Inclusion hosted its annual MLK Commemorative Breakfast and Social Justice Awards. The event was part of a series held during the university's MLK Commemorative Weekend.

This was the 37th year that the Office of Diversity and Inclusion held this event, and the organization's chief officer, John H. Dozier, said the event is bigger than honoring the legacy of Dr. King.

"It's also about talking about that work in ways that we are able to draw the community in, make sure that the community understands that we're a communicative partner in helping to make the legacy of Dr. King real," Dozier said.

Valinda Littlefield, an associate professor of history at USC, said she came to honor the legacy of Dr. King and catch up with old friends.

"It's always a way of recognizing the legacy that MLK left," Littlefield said. "It's also a very good way of seeing people you haven't seen all year."

Kim Rose, the office manager and procurement card coordinator for USC's Purchasing Department, said she came to hear what the speakers had to say.

"I think it's important to at least talk about social justice, and I am excited to hear what the speakers have to say," Rose said.

The program commenced with the invocation by the campus chaplain, Cheryl Nail. She was then followed by a musical selection from student gospel ensemble, A Touch of Faith, who sang the gospel hymn "We Shall Overcome."

Those who took part in the event enjoyed a southern-style breakfast of sausage, bacon, biscuits, grits, eggs and more while they listened to keynote speaker Rick Wade, who is currently the vice president of strategic alliances and outreach at the U.S. Chamber of Commerce.

The event ended with the recognition and presentation of the Social Justice Awards. Winners of the Social Justice Awards are chosen by a small committee that screens applications and makes a decision on who the year's winners will be. The nomination application is sent out to the student body and the community by the Office of Diversity and Inclusion early during the fall semester.

This year, the four recipients of the Social Justice Awards were Daniella Cook, C. Spencer Platt, Kyanna Samuel and Aisha Haynes, who was recognized for her work with first-generation college students and her work with people in the speech impediment community.

Daniella Cook, an associate professor in the College of Education, was recognized for work as an activist and her work in fighting against racial gaps in student achievement.

C. Spencer Platt was recognized for his work in the College of Education, where he works as an associate professor and as associate director of the Center for Innovation in Higher Education.

Lastly, Kyanna Samuel received the Student Social Justice Award for her community service and work as a student teacher in teaching lower-income and diverse students.

Award winner Haynes, who is the assistant director of the USC Center for Teaching Excellence, said this was her first year attending the event, but it won't be the last time.

"I plan on attending for years to come," Haynes said.